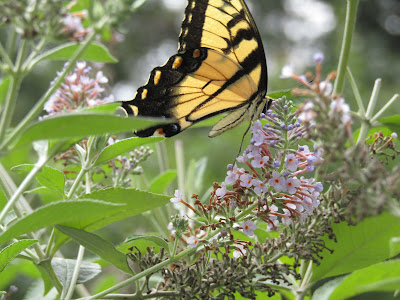 Hello, friends.  I hope your July was as good as it could be, in these interesting times.  Last week, I harvested tomatoes, cucumbers, tromboncino squash, red noodle and pole beans, apples, lima beans, eggplant, carrots, beets, and lambs quarter.  I canned tomatoes twice, juiced cherry tomatoes, and dehydrated tomato skins for bird suet.  Hopi dye sunflower seedheads, dyer's coreopsis, black eyed susan and dyer's chamomile flowers were gathered for future dyeing adventures.  I gathered lactarius indigo mushrooms.  It's said they get buggy quickly, which I found was the case.  I saved the good bits to dry and composted the rest.  I gathered chanterelles several days, and dried any that didn't make it into a breakfast scramble. 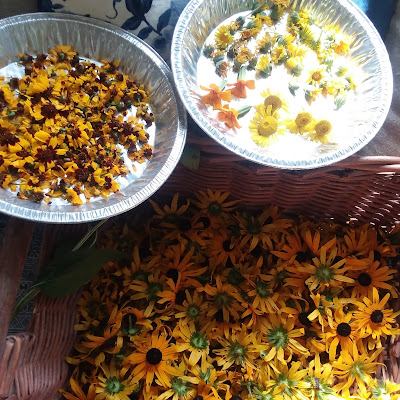 After an appointment, I headed to a nearby thrift store,  I didn't find any of the things I was looking for, but did spend .75 for two napkins and a greeting card.  I then headed to Food Lion, where the pup's dogfood was still $3 off, and seedless watermelons were $3.99.  I caught a $3 overcharge on some local honey, which they corrected.  Meals this week included asian cucumbers, zucchini frittata, zucchini tots, garlicky green beans, and sauteed squash with sweet onion and basil.  I redeemed swagbucks for a $25 amazon gift card.  While in the garden this week, hummingbirds and a praying mantis kept me company while I picked. 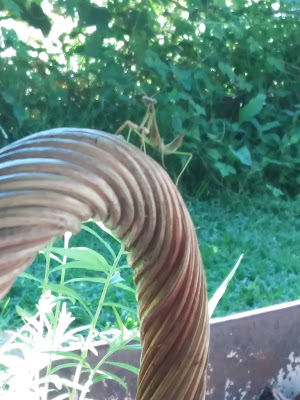 Not frugal for us, but after a number of inquiries about our old stove, which J listed for $50, he ended up giving it to a man that showed up.  Laundry was hung on the line.  Beet, carrot and flower beds were weeded.  I blanched and froze one meal of lambs quarters and two of lima/butter beans.  I found a branch from our oldest pear with lots of pears on the ground, we assume from squirrel activity.  It's getting close to when they begin to ripen, so I gathered up the good ones.  Lima beans were harvested again.  After cleaning and powder coating orders on Saturday, I made hummus and cut up cucumbers for our lunch.  While in the garden one day, I noticed these pots made by some sort of bee on the tromboncino trellis.  How cool, and perfect for the pottery community I live in.  Update: a friend shared info on the potter wasp. 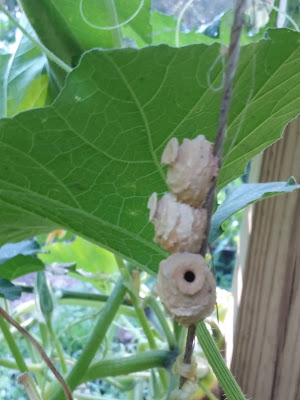 More elderberries were harvested, which finished filling a jar of tincture.  I also harvested lemon verbena, which is drying for tea, and stevia. In the past, I've dried stevia, but this year, I'm trying an extract.  I tried a new recipe, for Lemony Ricotta Pasta with Basil.  It sounded like summer to me, and fit the bill.  On an evening walk, I was happy to notice honeybees working wild sumac flowers along our path.  I'm amazed at how quickly our new oven pre-heats.  It takes maybe three minutes, and used to take 40 minutes or so.  Hard to imagine.  We knew our oven was on it's way out for a while.  This will save so much time and gas!  Much of the oregano is flowering, but I was able to harvest enough to fill a pie tin, which is drying for winter use.  J harvested some of our second round of corn.  The Japanese beetles have been eating the silks, so I was afraid it wouldn't amount to much, but they were mostly filled out.  We enjoyed it with some sliced tomatoes, and the leftover pasta.  Homemade ice cream is on the menu too; toasted almond this time.  Ah, summer days.  Wishing you a week of seasonal pleasures, friends.

Those pots on the plants are incredible! How'd they know they'd fit right in with the local artisans? ;0D

Home-grown corn is not something I have yet tried, but I see it in our future!

Isn't the weather a pleasant surprise today? Only 83 and low humidity! Love it.
Hope you were safe from the recent storm.

Glad to catch up with you after being gone on a dog-sitting job for a week.
Enjoy your week!

So thankful for the weather! We got a bit under 2.5" of rain, and no real wind. Corn has been our nemesis, but we keep trying.

I love the little pots! I once did a workshop with Ardrian Arlo and she talked about watching swallows make their nests and how it inspired her textures on her sculptures. So much inspiration in nature! I made squash tots last week but can't say I loved them, I think zucchini would be better, the squash was too moist.

Nature is surely inspiring. You may already do this, but after grating the squash, I put it in a colander with salt for a half hour or so, then squeeze it before proceeding with the recipe.

Congratulations on the rain! I am envious. It has been raining for two days now - stopping and starting but it hasn't amounted to much. However, I'm NOT complaining! I will take all I can get at this time of the year.
Jeannie@GetMeToTheCountry