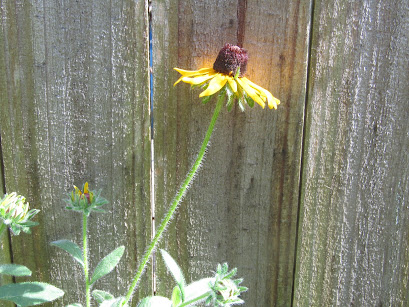 Hello, friends.  On Monday, J's business partner took the day off, which meant the shop wasn't off limits.  I painted orders, then drilled holes in a canister lid, which I turned into a compost crock for my shop.  That night's dinner was mostly from our garden, with caprese salad, asian cucumbers, and a squash dish with tomatoes, sweet onion and corn.  We've now gotten three fairy eggs.  I'm still thinking it's the one chick that hatched out this spring, but I've not seen her in the nest box, so am not totally sure.  This chick also shows rooster behavior, so we're rather confused.  I made a soap delivery, and figs were offered to me.  Most of the ones he picked were so underripe, they were hard.  I'm doubting they'll be good to eat, but I have them all on a platter to see if they'll ripen.  Whatever doesn't will probably go to the chickens.  Our local little grocery store had corn 3/.99.  While not a fantastic price, the corn was excellent, so I got 9 ears to freeze.  Before I got around to freezing the corn, I decided to use three ears in a corn zucchini chowder, which was very good.  The weather has cooled enough that we are able to open windows most nights, which makes us both happy. 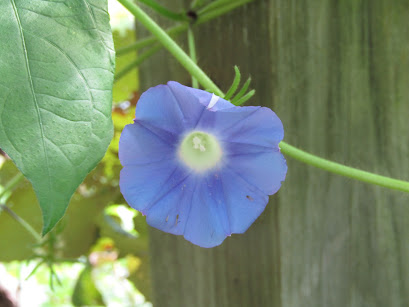 I made a veggie BLT with our tomato, but didn't have any lettuce, so subbed basil instead.  There was another nice flush of chanterelles this week.   I decided to make a pasta dish using some and our parsley, and it was delicious.  Another night, I made pizza using the chanterelles, our oregano, onion, peppers, tomatoes, along with olives and garlic.  I've had a sick hen for a couple of weeks.  Nursing chickens is hard for me, as they never seem to have the exact symptoms of anything, so it's always a guessing game.  I did a number of things to try and help her, but sadly, I found her dead on Saturday.  You're always close to the circle of life on a homestead.  My computer has been acting up, so I took it to town to be worked on.  When I arrived, the owner had run out to pick up parts, and would be gone about an hour and a half longer.  There are two thrift stores nearby that I hadn't been to this year, so I headed that way.  I found a number of treasures, including 4 shirts, a cardigan, merino sweater, three fleece vests and a pair of sneakers for around the homestead.  Both stores required masks and people mostly social distanced.  It did my heart good to do some thrifting!  Everything was washed, and dried on the line for two days. 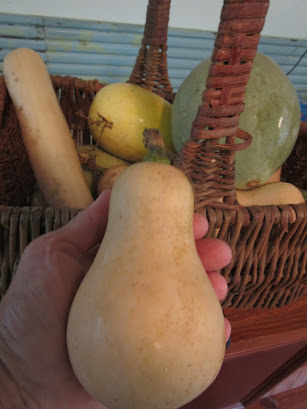 Eggs were boiled for us and the pups.  I made egg salad for us, and used two of our apples in a salad.  More winter squash were gathered, as their vines had died.  All the squash this year are smaller than average, but there are enough of them that we'll still have plenty.  This bunch weighed in at over 11# of squash.  On Friday, I canned more tomato juice, and some jars that didn't seal the first time.  Everything was canned 25 minutes, as that was the highest time.  The tomato juice was the lowest, at 15 minutes, but it won't hurt it at 25 minutes, except possibly a slight loss in nutrition.  All the jars sealed this time.  I've been using a mishmash of lids, from various places.  I don't know if the lids were the problem with sealing, but I'm glad this round was a success.  I was happy to see bluebirds enjoying one of the bird baths.  Many figs have been enjoyed fresh.  I also made two loaves of fig bread with sherry, one to enjoy now, and one to freeze.  Oregano and lemon balm were gathered and dried.  On Friday morning, I noticed all the gifted figs sitting in a platter at room temp had turned into a science experiment.  Oh well, it will make good compost. 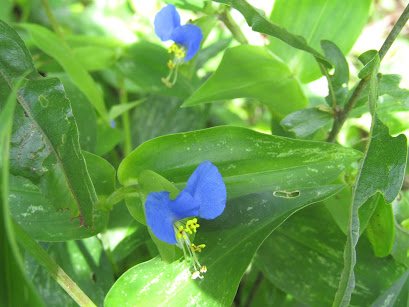 The migrating hummingbirds have arrived.   There are often four fighting it out at the feeder.  I hung a second feeder, so they can all get their fill before they head on their long journey.  The ants decided the inner rim of the bird food barrel was a good place for a nursery, as they did last summer.  I learned then that peppermint essential oil works to move them, so rubbed some anywhere they weren't on the rim, then put the soaked pad in the barrel.  The next day, they were gone.  J started on the chicken coop renovation.  It will enlarge the coop, keep the roosts in one area, and the nest boxes in another, which will help keep the eggs cleaner.  I will also have egg access from outside the coop, which is how the first coop on this land was set up.  That's a really nice feature, especially nice on mucky days.  I enjoyed watching a squirrel devour a large mushroom near our porch.  The purchased corn was blanched and frozen.  I made hummus for lunch on Saturday, and cut up our cucumbers and peppers to enjoy it with.  Our pawpaws are just beginning to come in.  I enjoyed one in a fruit salad, and another in a smoothie.  Our figs were used in both as well. 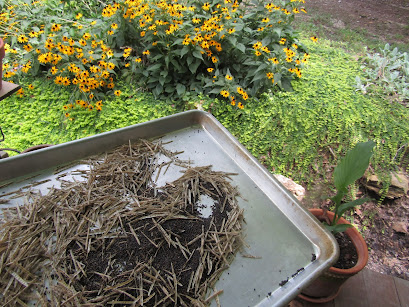 On Sunday, J found a hornworm on a tomato plant.  When we started looking, we found lots of them, 9 in all I believe.  The chickens enjoyed them for a snack.  I finally got to cleaning and winnowing the greens seeds we'd saved.  First was a mix of kale and turnip seeds.  Next was what J thinks was collard seeds.  We both need to work on labeling things.  That's the turmeric in the right side of the photo.  I fertilized the pomegranates, olives, cherry tree, and a few other random things.  Earlier in the week, I harvested two potato plants whose tops had died.  There weren't a lot of potatoes, but a few more than what were planted, which is a plus.  We staked and tied up all our eggplant and a little volunteer tomato.  For dinner, I made pasta sauce with our eggplant, tomatoes, tromboncino, basil and rosemary.  At the weekend's start, we were all caught up with orders, and grateful to have time to work on some of our chores and projects.  Of course,  we're also grateful for the orders we received over the weekend.  It's all good, and always keeps life interesting.  Wishing you an interesting and abundant week, friends.

So sorry about your girl. I am not looking forward to dealing with sickness and death with my chooks in the future.

It sounds like you are able to eat so often from the garden. What a treat. Are y'all vegetarians? Every dish you talk about sounds so good. I am just not too ambitious anymore in the kitchen. I'd rather be outside. ;0D I make a sandwich I call an ALT, avocado, lettuce and tomato, although I don't think I can eat tomatoes anymore. Maybe I'll sub out the tomatoes for some vegan cheese.

We love thrifting too and miss doing that as a family. Glad you found some goodies.

Thanks, Daisy. It's always sad when we lose one. I'm a vegetarian, but Joseph is not. When we met, I told him I'd cook vegetarian, and he's welcome to cook anything else he wants. I'll have to try your ALT. It sounds good.

I hate that one of your girls died. Even though they are farm animals, you still love them.

Good job saving the seeds. I am horrible at labeling things in the garden. Looks like you might be starting a seed bag of "assorted unknowns" like me. Just toss them all in and be surprised when they sprout the next year.

She was such a sweet one too, Jeannie. Thanks. I think you're right, about our saving unknown seeds. Whatever they are, we liked it. Surprise can be good :o).