A Slow Start to Summer 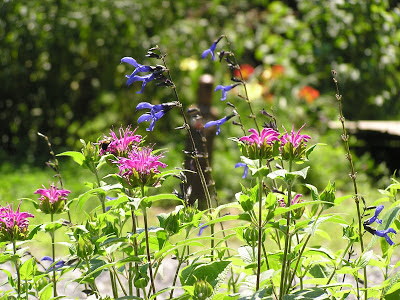 The garden work has taken place between showers.  It's been an unusually wet year so far.  We are about 6 inches above average rainfall.  The garden was off to a slow start, but intermittent warm days have helped it along.  Joseph and I put bean supports up this evening, and I put cages around the eggplant.  There are at least a dozen green tomatoes.  Every day, I look for blooms on the cucumbers and squash... patience.  I made potato salad with this year's first potatoes tonight.  Garlic was harvested last week. 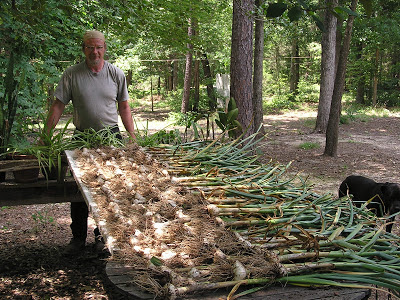 Our first ever gardenia bloom. I noticed today that two more had joined it. 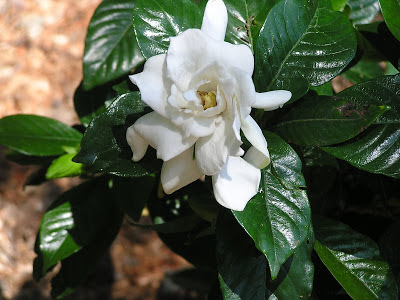 I've been freezing lamb's quarters, and canning mixed berry jam (raspberries, blackberries and mulberries).  It's beginning to feel a bit like summer.

this blended coffee drink. I'm of the age where sleep can sometimes be hard to come by.  I enjoy an afternoon cup of coffee, but rarely  make any for the sake of sleep. This iced drink uses only 5 cubes of  coffee, an amount that doesn't seem to affect my sleep.  Yay!

this summer treat, in Sicilian Pistachio.  My Mom's parents were Sicilian immigrants.  Joseph surprised me with some a few days ago, and I'm savoring it little by little. 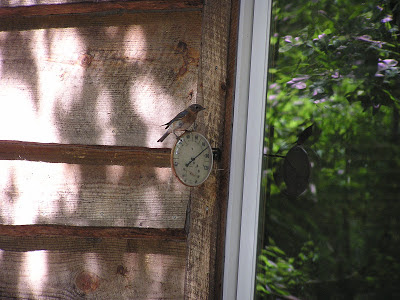 A pair of bluebirds was determined to get into one of the windows in the house, and flew from window to window.  I've heard of male birds attacking their reflection in windows, but this behavior was new to me. 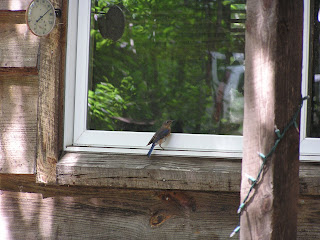 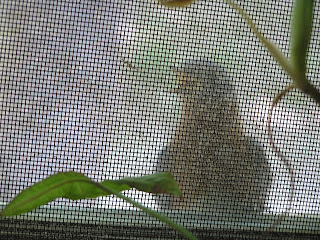 The pair were literally hurling themselves at the windows, and nothing would deter them from their mission. 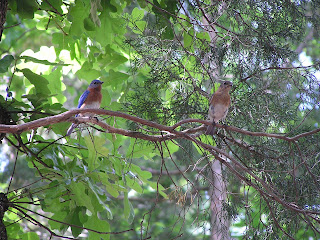 They chirped discontentedly, and also tried the large, half-round window at the shop.  They finally gave up after a few days, finding, I would assume,  more appropriate housing. 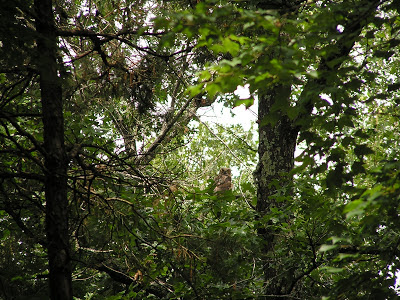 Then this big guy showed up last week, which I believe is a Barred Owl.  I've often heard its "Who cooks for you?" call, but this is my first sighting.  It may have heard the recent sound of chicks.  Speaking of chicks, they are now in the coop with the older birds.  They are in a large dog crate, so they can see and get used to each other.  In the evenings, when the older birds free-range, the chicks get the run of the coop and small yard.  We'll let them grow a bit larger before fully integrating them into the flock. 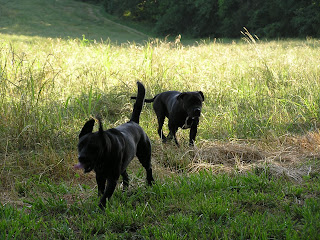 The pups?  Well, they're always up for a good walk. Have a lovely weekend, friends!
Posted by Laurie at 8:24 AM 1 comment:

Today I'm sharing a recent project on the homestead.  We've been in desperate need of a new chicken coop.  The original coop was built quickly with salvaged materials a year or two after moving to the homestead, around 1998.  It's done remarkably well, but the roof leaks and some upper walls are chicken wire, which gets covered in the winter with old sheets or plastic sheeting.  The chickies really need some new digs.  Enter the outdoor pantry, a small shed which holds all the food that can't fit in our home pantry, all our canning jars and supplies, paper goods toiletries... you get the picture. Joseph came up with the brilliant idea to enclose my potting area for a pantry, which was already under roof and butted up to one wall of his personal shop.  Then, we'll be able to transform the old pantry into a chicken coop. 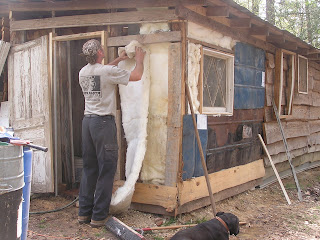 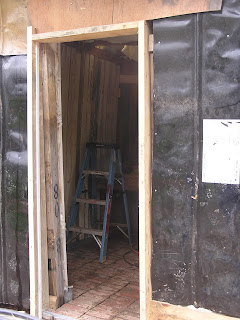 Here is the pantry already framed, with a brick floor put in.  We had several steel drums, which Joseph cut open and flattened.  It will help make it critter-proof, plus we weren't sure how long the sawyer was going to take to cut our siding boards, and needed some sort of siding to keep the insulation dry.  The insulation is some a friend had leftover from a job and donated.  The bricks were free... some years back, a truck hauling bricks overturned nearby.  My ex was a volunteer on the fire department and helped clean up the mess. 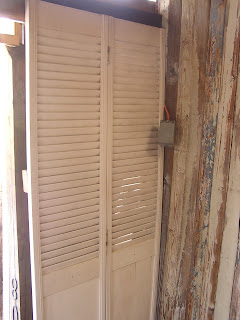 Inner walls were mostly made from boards I salvaged from the old store a mile up the road, and had stored.  They were very chippy, which I liked, but I gave them a good scrubbing to clean them and get any loose paint off.  We still had a few bare spots.  A folding door we ended up not using in the house was a perfect fit for one wall. 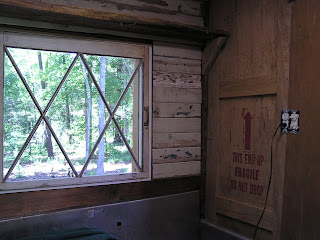 This wall was created from a crate Joseph had received shop materials in. 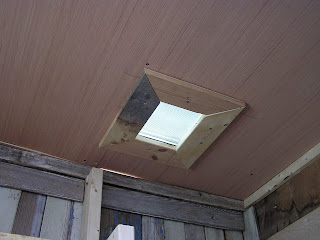 The roof above this spot is a piece of corrugated polymer roofing, which we have in a couple of areas to allow for daylighting. I had a glass block stored, so asked if we could use it in this area of the ceiling, which will often allow me to see without the need for electricity.  An indoor and outdoor light were installed as well. 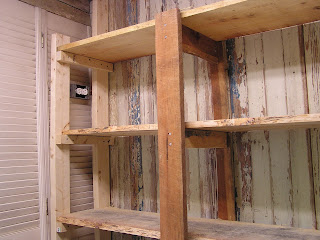 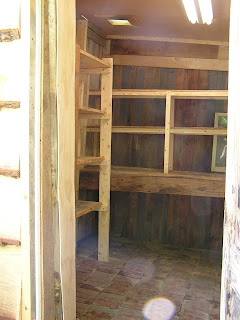 Shelving went in next. 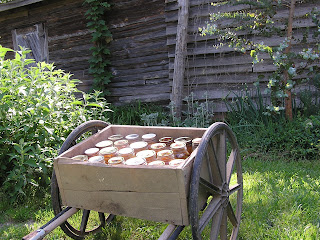 Then we began moving the contents of one pantry to another.  I find a multitude of uses for this little cart, which Joseph made using wheelchair tires he rescued from the dumpster when he worked in healthcare. 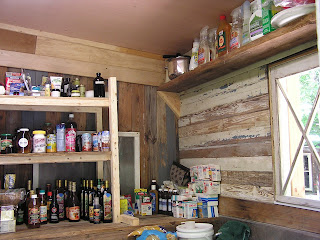 We had almost everything on hand.  The siding was $30, 3 pieces of luan plywood for the ceiling $45, 6 -2 x 4's $18, 2 outlets and a box of nails were less than $20, so not much over $100 was spent.  Sometimes it just takes a bit of creativity.  I haven't taken a photo specifically of the finished outside, but have been enjoying it for photo shoots, seen here behind a Whynot Pottery soap dish. 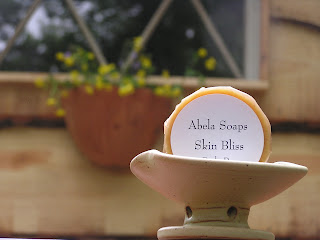 Someday we'll build a room onto the house, which will include a workspace for me and a pantry to store everything that is here.  But for now, this is much closer to the house, which makes me a happy camper.  It's a tight, cool space.  I can see all sorts of possibilities when it's no longer a pantry.