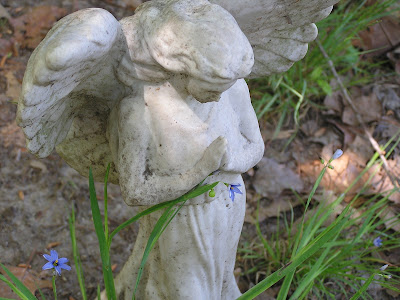 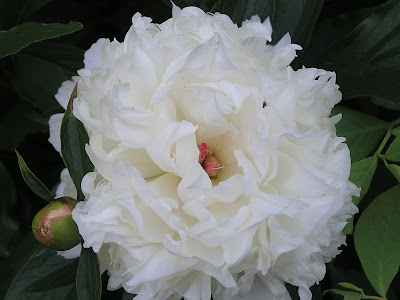 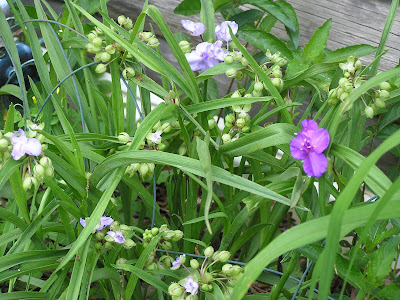 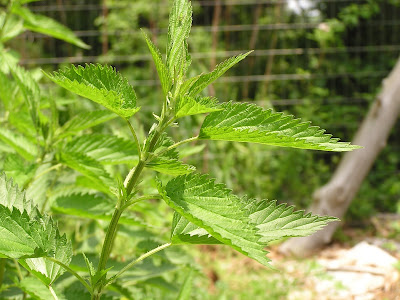 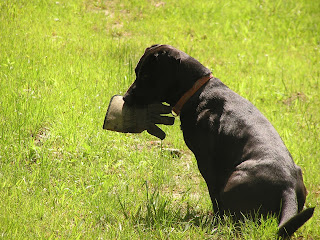 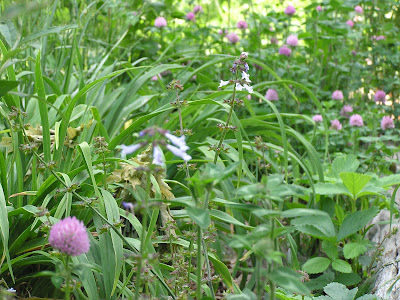 So many things are blooming now, it makes me happy every time I go outside.  I transplanted some Amsonia (bluestar) and some Chrysogonum virginianum (Green & Gold) from down near the creek to the part-shade garden, and a couple of other places.  I've got some pink Speedwell, and a mixture of coleus to plant this week.  Wishing you pretty blooms and a happy week, friends!
Posted by Laurie at 6:30 AM 1 comment: 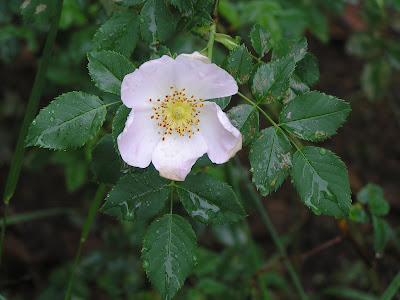 It's a rainy Wednesday, here on the homestead.  The guys asked me to take some pics of one of their shop projects, and I snapped a quick one of this rose along the walk, the first one planted here. 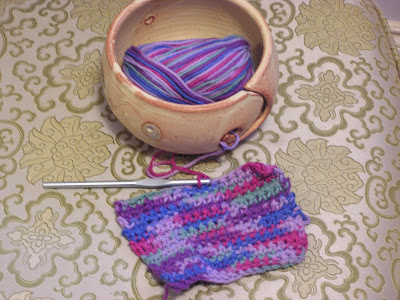 Anne helped get me started on a potholder Sunday, and I've added a few rows every day. I'm really liking the thick feel of it. You crochet a long strip, fold it upon itself, then sew it together. What crafty fun are you up to these days?
Posted by Laurie at 10:53 AM 5 comments: 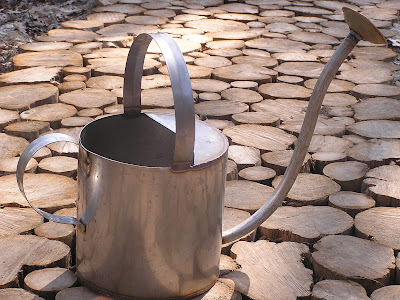 My favorite watering can had sprung some leaks, so Rick & Joseph created a new one for me in their shop.  As it's stainless steel, it's a bit heavier, but it will never rust.  I hope one of my nieces or nephews gets bit by the gardening bug, so I can pass it on to them. 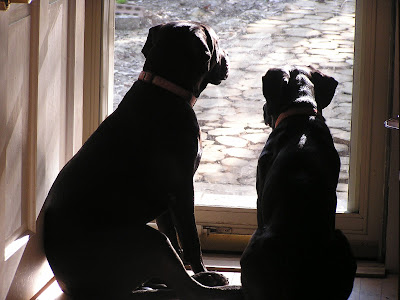 I'm looking forward to another fun day at Mud & Suds. As we have time in between customers, Anne is going to teach me to crochet a new item or two.  Happy Earth Day friends! 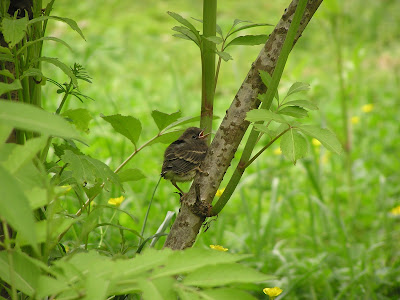 Do you see that little ball of fluffy sweetness among the branches?  I was in the midst of sewing when Joseph asked me to put the pups in the house, and told me he had something to give to me.  There is a large oak tree that shades the shop.  The guys were working outside when this little fledgling had a bit of a rough first go, and landed on the ground near them. I put it in the orchard, with Mama & Papa bird, yellow finches, hovering and chirping nearby.  I watched from afar for a few minutes, but then left, to give them some space.  When I returned, they had flown off. Another happy ending! 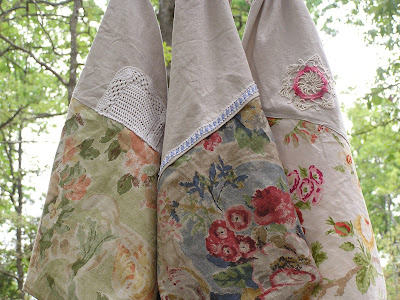 I had been sewing some laundry bags, to take to Mud and Suds this weekend.  I was so pleased to nab some natural linen and linen blend fabric at the thrift store not long ago, to make them with. I added some vintage touches, and they turned out even better than I envisioned.  I'm finishing up the last one.  There have been some rumblings, and the rain is supposed to start any time, so I wanted to get a picture of these at least.  I did not follow any tutorial; just began piecing together and sewing.  I did find a page from Sew, Mama, Sew!, which has several lovely looking tutorials, if you're inclined to give it a go yourself.  Hope you'll come by the show this weekend, and let your friends know too (shameless plug).
Posted by Laurie at 4:21 PM 1 comment:

Labels: drawstring bag tutorial, Mud and Suds in the Yard 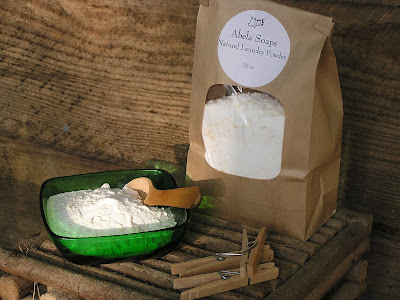 Things have been busy, with getting ready for the Mud & Suds show next weekend.  It's been a lot of fun getting some new glass garden flowers finished, adding an antique doorknob to one of J's metal garden flowers, and packaging up my new laundry detergent.  I hope to finish up some other laundry products this week after I get the last of the soap wrapped, and will share them if I do.  Have a marvelous Monday, friends!
Posted by Laurie at 8:25 AM 3 comments:

Labels: Mud and Suds in the Yard, natural laundry detergent 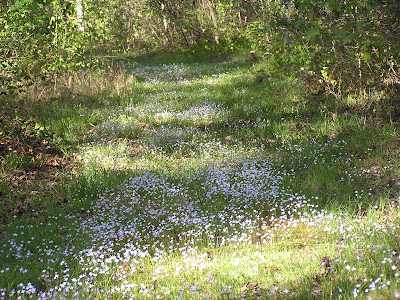 There was a frost here last night.  J & I covered all we could with row cover, sheets, burlap and whatever else we could scrounge up.  The kiwis, potatoes, some grapes and the uncovered figs were pretty hard hit.  As this was the first year of kiwi buds, we hope they'll come back.  I'm looking forward to eating some homegrown kiwis.  We cut our first two roses last night as well.  Hopefully the rosebuds on all the bushes survived, and we'll soon have many more flowers. 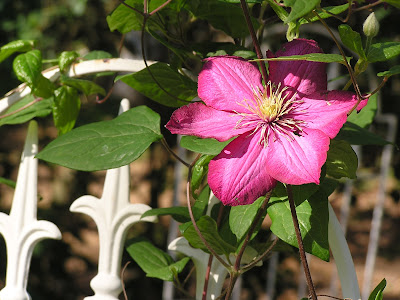 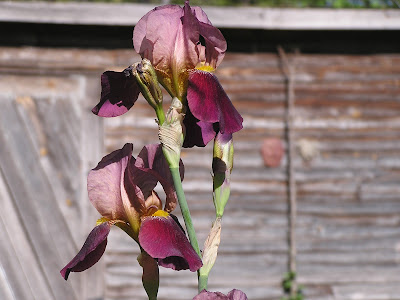 The clematis and lily of the valley have been blooming, along with spiderwort, red clover, iris and pink phlox. 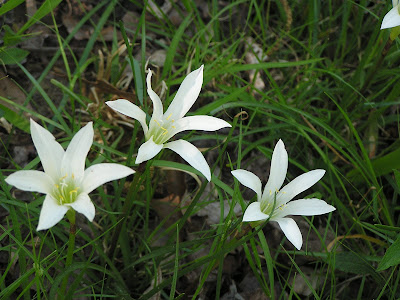 The atamasco lilies began blooming this week along the path. 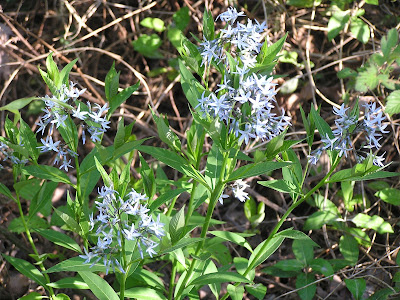 It's always a treat to ID a new native plant on this land.  On tonight's walk with the pups, I found some Amsonia blue star down at the seasonal creek.  Blue is my favorite flower color, so I was especially excited to find it.  In addition to a good sized clump, I saw two smaller plants, and am pondering trying to move one or both to the part-shade garden.  Oh, I do love spring!
Posted by Laurie at 8:10 PM 3 comments: 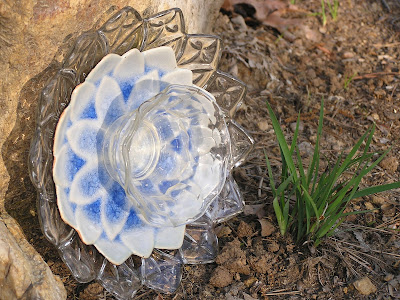 Since sometime last year, I've been keeping my eyes open for vintage glassware in colors and scalloped shapes. 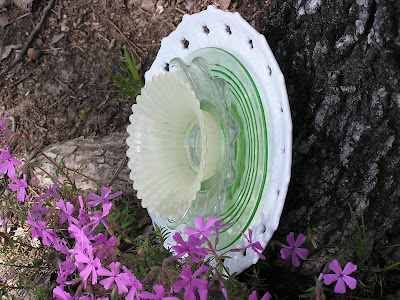 As I'm frequenting thrift stores only rarely these days, it's taken me some time to gather enough to work with. But this weekend I finally felt I had enough to play with, and am pleased with my first garden flower creations. 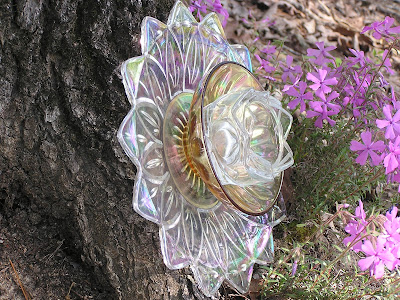 I'll be attaching "stems", so they can be planted in the ground or a pot, and I'm pondering if they need something more in the middles, or if I should leave them as is.  Suggestions would be most welcome. 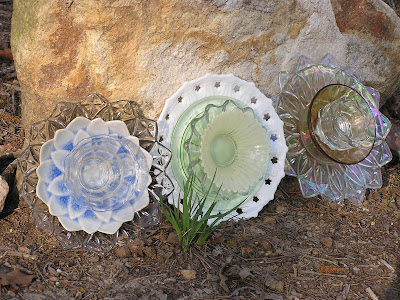 They'll be making their debut at Mud and Suds in the Yard.
Posted by Laurie at 4:34 AM 5 comments: 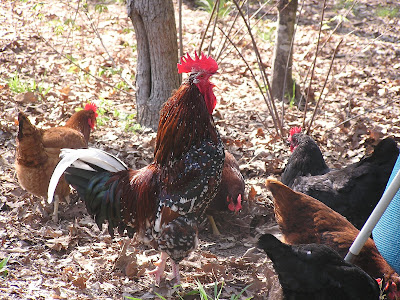 There are two compost bins we use on the homestead.  When one fills, we begin using the other to allow the first to do it's lovely work of making soil.  One of them is the type that spins, to allow the contents to mix well.  This one has small holes that allows bit of composted material to fall through.  When I let the chickies out of the coop in the evenings, they generally make a run for the compost area, to pick at the fallen tidbits.  I kind of think of it as dumpster diving for chickens.
Posted by Laurie at 9:20 AM 7 comments: 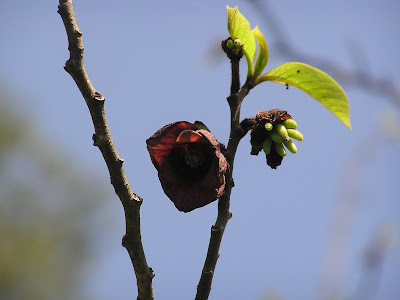 Do you suppose it says something about the state of my hair that a bird landed in it this morning :o)?  A tufted titmouse, to be exact.  Standing on the porch, talking to McNibs, I suddenly felt little bird feed attach themselves to my hair.  I'd been hearing birdsong and birds fluttering about, but that was a surprise. I looked to see if there was any sign of a nest on the porch, but did not see any.  Wonder if it's any indication how the rest of the day will pan out.  Well, at least it will be interesting! 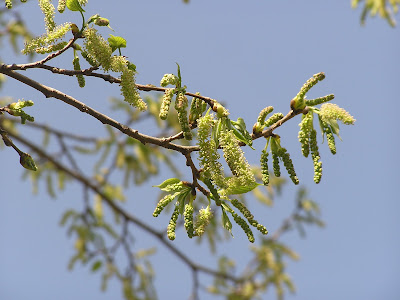 With all the talk from family and on various blogs, I decided to begin the Downton Abbey series on Netflix.  I've watched the first two episodes, and have been pleasantly surprised.  I've even caught J engrossed in it, in between working on his laptop. 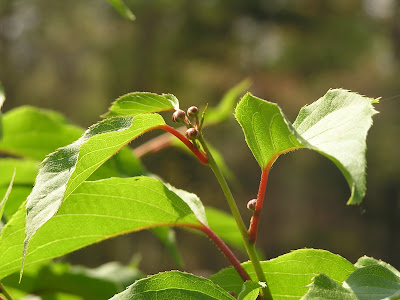 There's quite a prolific variety of fruit developing on the homestead this spring... peaches, pears, pawpaws, apples, mulberries, grapes, and figs so far.  The kiwis even appear to be loaded with their first flower buds.  Unfortunately, I don't see any buds on the male plants, and J says we need both for fruit.  I'm hoping they're just a little late in developing.  If you have any kiwi growing experience, please do share.
Posted by Laurie at 10:58 AM 7 comments: 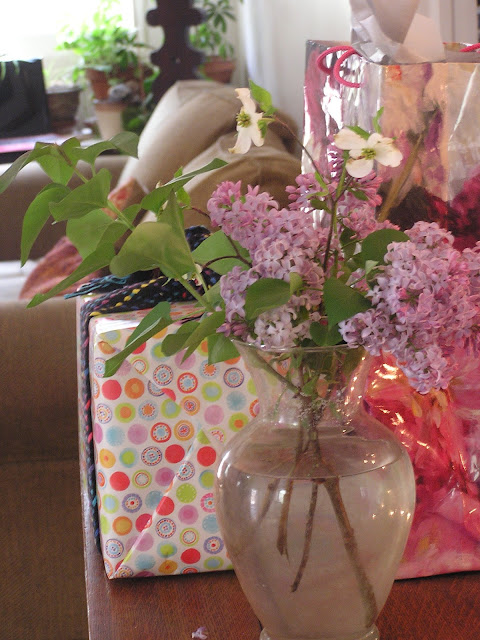 The lilacs are smelling sweet, and looking so pretty next to the path.  Today is Joseph's birthday.  We met my sister and her family for dinner last night.  Today we're having a quiet homestead day, with a present or two, and good things to eat and drink.  Happy April, friends!
Posted by Laurie at 4:33 PM 3 comments: