The Co-op of Seagrove Potters 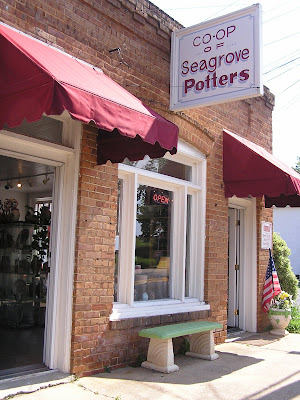 Seagrove, NC has a long history of pottery which goes back several generations.  Today I'd like to share the Co-op of Seagrove Potters, which sells the work of eleven wonderfully different, local potteries. 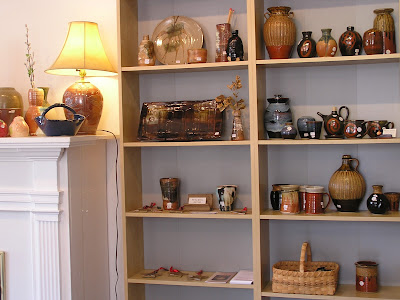 The building in which the co-op is located was the original bank in Seagrove.  In March of 1920, capital stock was raised to open the bank, officers and directors were elected, and the cashier was elected at a salary of $85 per month. 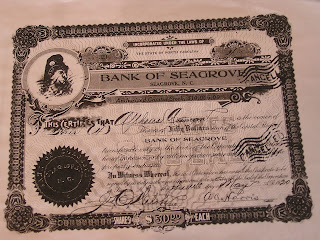 The bank was opened in a small back room of a furniture store, which also housed the Seagrove P.O.  After a year, this brick building was erected on an adjacent lot. 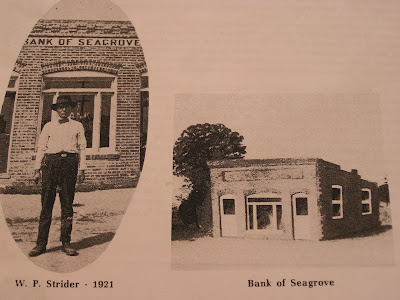 A story is told that the bank was robbed once... almost.  In the summer of 1932, a man walked in and asked for change for a $20 bill.  After getting the change, the cashier looked up and into the barrel of a 38.  Told to raise his hands and back up, he obeyed, backing to and out an open window, and began yelling "get the robber". The startled robber fled in a getaway car, throwing tacks in the road to stop the sheriff who was in hot pursuit. The original bank vault is now a storage room for the co-op. 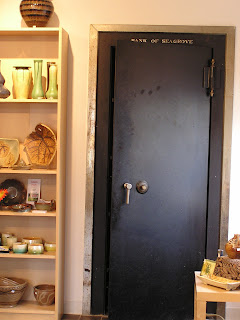 In Dec. of 1933, during the Great Depression, the directors met and decided it was in the best interest of all to liquidate the bank. 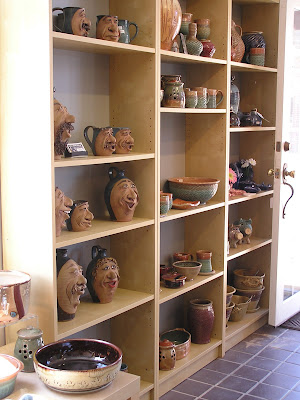 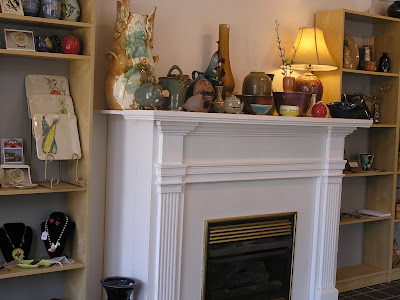 This wonderfully historic space lives on as a beautiful pottery gallery.  It's a fantastic place to work and visit. 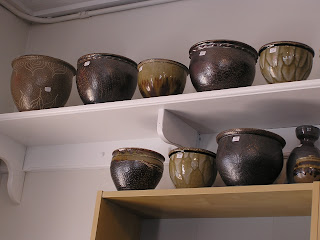 Lest you got the impression from the previous post that the kindness between Meredith and I only goes one way, let me assure you that is not the case.  She and her husband Mark are members of the co-op.  I fill in  there thanks to her, and work in various capacities at their pottery.  My soap made a large leap, from un-named and unwrapped to what it is now, due to her very helpful suggestions.  For a time, she arranged a monthly massage day out of her home.  All I had to do was show up for the appointments she had scheduled.  Her encouragement of my many endeavors has been huge, and the work she has sent my way since I retired from nursing has literally made the difference in paying my bills on more than one occasion.  She is a dear soul, a good friend and a very talented potter.  If you're in central NC, drop on by the Co-op to see her work, along with the many other talented folks who have their work here. 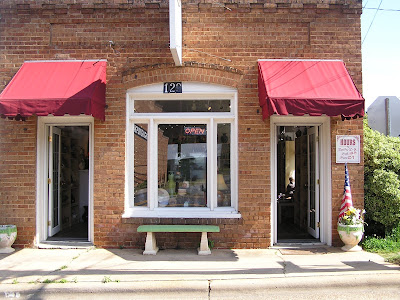 A Story of Quilt Squares 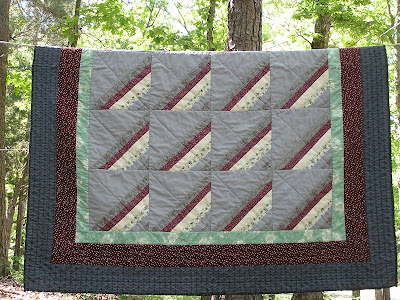 There have been two projects finished in the past week.  I'd like to share the first with you today.  A couple of years ago, my friend Meredith gave me some quilt squares that her sister Lee had begun, along with a long, cotton dress Lee had worn in her younger days.  When she said she thought I could do something with the squares, my only thought was to finish the quilt that Lee had begun.  By this point, cancer had taken Lee from this world.  Meredith and Lee were close, and if it were me, I'd want to wrap myself up in some of my sister's love again.  Never mind that I'd only been sewing a couple of years and had never made a quilt.  What I had on my side was a kind and generous quilter who agreed to help me make it happen, my Dad's wife, Lois.  I never would have attempted it without her support and guidance.  She encouraged me every step of the way, endured and fed me quite a few days and allowed me to use her sewing machine (a super duper machine made for quilting, compared to my secondhand  Singer), and was always patient when I called with questions on my "homework". 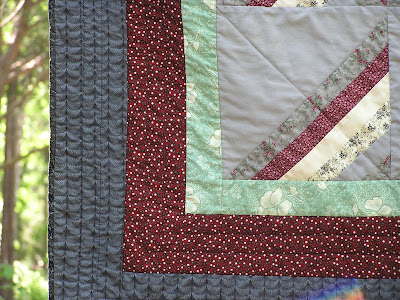 Do you see that band of green and white fabric?  That was Lee's dress.  With Lois' quilters eye, she picked up on the green in the band of fabric next to the plain gray (you'll need to click on the photo to enlarge it to see the green, I believe).  I'd never noticed the green, but wanted to see if I could lighten up the colors.  Lois sent me a computer-generated model of her suggestions, and there was a green fabric that was just about a spitting image of the dress fabric, though she knew nothing about the dress at this time.  Lee was tall, and it was a long dress, so there was a good amount of fabric.  When I brought it for Lois to see on my next road trip to Eden (yes, they actually live in Eden), she said it should work, so I went about deconstructing the dress. 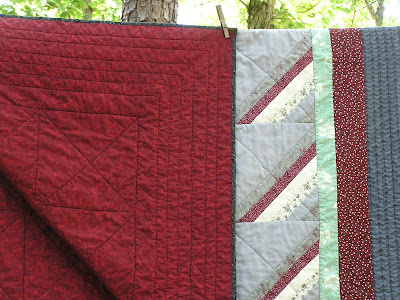 It's not perfect, but I finished the quilt, and was happy to be able to give Meredith a little bit of her sister back last week.  Meredith wrote about it here.  Wishing you the loveliest of weeks! 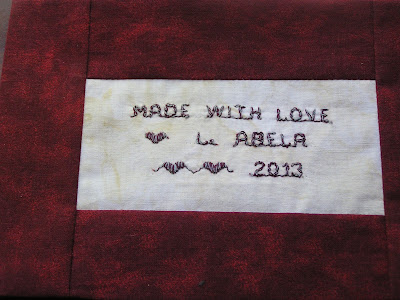 Small B and B and Cafe 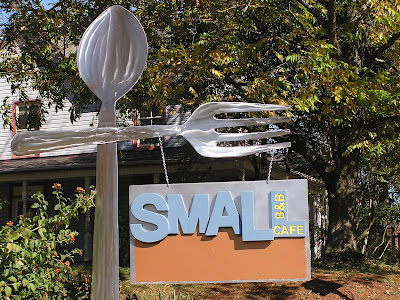 Today I want to tell you about a wonderful local spot, Small B&B and Cafe.  Dave and Lisa moved to Pittsboro from Minneapolis, where they had a seasonal, local, organic eatery for several years.  They also found time to be regulars at the farmer's market there. 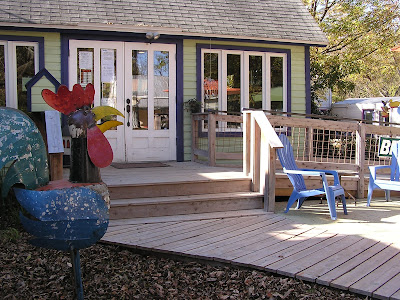 Their energy and enthusiasm hasn't waned any since their move to NC.  They opened their cafe in late 2011, and the B&B followed in 2012. 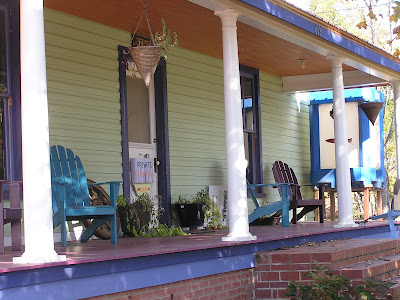 The B&B has two small units, with incredible woodwork by a local artist.  The first unit includes a tree which climbs up the wall. 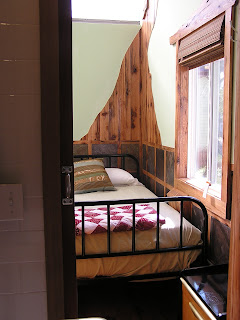 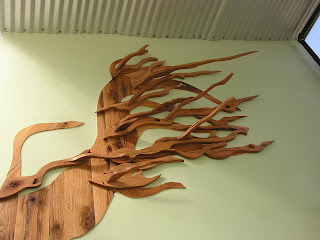 The second includes a sun and moon on the door to the bathroom. 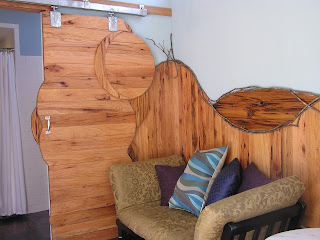 The third unit is a large, separate suite which includes a kitchenette and living area. 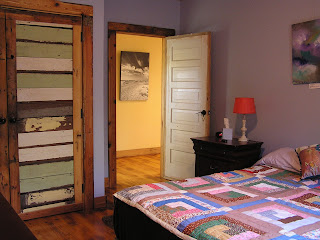 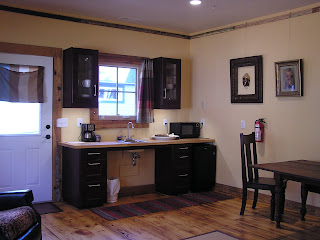 These folks are passionate about supporting local businesses.  When you enjoy a meal at the cafe, you're eating a meal that at a minimum is 60% locally sourced.  Local art abounds on the grounds.  New Earth Fabricators played a part in their rainwater collection system.  In their guest rooms, they use Abela Soaps created just for them.  They're only a couple of blocks from downtown Pittsboro, with antique and thrift stores, a tap room and more.  They're pet-friendly, and are within an hours drive of Raleigh, Chapel Hill, Pinehurst and the NC Zoo.  If you're planning a visit to central NC, Small B&B and Cafe is a great spot to relax, eat well and have fun.

Labels: B and B soaps, custom Abela Soaps, New Earth Fabricators, Small B and B and Cafe 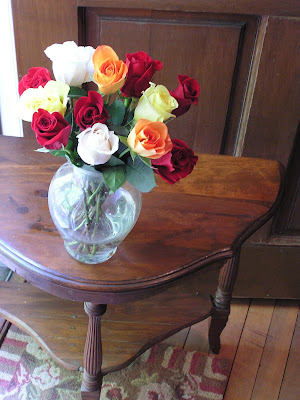 Wishing Moms of all sorts a very happy Mother's Day!
Posted by Laurie at 7:40 AM 2 comments: 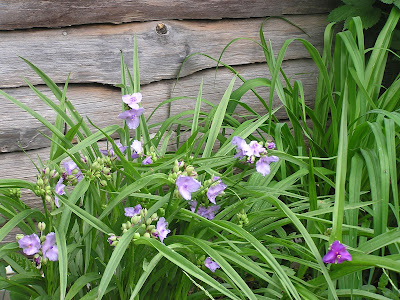 I'm sorry I have not stopped by here lately.  It's been a whirlwind of a spring, with a show, new product development, soap making, gardening, a homestead building project and more.  Some chicks have recently been given to us.  Last weekend, Joseph's son and family found a chick in the Burger King parking lot(!), which they rescued and brought to us.  Then, on Monday, a friend gave us 4 chicks.  The mama hen is a breed that is a good sitter, though it escapes me at the moment.  The rooster is a Lakenvelder.  *Mama hen is a Delaware. 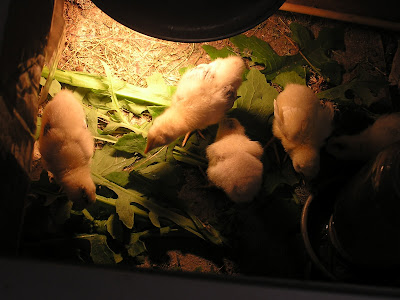 This spring, I've seen birds I've not noticed before.  Last week, I saw some unfamiliar birds building a nest atop the gutter at Hospice, but didn't get a picture. This week, I heard a bird fly into the storm door, and when I went outside, found a white-throated sparrow, which I don't remember seeing before.  According to my book, it appears it was migrating to Canada for the warmer months.  I sat with it to keep it safe from the farm cats until it got it's bearings and flew off.  I thought she was lovely. 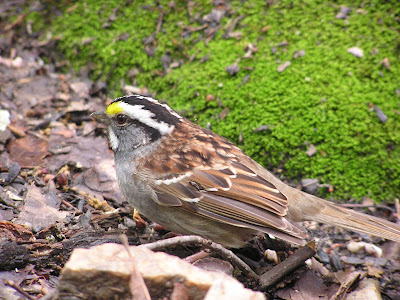 It's been a cool, damp spring here.  Even so, there are many flowers bursting forth...  iris, clematis, spiderwort, roses, dogwood, coral honeysuckle to name a few.  The garden plants are hanging in there, but I wouldn't say they're thriving.  I'm sure warmer weather will arrive soon. 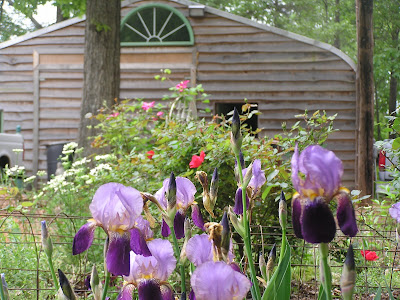 I hope you're enjoying whatever is filling your days!