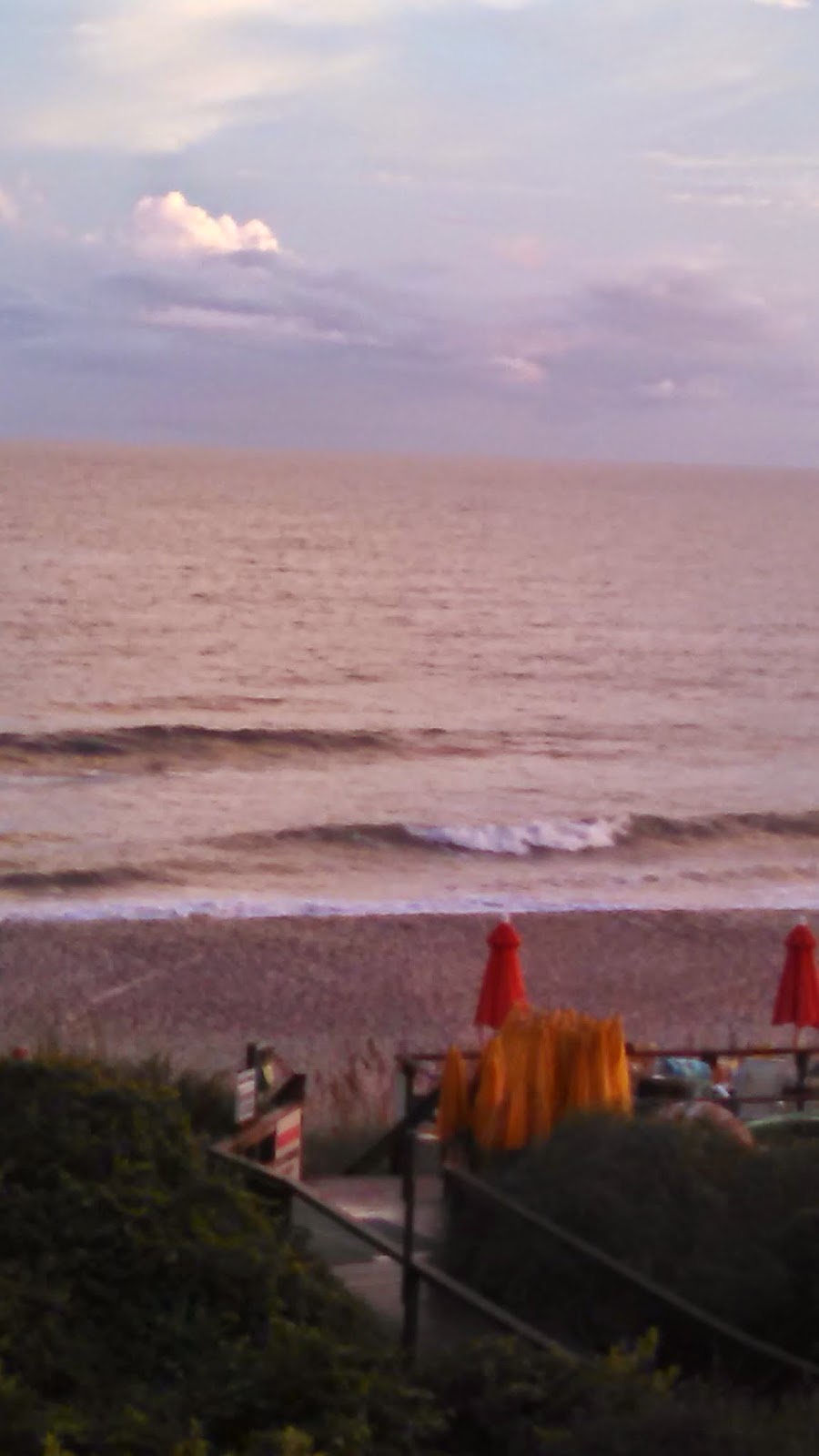 Joining in with Brandy with this week's Frugal Accomplishments:

dried laundry on the line 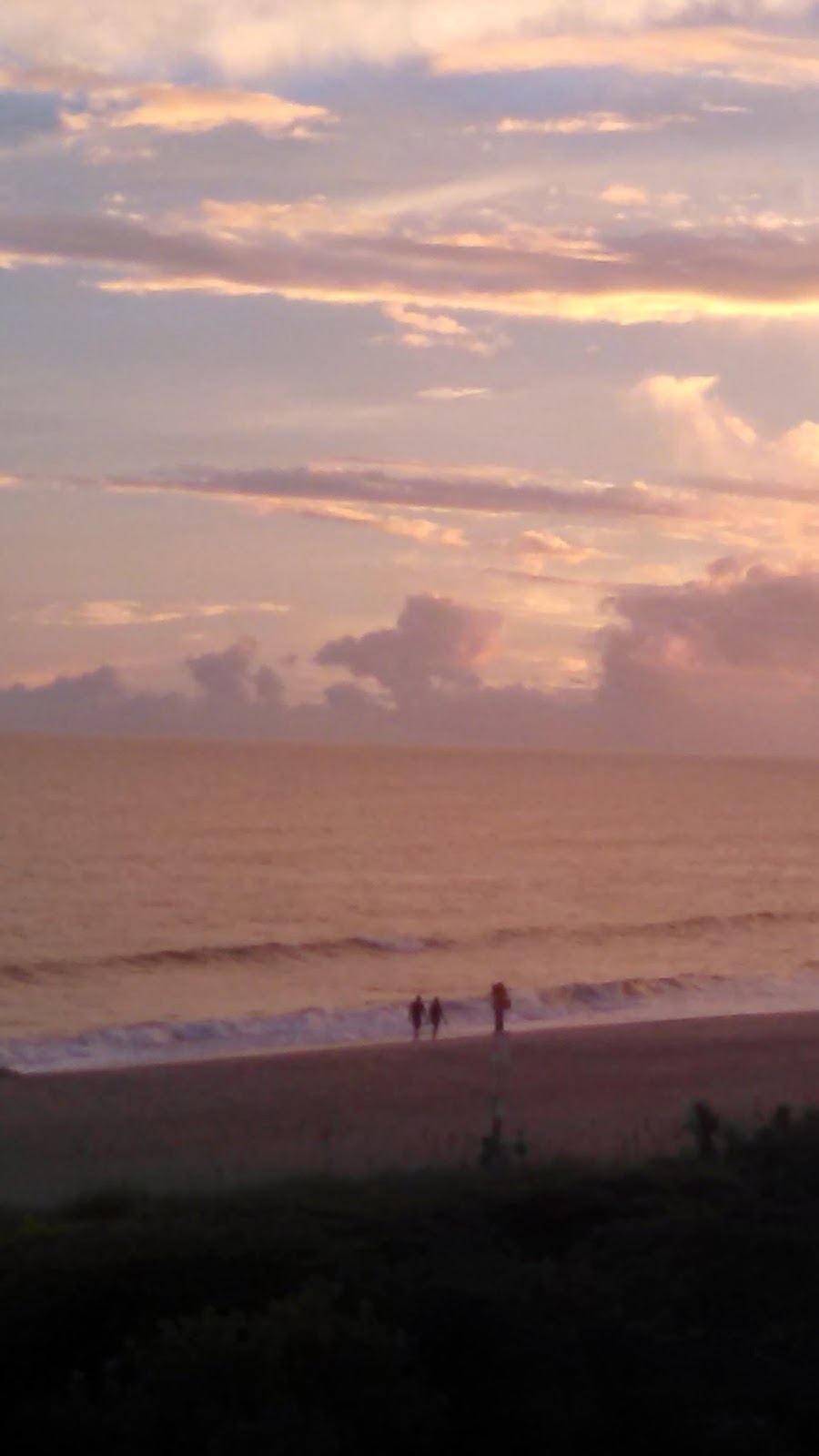 As you can see from the photos, we took a few days vacation at the coast last week.  Though there were a couple of lovely dinner's out, we also had some frugal moments.  On our drive to the coast, I spied a discount grocery store, which we stopped at on our way home.  I found several good deals, including Maranatha organic peanut butter for 2.29 (reg. 7.29 - I bought 8),  a 14# bag of Evolve grain-free dogfood (reg. 24.99) for 6.99, and Annie's organic mac & cheese for .69 (reg. 3.50).  All of the above expired sometime in 2015, so nothing out of date.  Too bad they're several hours from us.  We do have a couple of new discount grocery stores in Asheboro.  I've been to one a few times, and plan to visit the other soon.

My list will probably be a little short this coming week as well, as I will be getting ready for a show.  I have 6 dozen bars of soap to wrap, along with other preparations.  I saw mention of a maple latte online, and have been enjoying them this weekend, homemade of course.  It seems just right for the early days of fall.... yum!

saved vegi trimmings and some large okra for broth

while cleaning edges of soap for an order for a local B&B, I saved the tiny slivers in a mason jar, to be made into liquid soap or soap paste for home laundry use

harvested tomatoes, okra, basil and pears from the garden 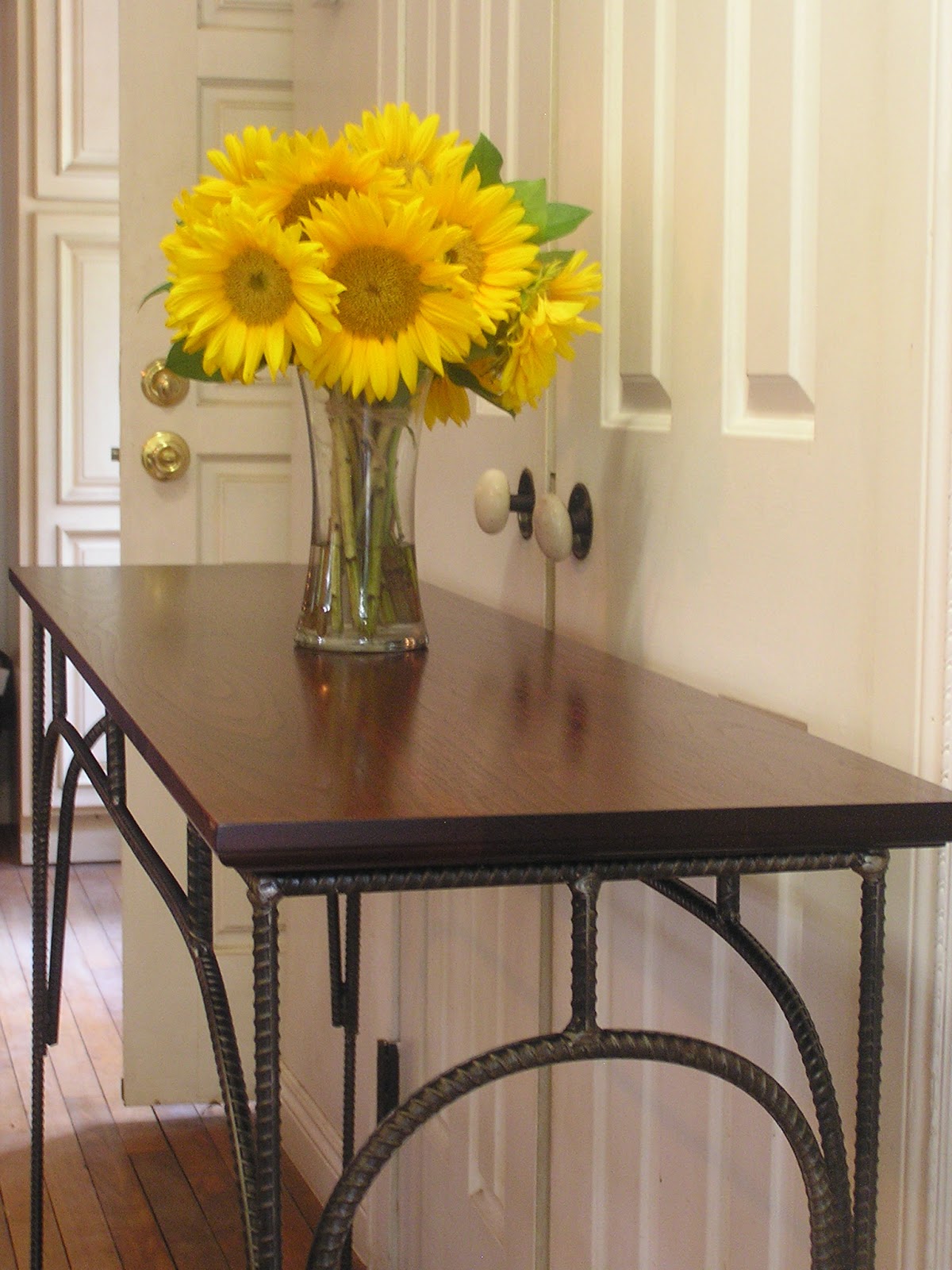 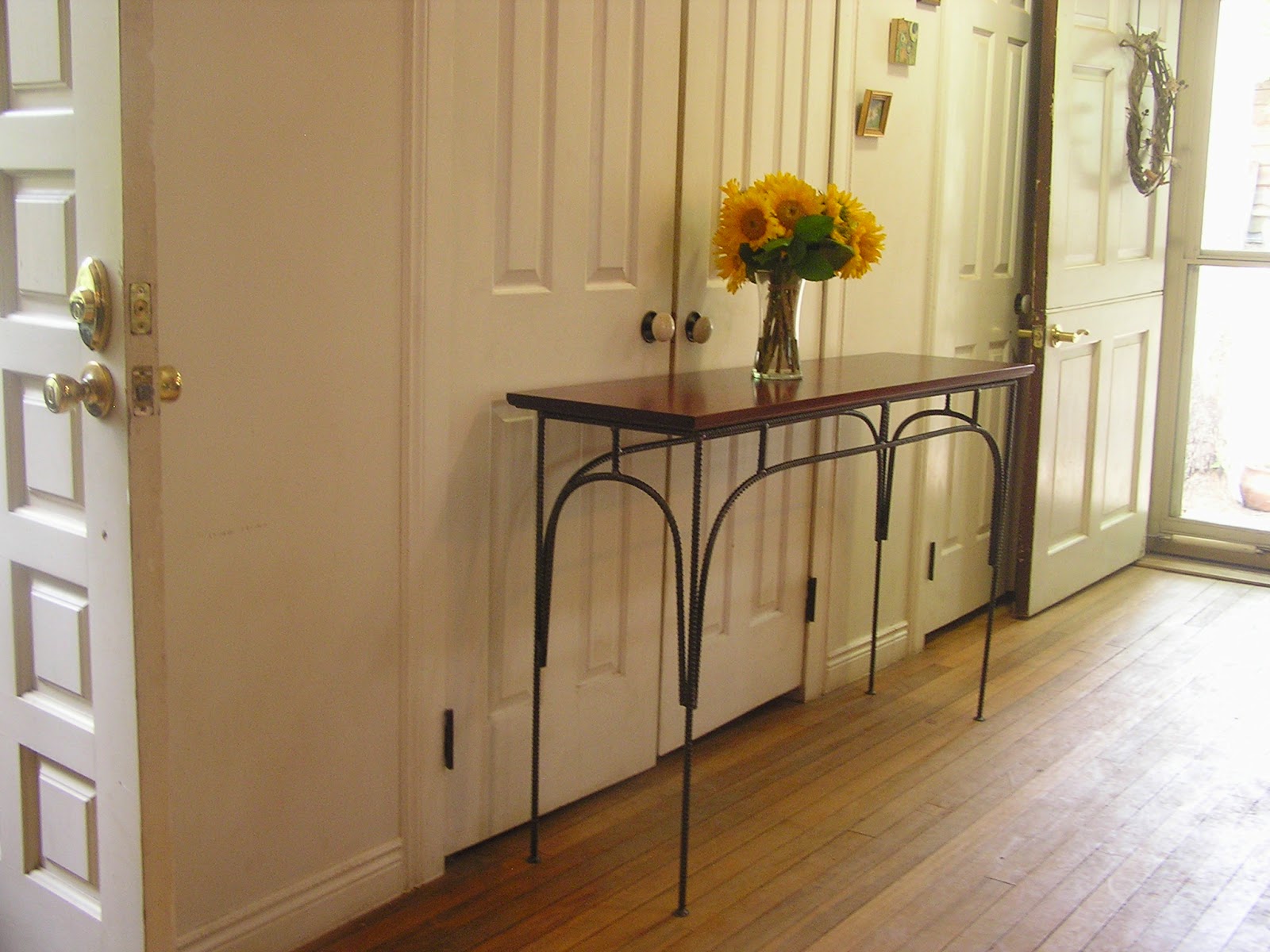 The sofa table is our most recent custom order from my etsy SoulSeeds shop.  This one shipped today, and is on its way to Wisconsin.  I have been inspired by The Prudent Homemaker blog, and the comments that are written.  So, this week I'm joining in with her usual Monday post.  Her blog is one of those I always find a treat to visit.  I hope it inspires you too!

Doing laundry with homemade detergent and hanging it on the line

Freezing corn & peppers from the garden, patty pan squash from a neighbor, and lambs quarter, which grows wild here

Making a pie with pumpkin from the garden, using eggs from our chickens

Buying a new "second" T-shirt for J for $1 at a thrift shop, much needed as a work shirt

Planting a free parsley plant from my Mom's

Harvesting and eating squash, tomato, potatoes, basil, rosemary and garlic from the garden

Harvesting pears and apples, which I plan to sauce

Harvesting red raspberries, eggplant and chard from the garden

Borrowing books and movies from the library

Canning a large batch of  broth from vegetable trimmings, which I save in the freezer

Harvesting sweet potatoes and sunflowers from the garden

Tried signing up for Pinecone Research, though they were not accepting my demographics at present

Had the A/C off most days and nights

Harvesting rainwater, and watering plants with the dehumidifier condensation 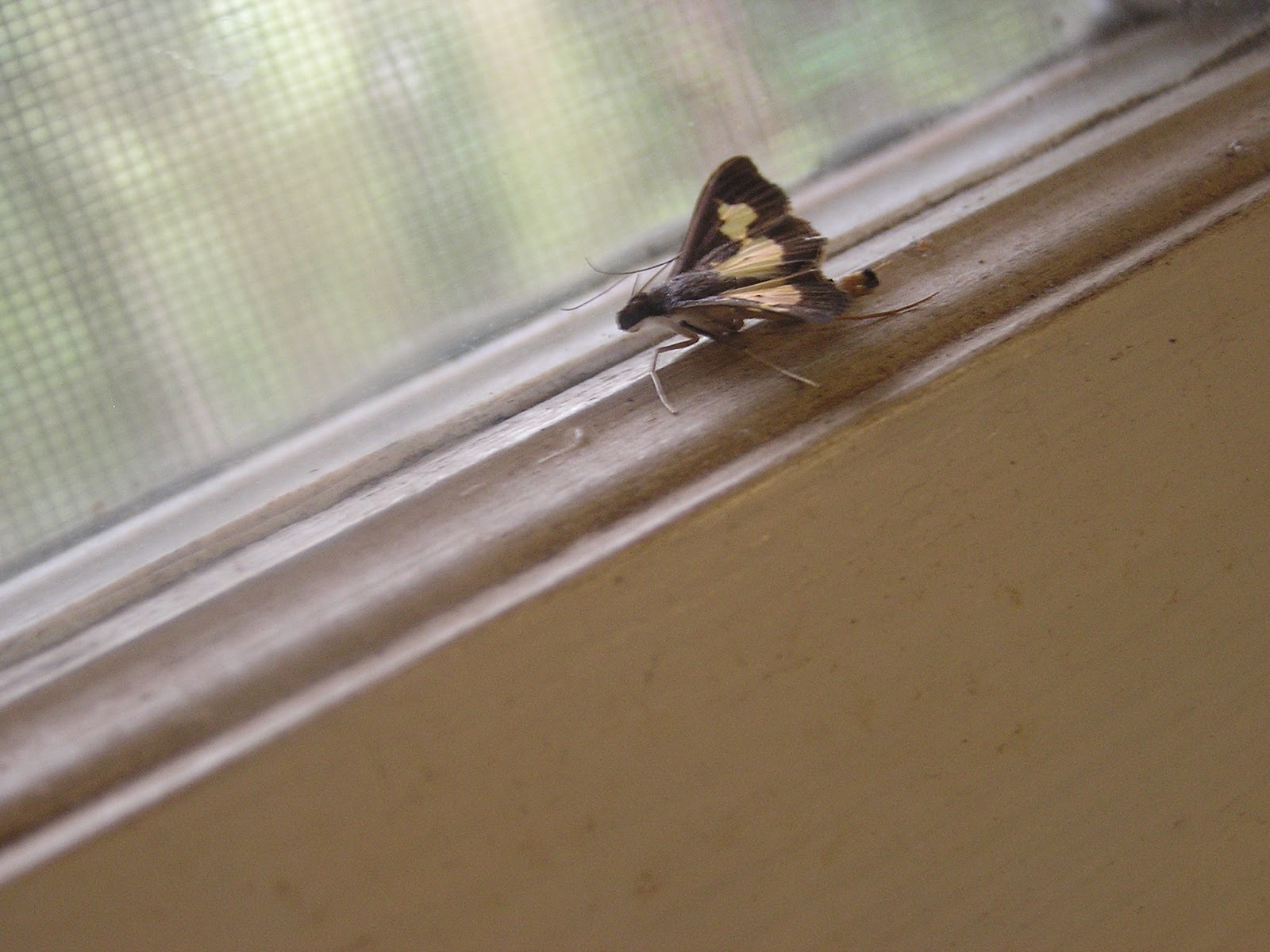 Hello, friends!  There have been a lot of gardening related activities going on around the homestead.  Sweet potatoes have been dug, and are drying.  We got several football-sized ones in this year's batch.  The ants had found some of them, so it's good we dug them when we did.  I cooked up some that had gotten cut up during harvesting, and the dogs enjoyed them last night.  It takes a month or so for the sugars to change, and make them nice and sweet, so we'll wait a bit to enjoy them. 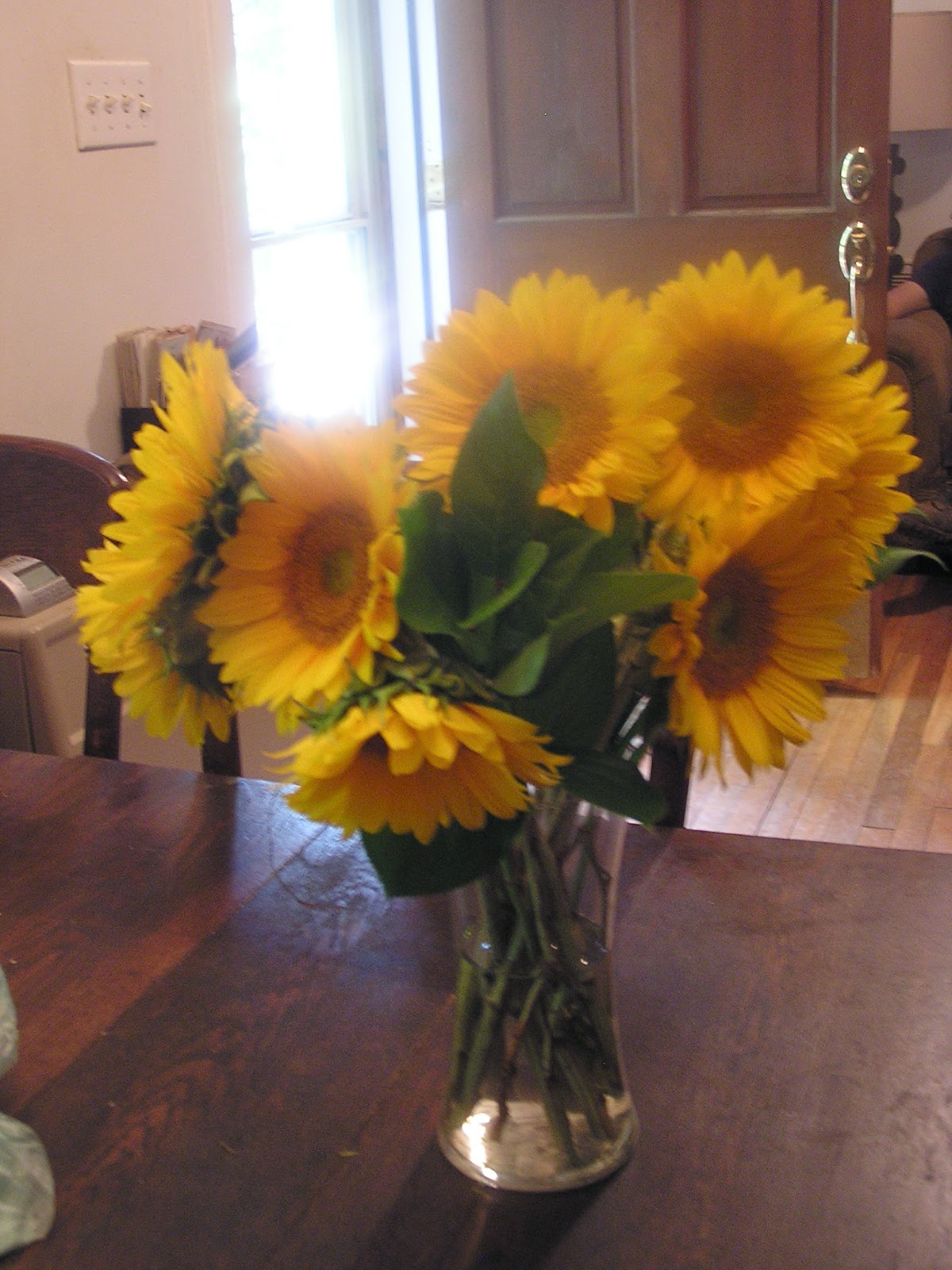 The sunflowers on my table were a birthday surprise.  Sunflowers are one of the most cheerful flowers, don't you think?  J harvested sunflowers in our garden, and the heads are drying for winter use for us and the birds.  Some of the heads that had fallen over and were being eaten by the wildlife went to the chickens.  They didn't seem terribly interested, until I began removing the seeds from the heads, then you can bet they were pretty excited.

I tried something new with the okra this year. We're growing both red and green varieties.  The green okra grows so tall that I can no longer reach it.  For the past 2 or 3 weeks, I was bending over the stalks to get to the okra, but they were getting too tall for even this, plus it was really making my neck sore, straining upward for many minutes each day.  I decided I'd try pruning them this weekend.  Quite a few plants had side shoots with buds already, so I'm sure they'll be fine.  We'll see how the others fare.  We are getting some much needed rain today, which ought to encourage them to grow.

A neighbor gifted us with a large amount of patty pan squashes.  Unfortunately, many were wormy, and many were picked too large, having big, tough seeds.  Not being one to waste food, I did manage to cut nice rounds out of the top portions, which have no seeds, for freezing.  The sides were cut away and put in the vegetable broth bag I keep in my freezer, adding to it until there's enough to make a nice batch of broth.  The middle pieces with all the big seeds went to the chickens, and other bits went to the compost. 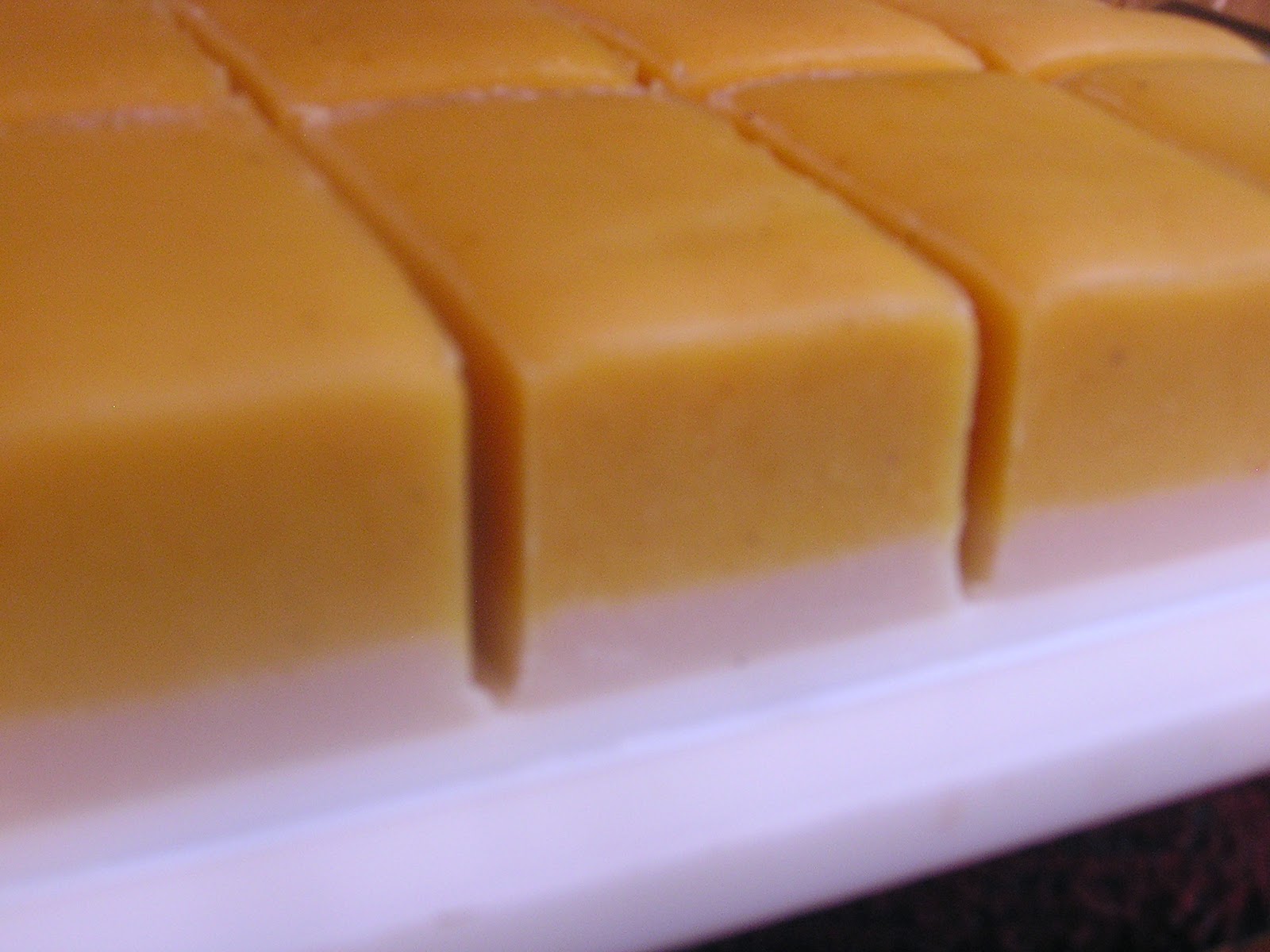 We tried the second grilled peach recipe I had been wanting to try this weekend.  I bought big, beautiful, organic peaches, but unfortunately they didn't have much taste.  I'd like to try the recipe again with some really good peaches, and see what that's like.  We thought they were decent, but not wonderful.  Here's what I did:

Cut peaches in halves, remove the pit, and place on foil cut side up

Drizzle with honey, then balsamic vinegar

The original recipe is on Pinterest.  If you'll click on my Pinterest link in the sidebar, and go to my Yummy Eats board, you'll find it there.  The two things I did differently were using Cambozola rather than Gorgonzola, because it needed to be used.  And, the recipe called for grilling the peaches cut side down, then turning over and filling with cheese and drizzling while on the grill.  J felt this was pretty much guaranteed to be an ugly mess, and I had to agree, so our peaches stayed upright the entire time, were put on foil, and I added all the ingredients before grilling.

Hum Along, so you Don't Get Bored 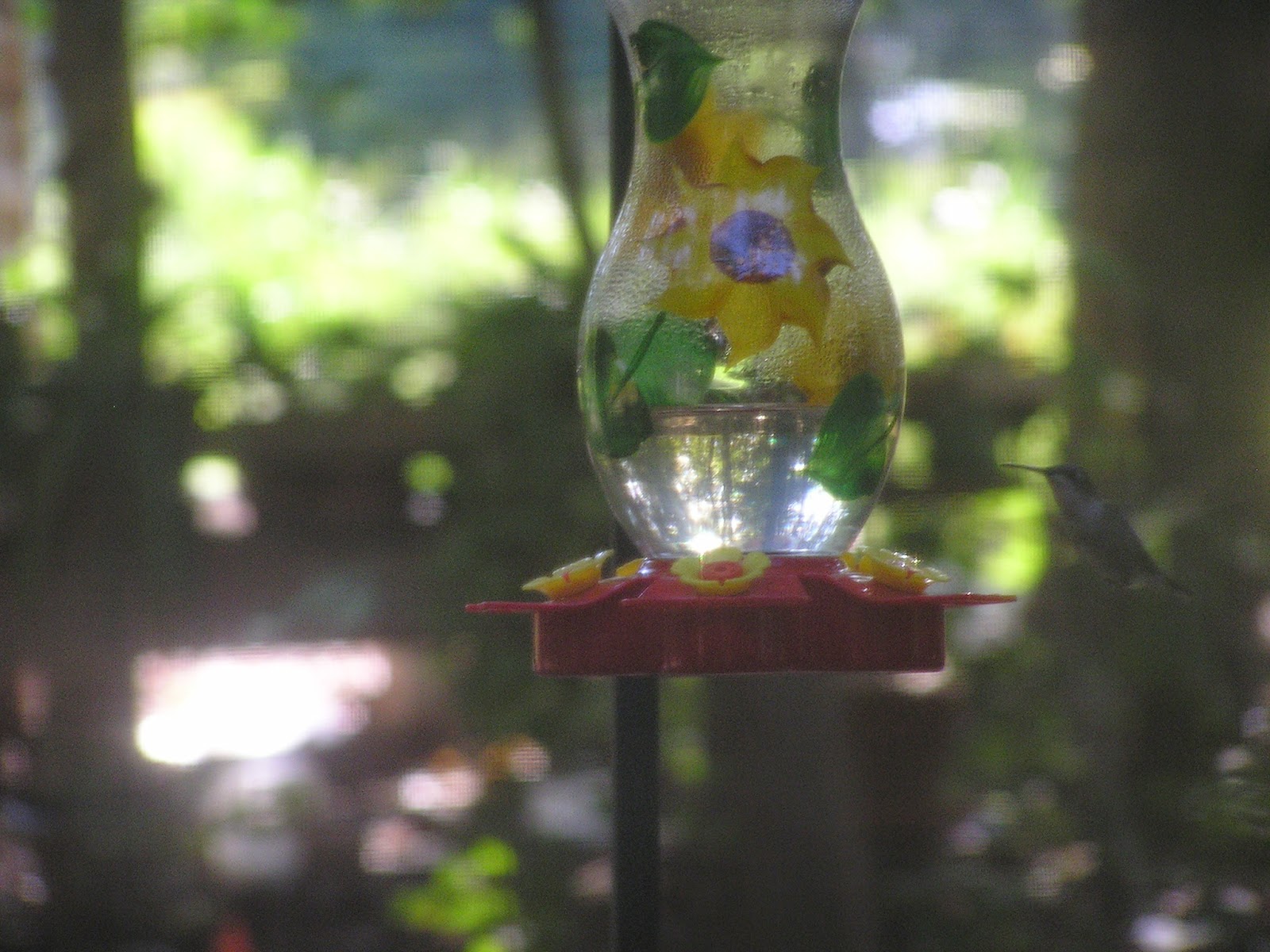 I trust everyone had a nice Labor Day weekend.  On Sunday, my sister had the family for dinner, and it was lovely. She gifted me with the handpainted hummingbird feeder above.  I did try to get a better photo, but either the hummers didn't come around, or they drank from the opposite side of the feeder, so this one taken through the window will have to do.  Can you see the hummer just to the right of the feeder? 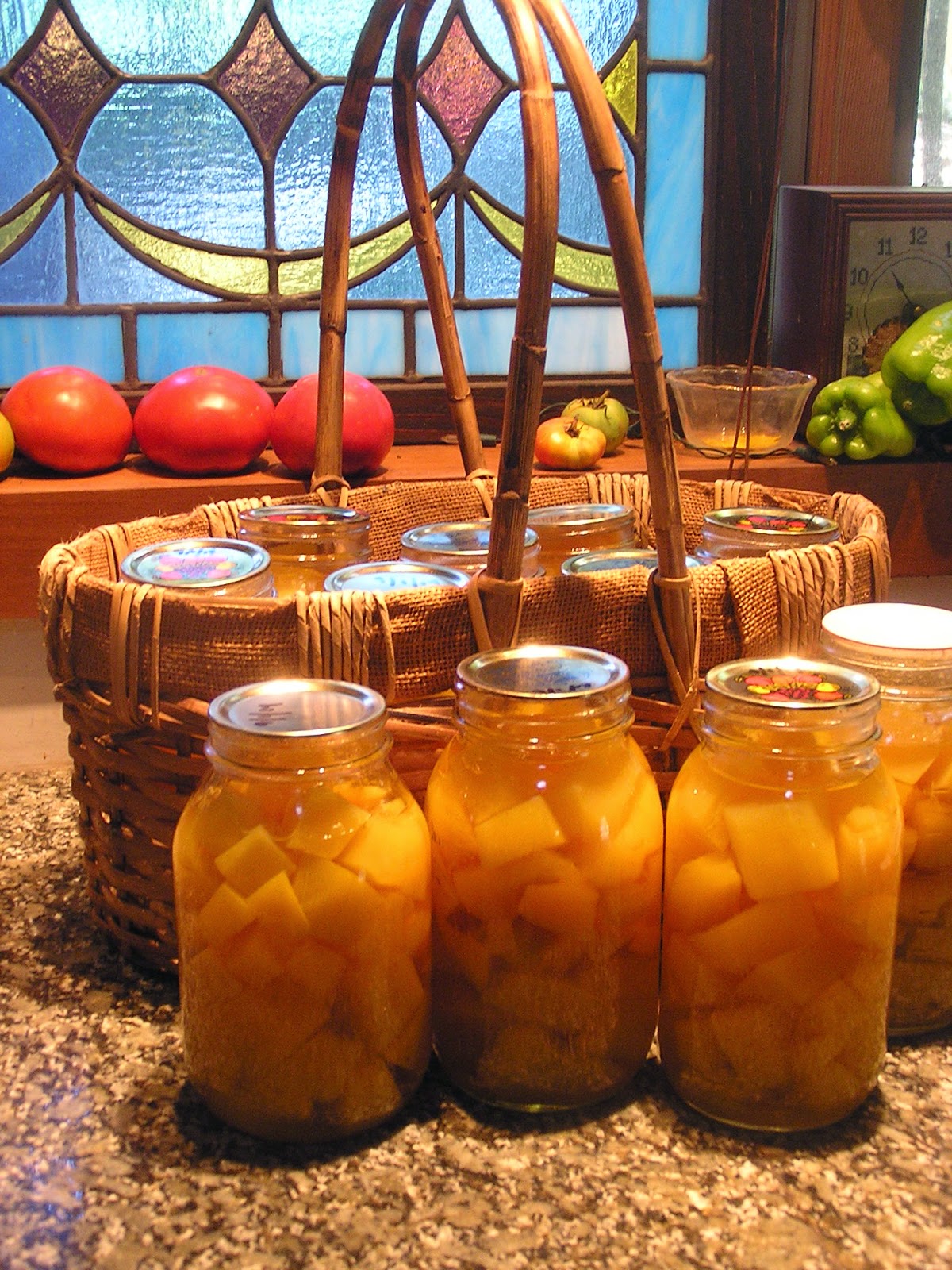 I canned pumpkin and winter squash yesterday.  Quite a few were picked early due to dying vines or borers. The squash with borers wouldn't keep, so had to be canned.  We'll have to do a better job next year, covering them with row cover to keep the moth away from our squash.  They seem to be more of a problem every year, bothering our cucumbers, summer squash and now winter squash and canteloupes.  The chickens are getting all the worms and ruined melons, and the compost gets all the cut away bits and skin, so nothing is wasted.  Dog baths and soapmaking are on my to do list.  What's on your to do list this week?
Posted by Laurie at 11:20 AM 2 comments: