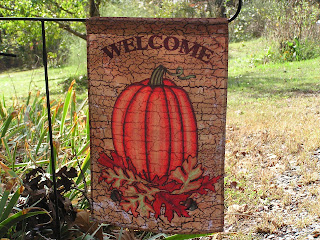 The chickens have been quite prolific lately. So much so, that I'm working on a fifth egg carton. Which calls for some drastic measures, in terms of egg eating. J and crew have been dismantling his shop building this weekend, and making great progress. So, breakfast for M & I was a puff pancake recipe from King Arthur Flour, which used 6 eggs. Yay!
The Newcastle Inn Baked Pancakes
3 eggs
1/2 cup milk
1/2 cup King Arthur Unbleached All-Purpose Flour
a pinch of salt
2 tbs unsalted butter, melted
Preheat oven to 450. Whisk eggs with milk until well blended & light. Add flour and salt & whisk until they're well incorporated. Blend in melted butter & continue whisking until batter is smooth.
Pour batter into two lightly greased, 6 in cake pans (pie pans work fine too). Bake for 15 mins. Turn out onto a plate as soon as they're done. Sprinkle with lemon juice & serve with maple syrup. The recipe says this is 2 servings, but I double it, so that we each get 2 pancakes. Try it, for a great, easy breakfast.
I'm thinking I'll make a poundcake this afternoon, to use up another 6 eggs. I'd better take a walk today, and burn up some of these calories! I'm wishing you the loveliest of Halloweens!
Posted by Laurie at 12:21 PM 1 comment: 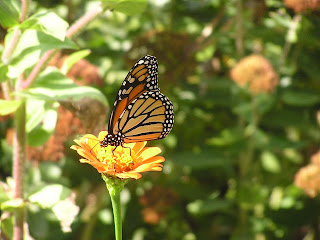 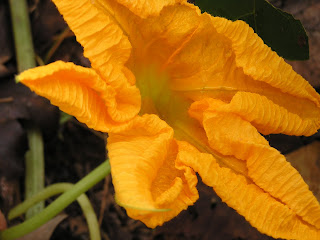 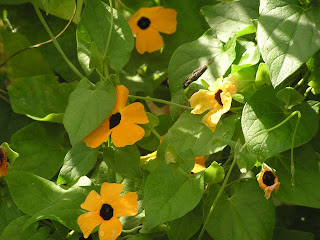 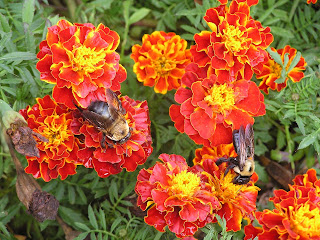 There has been lots of orange in the scenery around here, not only from the usual pumpkins and fall leaves, but from the still blooming flowers and butterflies. I thought I would share some of that vibrant color with you today. Happy Friday, friends!
Posted by Laurie at 9:07 PM 1 comment: 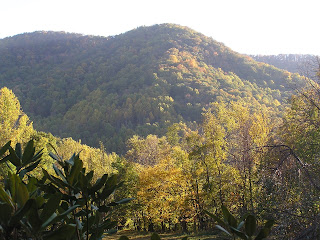 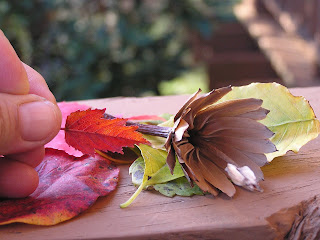 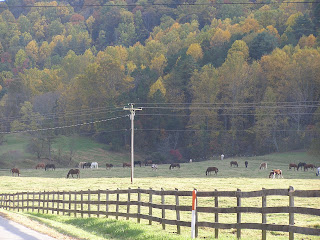 The mountains were beautiful. I had a grand time with Teresa, and in class. While I had some long days in class, the scenery, good food and good people made the trip enjoyable. The first photo was the view from our room. On one of the days, T brought back a bounty of antioxidant goodness from The Chocolate Fetish to share. If the toffee, and the dried cherry and walnut round are any indication, I'm almost scared to try any of the truffles. The Center was lovely, with a wonderful innkeeper, excellent food, enjoyable guests and a nightly fire in the great room. We had the best intentions to enjoy the hot tub and sauna, but ran out of time.

The second delivery of concrete arrived early this morning, which finishes the pad for the shop. I manned one end of the screed board again, and Joseph is finishing up the trowel work. There has not yet been anything other than a light frost, here and in the mountains, so there are still perennials blooming, along with the changing leaves. I'm enjoying all the color, while it lasts.
Posted by Laurie at 12:04 PM 1 comment: 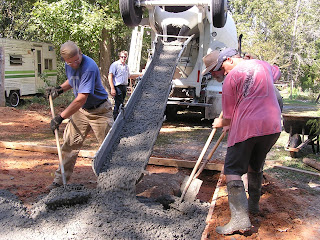 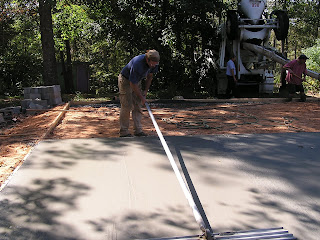 Progress is being made on several fronts. They're all good, but it's especially exciting to see the fabrication shop taking form. Yesterday, the first concrete pad and both footings were poured. I acquired a new skill during the process, that of manning (or should that be womanning :o) the screed. Next week, we'll get the remainder of the concrete delivered, and finish that piece. Next will be the moving of the building. We're dismantling a large metal building, moving it and setting it up here.
Tomorrow, I'm headed to Asheville, for some massage training. I chose this class after the class in Virginia Beach was canceled. It will make for some long days, but I'm taking a extra day to head back, stopping in Black Mountain along the way. The autumn leaves should be lovely, and the colors may even be peaking. I hope to get some good pictures to share with you.
Posted by Laurie at 9:18 PM 2 comments:

Sprouts and a Show 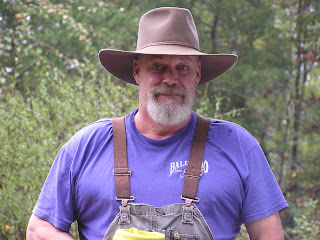 I've just come in from checking the winter garden. Yesterday's rain has encouraged sprouting of the greens, so it's coming along nicely. My good friend M is visiting. He and I go back many years. J & I are enjoying having him here, and catching up. I've been getting ready for a show this week. I'll be taking part in the Caldwell-Hohl kiln opening this weekend. The forecast promises a lovely, sunny fall weekend. If you're anywhere near Seagrove, come on by. I will be leaving at 2 tomorrow to attend a dear friend's memorial service, so come earlier if you're coming for my offerings. I'm playing Sunday by ear, and will stay as long as there's enough attendance. Happy Friday, friends!
Posted by Laurie at 11:18 AM 1 comment: 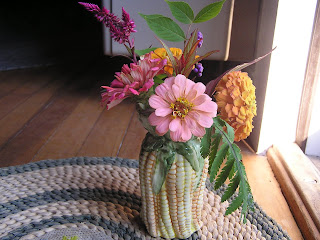 This year has been an interesting one. Usually this week, we're getting our first frost. Instead, we're eating fresh-picked summer squash and watermelon from the garden. I'm not complaining, mind you. Just noticing. I'm awaiting the arrival of a dumptruck, which is delivering a load of dirt for the fabrication shop this morning. I tried a new recipe last night, for watermelon salad. It was different, but pretty good. It's something I wouldn't want everyday, but would eat again. J said he felt the same. The recipe came from Country Living magazine.

Divide watermelon among 4 plates. Crumble blue cheese on top and drizzle with olive oil. Season generously with salt and pepper and serve.

I should say I followed the feel of the recipe, rather than the exact recipe. Our watermelon wasn't seedless, but I tried to remove most of the seeds. I used Gorgonzola Dolce for the cheese, a milder, sweeter blue cheese. I didn't weigh or count the watermelon cubes. If you'd like a little something different, give it a try.
Posted by Laurie at 11:07 AM 1 comment: 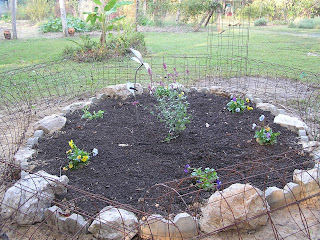 In case you're wondering, yes those are tomato cages all around the flower bed. To keep the chickens out. While creating the bed, we'd totally forgotten how the chickens had decided pansies were a delectable treat last year, and how much of a chicken magnet that loamy soil would be. Thankfully, Joseph's memory kicked in before we let the chickens out, so we headed that one off at the pass. We'll definitely be putting something more aesthetically pleasing around the bed, but for now, we're happy to have pansies.
Posted by Laurie at 11:04 AM No comments: 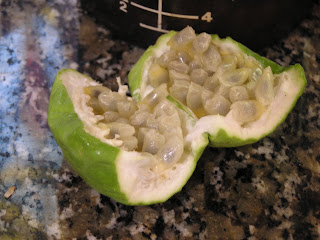 These lovely fall days are making me happy! It's a pleasure to work indoors or out. Yesterday, I juiced a large batch of passionfruit, also known as maypops in these parts. I've been freezing the juice, with the intention of making jelly, once they've all ripened. I've also been cleaning staghorn (red) sumac, basically separating stems and seeds. I'll be making zaater with these. There are many variations of this Middle Eastern spread, but the recipe I learned in a wild plants class years ago is:
5 tbs dried sumac berries (grind them in a nut or coffee grinder & sift to get the remaining, big, inner berries out & discard. Keep remaining powder.)
2 1/2 tbs sesame seeds- toast seeds & grind with a mortar & pestle or a suribachi
3/4 tbs dried thyme
3/4 tsp salt
Mix ingredients together well. Spread out in a small pan and toast in oven/toaster oven for one minute. Store in a jar.
When you're ready to use the zaater, mix some with olive oil to desired consistency, spread on bread and toast if desired. It's great as is, or with cheese and tomatoes.
Sumac also makes a tart beverage, similar to lemonade, which is loaded with Vitamin C. One recipe for this is to soak 1 tbs of berries to 1 cup of water. Sweeten with honey.
Posted by Laurie at 10:38 AM 2 comments:

Sharing of the Intended and Unintended Kind 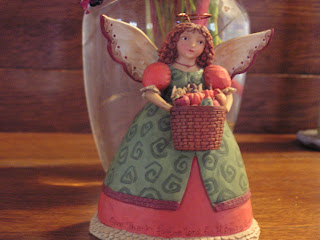 I hope everyone had an enjoyable weekend. Our Mom's and partners came for a visit yesterday. We shared a meal, showed them our latest projects and caught up. The weather was lovely. Poor J woke up with the flu this morning, which I had last week. I'll be doing what I can to get him feeling good as new. With last week's rain, we've been seeing more wildlife... tree frogs, toads, an Eastern Kingsnake. The snake put on a good show of imitating a rattler before slithering back into his hole in the ground. The nights are getting cooler, and we had our first fire in the woodstove last night. I love the smell of woodsmoke. It's a sure sign fall is here.
Posted by Laurie at 8:26 AM 1 comment: