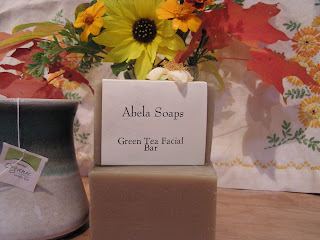 Today, Joseph & I made salsa & pepper jelly. Both of them are hot!! I had been thinking of Sweet Red Pepper jelly, which I recently realized I like when it's put over cream cheese and then on crackers. We needed to do something with all the peppers remaining, and it so happens many of them were hot ones. So, we've got hot instead of sweet this round. In between, I took some photos of my newest soap, Green Tea Facial Bar, and worked on the font for my labels. My marketing friend, Bob, over at EcoBlend, suggested I use a clearer font, one that makes my name more legible. I'm happy with the result.
Posted by Laurie at 6:33 PM No comments: 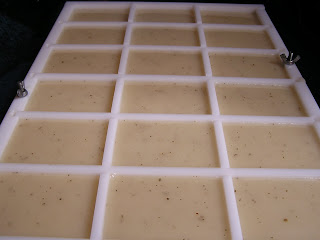 After doing the less than fun housekeeping chores this morning, I got to some fun things. First, I made a batch of Wake Up soap. Next I made cookies. Today was an off again, on again rainy day. Also, Joseph was working today, & the day didn't go as smoothly as he hoped, so I thought he could use a little comfort when he got in. While perusing bloom, a blog I wrote about recently, I found the cookie recipe. They're Grandma Mollie's Oatmeal Raisin Chocolate Chip Cookies. Yum! I took a picture, but it wasn't pretty, so I hope the soap will do.
Posted by Laurie at 8:16 PM 1 comment: 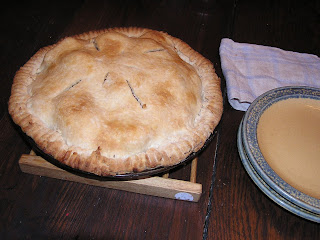 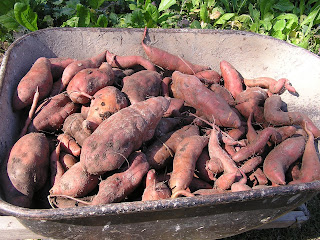 We've had light frosts a couple of nights this week, so it was time to get the last of the tender plants harvested. Before the first frost Sunday night, Joseph pulled all the basil plants. I made many batches of pesto to carry us through the winter. Yesterday, I dug sweet potatoes. We had a wonderful harvest. I do not say this lightly. The past several years, sweet potato harvest has been a bit discouraging. Joseph & I would fork up the ground, only to find that the voles had been blissfully & safely eating all the innards out of almost all of them. I'm a reasonably good sharer, but I wanted more than a meals worth of sweet potatoes. So this year, Joseph outsmarted them. He dug a 2 ft trench, lined it with chicken wire, then built a wooden border for the raised bed, enabling him to add another foot of soil on top of the ground. It worked! It's always fun to see what sizes and shapes of sweet potatoes show up. We had 2 "hosses" that were over 3 lbs a piece. I gave Joseph a standing ovation. Our plan is to rotate the "Irish" potatoes with the sweet potatoes, as he made another potato bed this summer. I harvested eggplant yesterday & made Eggplant Parmigiana, along with an apple pie from our apples. I love eating a meal from food we've grown here. Today, I've made a batch of Kitchen Thyme soap, & have been working on cleaning up some beeswax I got from some potter friends. It's a beautiful day here, with temps in the mid-70's, blue skies and lots of birdsong. I hope it's just as nice where you are.
Posted by Laurie at 1:17 PM 1 comment: 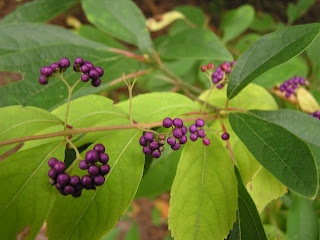 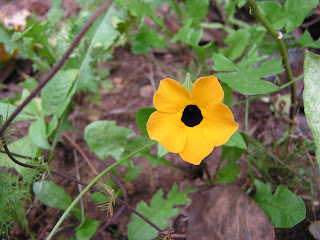 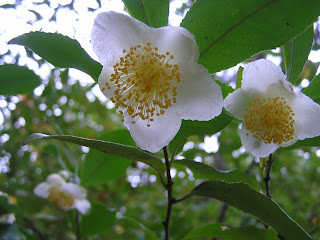 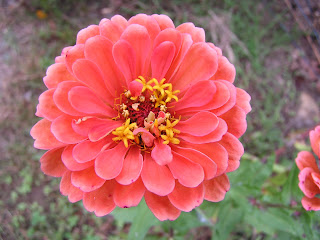 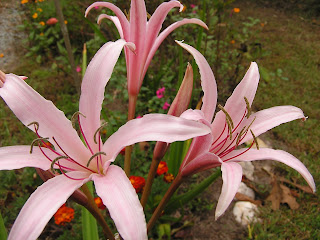 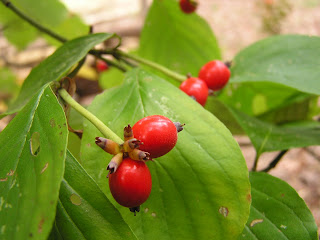 In doing my outdoor chores this morning, I noticed how many things were still blooming, which inspired me to grab the camera. I made my first batch of candles today, some beeswax votives. Hopefully, they'll easily come out of their molds tomorrow. I also made a batch of For the Love of Rose soap, which has the house smelling lovely. All the greens in the garden are looking happy. I'm hoping today's rain will inspire the carrots & herbs I planted to germinate.
Posted by Laurie at 9:53 PM No comments: 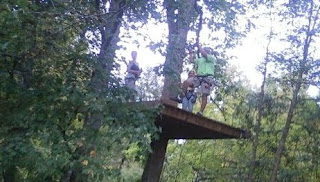 Melissa & I waiting our turn 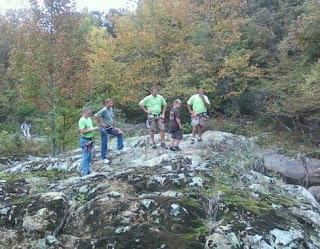 Joseph & the guides on the rocks during a break 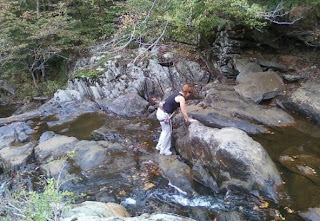 Melissa checks out the rocks 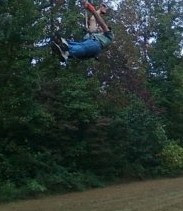 You know those rare days when all things conspire to make it a perfect day? Yesterday was one of those. Joseph made his daughter Melissa & I pancakes, then we headed to the zipline. We met a group of friends there, got harnessed up and went zipping through the woods. We zipped through the tree canopy, over water & some of the massive boulders we're blessed to have here in the Uwharries. Our guides were great, & their humor had us all laughing. The weather was perfect. We had a blast!
Last night we had a gathering of a wonderful community of people at our home. Artists, glass blower, massage therapists, organic farmers, herbalist, yoga instructor, zoo curator, beekeeper, biofuel makers, fire dancer, photographers, musicians. What fun it was to wander from this group to that catching all the conversations. Such an interesting and diverse mix of folks. It was a longterm dream come true. Creating this home took so many years of hard work & focus, it was such a pleasure to share it with this gathering of people. It was a day with an abundance of memories to treasure.
Posted by Laurie at 9:29 AM 1 comment:

Joseph & I are the proud owners of an 1890 steam engine. We are SO excited! Joseph plans to use it as part of a system to generate power. He had to go to Mass. this week to work on a biodiesel plant, & went to look at it on the way home. He bought it from an Amish farmer in upstate NY, who was pleased to sell it to someone who would use it for its intended purpose, rather than scrap it. It was originally used to provide power for a large manor house. It's extremely heavy, & as you can see from the pictures, took quite a bit of finagling to get it off the truck. After all was said & done, I realized Joseph definitely deserved a standing ovation. Off to glean a neighbor farmer's field for corn for our chickens! 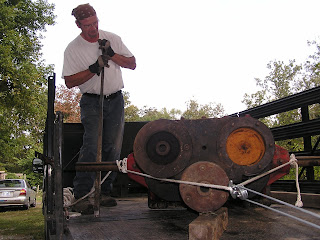 Pondering how to proceed 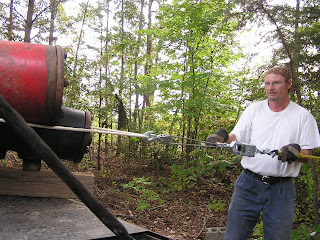 Working with the come-along 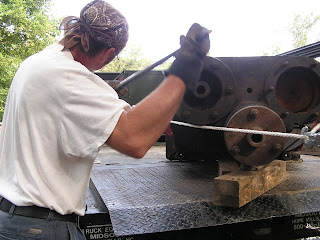 Moving it into position 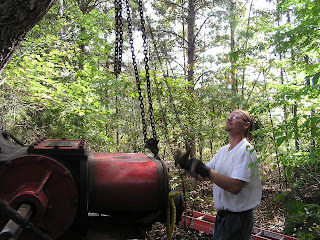 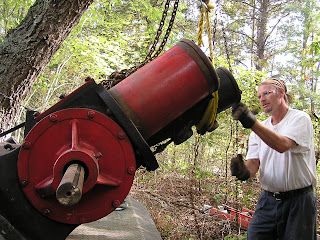 Starting to get it upright 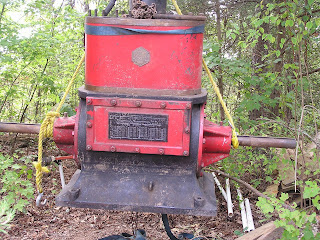 It's off the truck! 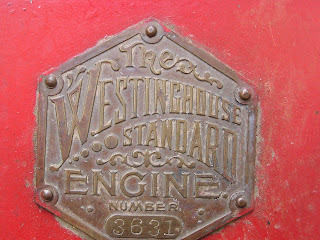 A Westinghouse. Built with pride in America. 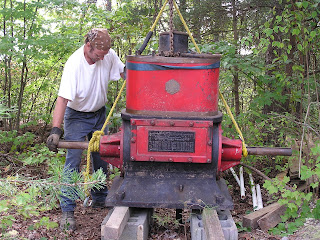 On blocks in its temporary location while we build a generator room.