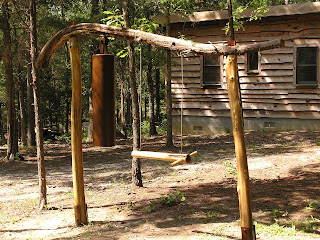 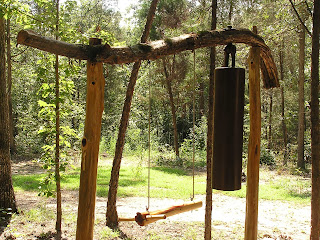 This is Joseph's latest creation. His uncle taught him bell making when he was a young man. The sound reminds me of an old church bell; a wonderful, resonant sound. I've been freezing some of the garden's bounty... sweet pepper, okra and pawpaw. We've had a relaxing Sunday, visiting and having brunch with friends. I hope you've had time to relax a bit and enjoy yours.
Posted by Laurie at 5:10 PM 1 comment: 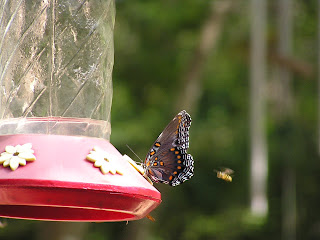 Lots of bees and hornets have fed at the hummingbird feeders this summer, but this week, one brave butterfly fed as the bees divebombed her. Each time they did, she'd frantically wave her wings to fend them off, but kept on feeding. Who needs TV when you've got entertainment right outside your door? Enter my soap giveaway here.
Posted by Laurie at 9:16 AM 3 comments:

Another One of my Friends 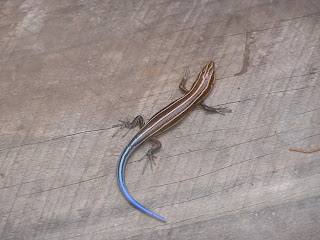 Most of my reading is done at night, which doesn't work very well for anything in which I am trying to learn something. So, I'm ashamed to say it's taken me since May to finish Kari Chapin's The Handmade Marketplace. Well goodness, don't take after me. If you haven't already done so, march yourself over to your nearest bookstore (or her link above) and get this book. I had the pleasure of hearing her talk at Circa Gallery, and she's a very funny lady. She brings lots of crafty wisdom into her book, with tips and tidbits from some very successful women. If you've ever thought about trying to sell your handmade lovelies, or want to increase sales in your etsy shop, I'd highly recommend it. As an aside, I had not been to her blog lately, and was surprised to see myself in several pictures. And what I read there made me research geocaching. Gosh, that sounds like fun! Almost makes me want to get a GPS unit. I received my first international order last night! Go here to enter my soap giveaway.
Posted by Laurie at 10:45 AM 3 comments:

Fellow Travelers on the Path 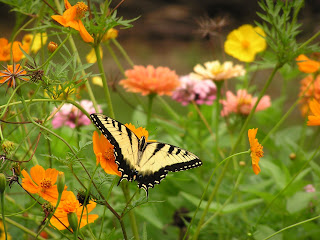 On a walk Saturday evening, I came across a baby rabbit in the middle of the path. Is there anything sweeter than a tiny rabbit, with their big brown eyes? It allowed me to touch it's soft brown fur before scampering off. Then, as I sat on the bench overlooking the hayfield, a hummingbird alighted very close by. I talked to it for some time, so I can only assume it's one that comes to visit my feeders, and is used to my comings and goings there. Have I mentioned before how much I love living here :o)
I spent a good portion of the weekend taking pictures, and stocking the shop with my latest dessert pedestals. I've had a lot of fun finding the treasures that become these, and then finding just the right combination to match up. Happy Monday!
Oh, I had to come back and tell you this! I've been waiting for Susie at Scraps of Life to review my soaps, and today's the day! To check out the review and enter my soap giveaway, go here.
Posted by Laurie at 9:17 AM 6 comments: 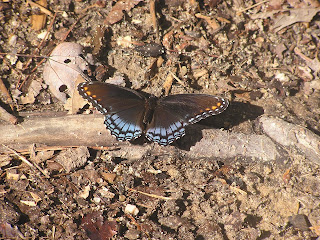 Here's another picture of one of the many Swallowtails that have graced our homestead. I hope you'll indulge me a little while longer in posting butterfly pictures. In the end, I made another batch of elderberry syrup yesterday. I had already turned it into juice, so made the syrup an alternate way I'd read about. I brought the juice close to boiling, then added in some cinnamon basil honey I'd created a few summers back. The ratio was approximately 2 3/4c juice to 3 1/2c honey. Once the honey dissolved, I took it off the heat and added 1 1/2c alcohol (finished my brandy & topped it off with vodka). When cool, I poured it into brown glass bottles I had boiled for 10 minutes, then capped it with their lids, which had been put into a pot of water just after it boiled. You don't want to boil any lid with plastic parts. A taste test assured me that a spoonful of this will go down easily. I've been cleaning up and taking pictures of my vintage finds, and have begun adding them to my shop. Have a marvelous weekend, friends!
Posted by Laurie at 9:55 AM 3 comments: 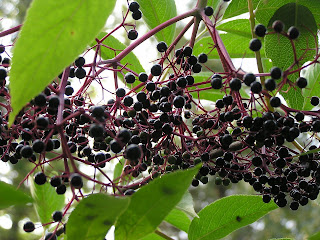 I juiced a batch of elderberries today. I think I'll be turning this batch into jelly tomorrow, instead of the usual medicine. I hear it's pretty tasty.
Posted by Laurie at 6:33 AM 1 comment: 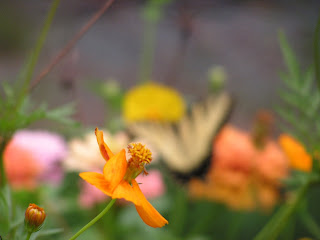 The butterflies have been amazing this year. I like this out of focus picture from the garden, with the swallowtail in the background. I had the pleasure of meeting Jennie Keatts this week. We'd been facebook friends, and commented on each other's blogs, but had never met face to face. I stopped by Jugtown pottery, where she has her studio, and we had a lovely visit. We're only about 5 miles apart. Such a short distance, really, for another kindred spirit. There are some other new friends to tell you about this week. I'll save that for another day. I'm enjoying a rainy morning here on the homestead. Wishing you a happy Thursday!
Posted by Laurie at 9:56 PM 1 comment: 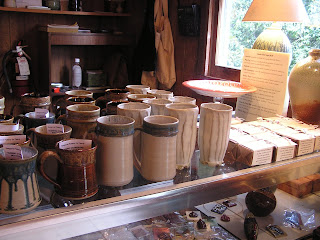 It was a thoroughly enjoyable day yesterday. I met all sorts of lovely and interesting folks, including some from my hometown of Seaford, NY. It's truly a small world. It was heartening to see the many folks who came out in support of CAI. I guess I'm getting seasoned, this being my second time minding the shop at Whynot Pottery. Meredith did have to give me a step by step play of changing the register tape over the phone, but all in all it went very smoothly. She says I'm ready for retail now. There are a few mugs and Green Tea soaps left. Contact me or Whynot Pottery if you missed us on Saturday, and want to lend your support. I feel so grateful to live in a community of such caring people.
Posted by Laurie at 10:43 PM 1 comment: 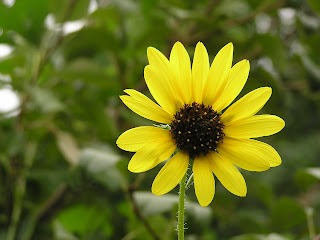 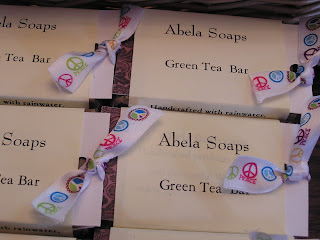 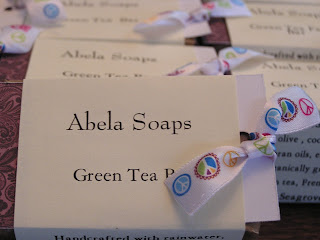 Doing the last minute prepping for tomorrow's event. If you're nearby, stop by and see me at Whynot Pottery. Otherwise, please visit my etsy shop, and be the change you wish to see in the world. Happy Friday, friends!
Posted by Laurie at 11:00 AM No comments: 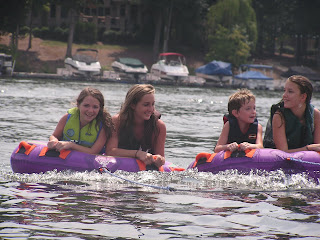 I took a day to play on Monday. My nieces and nephew had a grand time tubing, and all had their first try at skiing. A day on the water was just what I needed!
I've been getting soaps ready for this Saturday's Seagrove Potters for Peace, the proceeds of which will go to Central Asia Institute. If you haven't read Greg Mortenson's Three Cups of Tea, do so and prepare to be inspired. He's an excellent example of what one person can do to make a difference.
Posted by Laurie at 5:53 PM 2 comments: 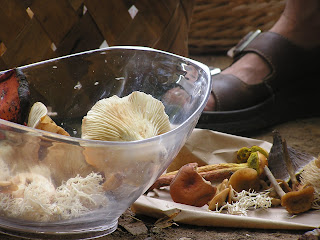 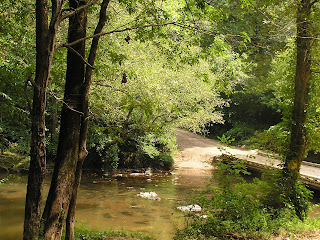 The mushroom class was a blast, though I feel like I've just dipped my toe in the water of mushroom knowledge. We learned a bit, gathered, then sampled the edibles at lunchtime. The bowl holds some of what we tasted. I made a couple of new friends, neighbors who live just up the road, and renewed some other friendships. Our class setting was along the banks of the Uwharrie River; a pretty spot. I spied at least 10 different mushrooms here yesterday. Now, if only I had enough hours to identify them all!
Posted by Laurie at 8:04 AM 1 comment:

Hunting of a Vegi Sort 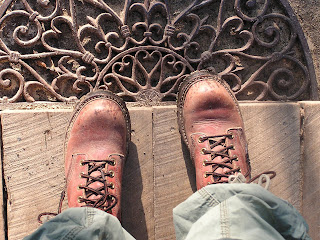 Off to hunt mushrooms! Have a happy day, friends!
Posted by Laurie at 8:11 AM 1 comment: 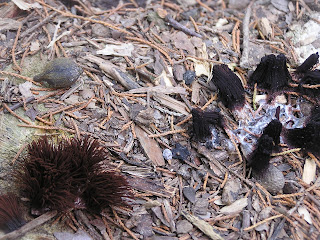 I trust all of you have been enjoying some delightful summer days. Lately, I've been getting requests for smaller, sample-sized bars of my soaps. I've noticed the nicer hotels and B&B's typically have 1.5 oz. bars, which works out well, as that's 1/4 of my bars. I've been working on tweaking my labels for these smaller sized bars, and playing with ribbons. I'm pleased with how they're shaping up.
The hot and steamy days here have brought forth a new round of mushrooms. I'm not sure what this is I saw this morning. Some sort of fungi, I'm thinking. It sprouted up on a stump, and is soft and silky feeling. I'm not very knowledgeable about fungi. I've gathered puffballs on this land, which were tasty cooked. But I know little else about what grows wild here. All that is getting ready to change, as I'm taking a mushroom class this Saturday, through STARworks. It's something I've always wanted to learn about, and from what I've heard, it promises to be a very entertaining class.
Over the weekend, Teresa introduced me to Antje Duvekot. I'm enjoying her music so much, I just had to share. I hope you enjoy her too!
Posted by Laurie at 12:23 PM 2 comments: