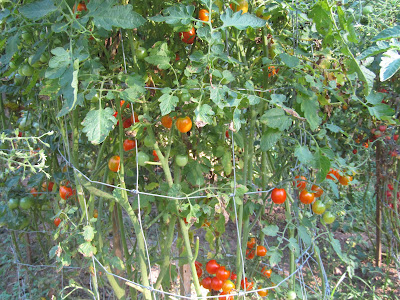 Hello, friends.  It's getting to be peak season in the garden.  I canned all the lima beans we picked last week.  Two jars didn't seal, so we had one that night, and I made succotash with the other.  I blanched and froze two bags of beans, with the excess that wouldn't fit in the canner.  I planted broccoli, cabbage, collard, and rutabaga seeds in the house, using lettuce containers as little greenhouses, and several of each have already germinated.  Raspberries, lettuce, the youngest blueberries, currants, parsley and house plants were fertilized.  Shredded paper was added to the compost bin.  I washed all the bedding, including pillow covers and mattress pad, and hung them on the line.  I noticed the first eggplant.  I'll pick it in the next few days, and now there are two more getting big.  Cucumbers, tromboncino and zucchini squash, red noodle beans and pole beans, kale, blueberries and tomatoes were harvested.  Some sprigs of lambs quarter were gathered, and some chanterelles.  Most are drying, but I enjoyed a couple in a breakfast scramble.  I pulled Spanish rice from the freezer to have with bean burritos one night.  Our tomatoes were chopped to use in these. 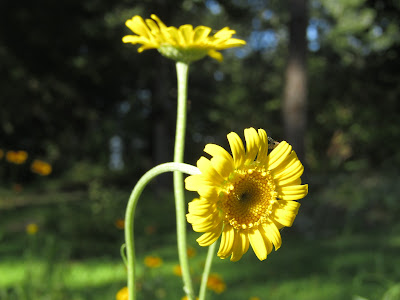 One of the galleries that carries my soap reopened, and asked for more soap.  After delivering soap, I went to a favorite thrift shop, just up the road from them.  It's the first one I've been to in 2020.  I didn't find much, but got a padded hanger for .25, and a Christmas stocking for our GD for $1.  My last stop was Harris Teeter.  They had 4 packs of organic garbanzo beans on sale for $3.19 and their organic baked beans were being discontinued, so were B1G1, which ended up being .74 ea.  I stocked up on both of these, as well as organic raisins, which were on sale for $4.49/20 oz.  That's much higher than I usually pay, but we were running low, and I wanted to be sure to have some on the shelf for baking.  Other sale items were freezer bags, mozzarella, organic juice and organic bell pepper.  I thought I might get a jar of yeast, but they had none.  After I got back home, I harvested more elderberries, and added them to tincture jars.  I also harvested the older potatoes in containers, before the expected rain.  We did get rain, for which we were very thankful. 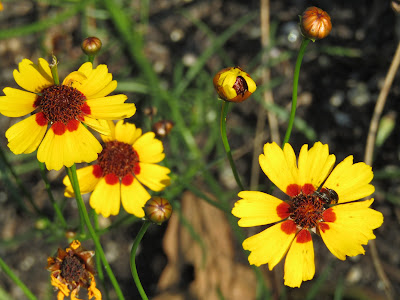 Some tomatoes were canned, as well as sweet pickle relish, which I use in making Thousand Island dressing.  I don't know about your household, but it seems all sorts of things have been breaking around ours.  I mentioned the a/c a few weeks back, which is still not fixed, despite resorting to a repair person.  Every time I can, it freezes up, and has to be turned off for a while.  J & I went under the house last week, and tried to find the leak with soapy water, but couldn't find a thing, inside or at the unit outside.  I also mentioned we replaced our refrigerator, which had broken and had no parts available.  It also sounded very much like a duck quacking.  They supposedly brought the ice maker for the new one, but it wasn't the right one, and will not be available until late August, right about the time things start cooling down. Thankfully, I have a couple of ice trays to use for the ice bath for canning tomatoes.  I just have to remember to make ice.  All the electronics on our stove, and the oven stopped working.  Thankfully, I still had the stove top working.  J decided after researching to get a USA made one with a convection oven, and it also has an air fryer feature.  I'm going to have to learn to use both.  The pump that brings our drinking (rain)water into the house quit working, and our powder coat oven was only heating to 250, though it needs to get to 500 to bake our orders correctly.  J worked on both, and we are hopefully at the end of all our malfunctioning stuff, other than the a/c.  J bought a gallon of skim milk by mistake.  I made yogurt with 1/2 skim and 1/2 whole milk. 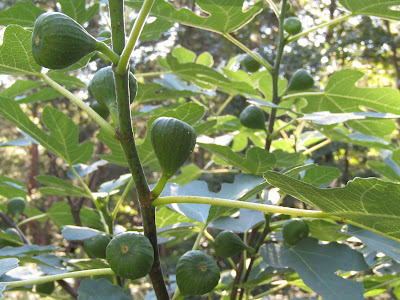 In reading the Forager Chef blog (in the side bar), I learned about sweet fern, which is not a true fern, but is edible and medicinal, as well as being aromatic.  It is native to NC, though it may be more suited to the mountains.  We're at the upper edge of its limits, but I'd like to try growing some.  I'll keep a look out, but I've not seen it among the ferns that grow here.  The chicken coop was cleaned on Sunday.  It was quick job this time, but we needed to head to some potter friends who had lost their kiln shed in a fire on Saturday.  I cut a bouquet for us and them, and garden veggies were shared with them and others.  I tried a recipe for cucumber soup.  J turned his nose up after tasting it.  I ate some with dinner, but wasn't a fan either, so I strained it and gave the solids to the chickens.  Several of our younger fig trees are loaded with fruit this year.  We love them fresh and in fig bread.  Shredded paper and cardboard were emptied into the compost bin.  The neighbor that I gave a massage to a few weeks ago came by again  He had injured himself moving many 50-60# bags of corn.  It's nice to still be doing occasional massage work.  Here's to a smoother week for us all.

I welcome you to use my kiln if you need 500 degrees! Janice

It looks wonderful in your neck of the woods. I love your flower photos. I have been slicing and freezing zucchini for the last few weeks; am making tomato sauce and freezing it later this week. More pesto to come...This time of year the garden keeps us all busy!

You are so sweet, Janice! He's fixed it for now. Would your kiln accommodate a 36" stand?

I'm glad to hear about your garden harvest, April. It's good you're able to put some up too.

Mercury retrograde is rough on electronics and appliances! I had to order a new frig and it should be delivered this weekend. My truck battery died and all of the light bulbs seem to be going out at the same time! If my canner breaks I am in trouble!

I hear you about the canner!

My goodness but that’s a lot of things breaking at the same time! It seems that you are getting by just fine. It pays to be practical, especially during these times.

Glad you got some rain, we are still waiting.

Enjoy the rest of your week! I am dog sitting and feel like I’m on vacation!

It looks like there are chances of rain here the next few days. I hope you get some too. We adore our pet sitter! Enjoy your time there!

My breakdown problem has been with my washing machine. It started filling up with water only 1/3 of the way at the beginning of the lockdown. We decided to limp along because we didn't want any strangers in the house. When things opened back up we went to Lowes and bought the very last one they had (including in the warehouse). Everyone had just received their stimulus checks and decided to go to Lowes and buy a washing machine. When it finally arrived, it only filled water up to 3 inches! It would only wash 3 towels at a time. We went back, exchanged it and the second one only filled up to 5 inches! We went back, bought the second-most expensive because I had been struggling for 4 months by this time and was tired of hauling water to the laundry room. Six weeks later, it arrived and I HATE IT! It won't pause and soak! Seriously! My gardening clothes are nasty and without soaking, they won't come clean. I dread going back to exchange it. The salespeople, delivery people, and credit card people know us by name now.
Jeannie (also know as "that woman") @ GetMeToTheCountry

I'm sorry about your washer, but "that woman" made me laugh. They do sound like some pretty sad washing machines. They sure don't make things like they used to. I've had my dryer 25 years, and bought it used (just a year or two old). We have had to replace our washer that I bought at the same time though.