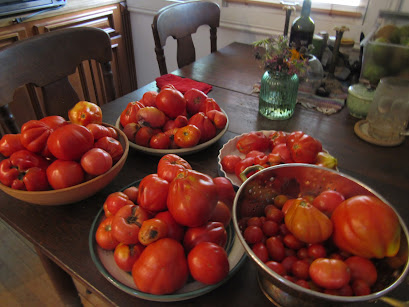 Hello, friends.  I hope you've had a good week.  Last week, I went through Swagbucks for 6% back on a purchase of business cards.  I drove a friend to an appointment.  While waiting in my car, I read one of my free Kindle books.  He is given $60 by the VA for travel (it's 1.5 hrs each way), and he passed that on to me.  Just last week, someone asked my favorite melon, and I replied honeydew, though they are rare to find in this area.  On the way home, I stopped at a co-op on the route, and they had honeydew melons!  Though not cheap at $4.99, I bought one, and it was delicious.  I saved seeds, which we can hopefully get to grow here.  We have melon challenges here, with watermelons in particular ending up a teardrop shape, and rotting.  We'll keep building up the soil, and hoping.  With our beets and one of our apples, I made apple beet salad.  I used our noodle beans, red onion and thyme in a roasted bean dish.  Our asian cucumbers and sliced tomato rounded out the menu. 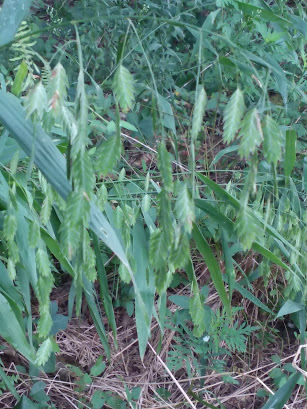 I boiled eggs for the pups.  J cut up a watermelon, and gave the chickens the rinds.  A bin of shredded paper and cardboard were added to the compost bin.  Dried lemon verbena, oregano and thyme were added to jars.  More chanterelle mushrooms were harvested.  Those that weren't eaten were dried.  Garden harvests last week included tromboncino squash, cucumbers, tomatoes, peppers, eggplant, noodle beans, lima beans, apples, pears, figs, hazelnuts, basil, chives, and spaghetti squash.  I canned tomato juice, tromboncino squash, and tomatoes.  With the latest recommendations being 85-90 minutes, depending on who you read, to water bath tomatoes, I have been pressure canning them instead, at 25 mins. per quart.  The tomato skins were dehydrated, along with some extra chives.  The extra tomato juice from canning tomatoes was strained and saved in the fridge.  I used homegrown dried mint in a batch of peppermint, rosemary and eucalyptus soap.  A small amount of lemon balm was harvested and dried for teas. 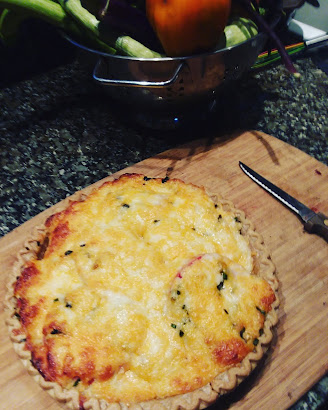 Our tomatoes, cucumber, basil and oregano were used in a pasta salad, along with black and green olives and hemp seed.  A tomato pie was made, with our tomatoes and herbs.   The pups were given chopped veggies with their dinners, whatever needed using.  It varied from cucumbers, beans that are a bit mature, tomatoes, carrots with wireworm damage, and squash.  I cut back on their kibble a little when they get their veggies.  While J was in our local community, he picked up a library book for me, saving me the trip.  I mailed a check for deposit, as we weren't sure when we'd be in town again.  It's worked well several times while we've been in lockdown.  On Friday, I went through our winter squash patch.  There were several dead vines, and I ended up harvesting 14 squash of different varieties.  Batches of yogurt and hummingbird food were made. 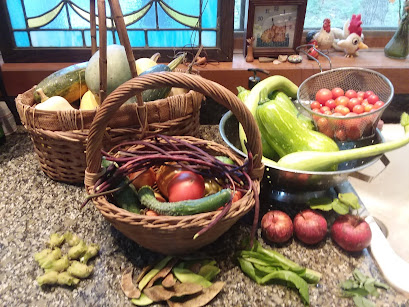 Fritters were made with leftover squash and green beans, and frozen corn. Our pears are abundant this year.  I used one in broccoli salad.  Most are the cooking type, so they'll be put in storage until I can figure out what to do with them.  I picked a basket full most days.  I'm thinking of dehydrating some of them for snacks.  There was a gift I needed to deliver, for a friend's son's wedding.  While there, we went on a glorious boat ride.  The day started cloudy, but ended up being gorgeous, and much cooler than it's been.  There's something so soothing about being at the water.  Perhaps it's in my genes.  My Dad was a Navy man, and I grew up on Long Island.  My paternal grandmother lived on a tiny Irish island, and my Italian maternal grandparents and Irish grandfather all lived close to the sea before emigrating.  All I know is it feels like a proper summer, now that I've had a boat ride.
Posted by Laurie at 6:30 AM

I'm with you on the honeydew. The melon I've been getting at Publix has been outstanding! It is so refreshing!

Sounds like you have abundance coming out of your garden. How wonderful that you can stock your pantry with so many goodies.

Glad you were able to get your boatride in!

So glad to have found honeydew, and a good one! Thanks, the boat ride was wonderful!

Tomato pie, yum! I haven't made one this year. It's not Jeff's favorite. I did make a tomato tart with frozen puff pastry. It was a nice treat for lunch one day.
How wonderful that you went boating! I haven't done that in years.

Thanks, April. I'm glad it made you smile.

I was not aware the times had changed for canning tomatoes. My canning guide said 50 minutes for water bath and didn't give a time for pressure canning. I will be pressure canning them for 25 minutes from now on. Better safe than sorry.
The tromboncino squashes I picked (which were too old) this week were bland as you said - didn't matter, we ate them anyway. If you add enough butter, cheese, and spices, anything is good. Hopefully, they will bloom again now and I will get more.
Jeannie@GetMeToTheCountry

So true about butter, cheese, and spices! I hadn't known about the time changes for tomatoes either, until I ran across it this year.