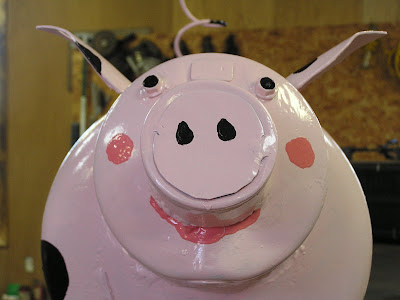 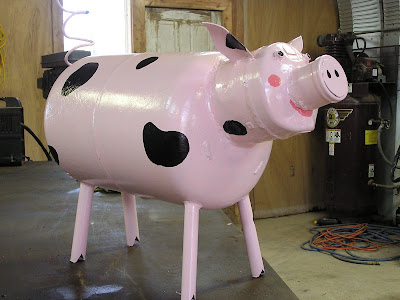 
J and I worked on some metal art over the weekend. One was a pig sculpture. I painted the spots. J fabricated it, and did the remainder of the painting.
Posted by Laurie at 12:43 PM 1 comment: 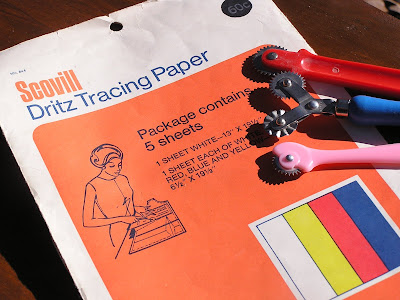 Since I've learned to use the dremel tool, and got the whole process figured out, I've gotten a number of plates and bases matched up and turned into dessert pedestals. Some went to a local gallery, and others were listed in my shop. My sweet sister & I got together this morning, to celebrate her birthday. We had a little time to search for treasures. I found a couple of plates for future dessert pedestals, and she found a little sombrero, perfect for the Mexican-themed dinner she was fixing tonight.

Joseph bought a wonderful set of vintage tracing paper and wheels for me this week. It will help in creating my newest products. He's a thoughtful guy, that J. When I have something worthy, I'll share it here. Happy weekend, friends!
Posted by Laurie at 3:59 PM 2 comments: 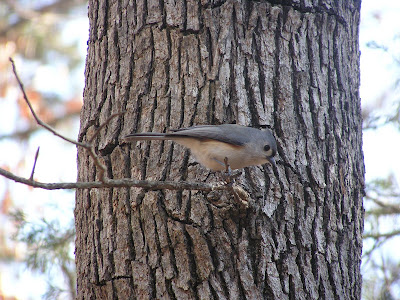 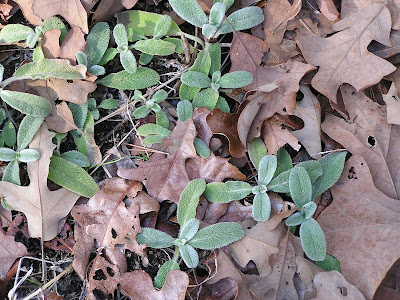 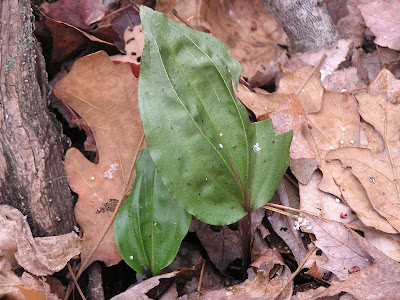 I've been noticing what is still alive and growing, this cold winter. It's been surprising to see, with temps dipping into the teens, and several snowfalls. Some lamb's ears, skunk cabbage and a hardy black-eyed Susan I didn't get a pic of.
Things that have inspired me recently:

An awesome ribbon organizer here
Snowberries to decorate with during the winter
This lovely blog
Thinking of making these tomorrow
Posted by Laurie at 7:58 PM No comments:

Fun at the Goodwill 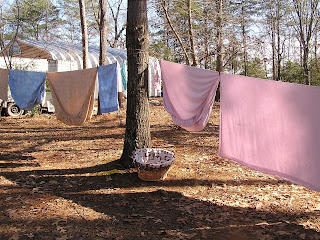 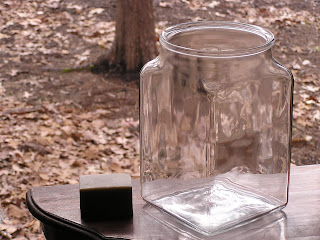 I love old glass. The ripples, imperfections and character of it. My favorite picture frame has old, bubbly glass. So, I was delighted to find this big glass jar at Goodwill, with it's ripples. I somehow think it's made for my laundry area, but I can think of a number of uses. If I had a bricks and mortar store, it would be perfect for displaying lavender sachets, or other small items. It's quite large, at 10 1/2 inches tall with 6 in sides. I put my soap next to it, a big 6 oz bar, for comparison. I want to do something useful with it here at home. What uses can you see for it?
While I was in the pantry yesterday, I noticed some forlorn cans of artichoke hearts. I bought them with the best of intentions, but it's not something I usually think about, so there they were. I resolved to change that, and after a look on Google, made this recipe by The Pioneer Woman. I've added my notations to her recipe.
Spaghetti with Artichoke Hearts and Tomatoes
2 tbs olive oil
2 tbs butter
3 cloves garlic, minced
1/2 medium onion, finely diced
1 can artichoke hearts (14.5 oz) drained
1 can diced tomatoes with juice (14.5 oz)
1 cup heavy cream
1/2 cup chicken broth (I used vegi broth)
1/2 tsp nutmeg (left this out)
salt & pepper, to taste
1 pound thin spaghetti (use what you've got. I used penne)
1 cup Parmesan cheese, freshly grated (I used Romano)
2 tbs fresh chives (or other herbs) chopped (I used chives, oregano & parsley 3-4 tbs)
Cook spaghetti until al dente. Drain and set aside.
Melt olive oil & butter in large skillet over medium heat. Add onions & garlic & saute 2-3 mins.
Add artichoke hearts & tomatoes. Stir & cook for 8-10 mins. Reduce heat to low.
Stir in cream and broth. Add salt & pepper to taste (do not undersalt!).
Cook over low heat until heated through, then turn off heat.
Place drained pasta in a large bowl (I used the pot... less dirty dishes) Sprinkle with Parmesan. Pour sauce over the top. Add herbs. Toss lightly to combine and coat.
Delicious! (Her words, but true)
Posted by Laurie at 12:31 PM 2 comments: 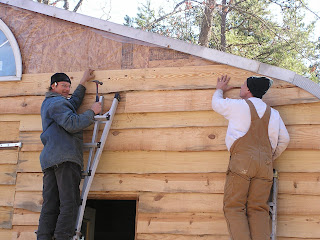 The men got the last of the siding on the fab shop over the weekend, and it's looking good. Things are moving right along.
The past two days, I've done more massage work than I've done in several years. So today is going to be a "pottering" day. Straightening up, laundering those many sets of sheets, and hopefully starting on my newest fun project.
On the way home last night, I decided to stop by Goodwill, and see what treasures my tip money could buy. I found one I'm especially fond of. It has many possibilities, and I'm deciding how I want to use it. I think I'll take some pics, and see what ideas you might come up with.
Posted by Laurie at 8:41 AM No comments: 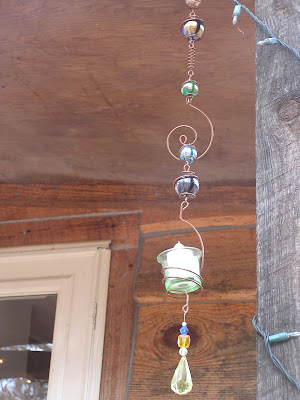 My sweet sister gifted me with this lovely candle holder. Have a sparkling weekend, friends!
Posted by Laurie at 10:28 AM 2 comments: 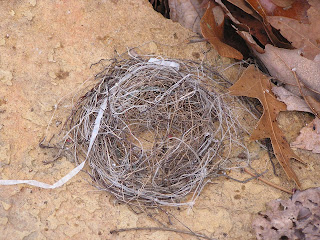 I've been enjoying this birdnest for a few months now. The ones I find in better shape, I save for my Christmas tree. I'm gathering quite a collection of them, and it's one of my favorite things to place on the tree. But this one, I put on a large rock near the bird feeder I fill most often.
The ice and snow are slowly melting. I've been working on dessert pedestals, and taking photos for my etsy shop. I've sorted through our collection of seeds, made my 2011 garden list, and found what I'd like in a couple of catalogs. I need J to look it over, before we order. There's always that anticipation that this year's garden will be the best ever. Thoughts of green, growing things dance through my head...
Posted by Laurie at 10:44 AM 2 comments: 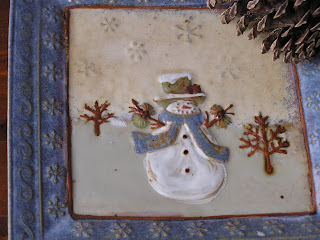 It's been a day of simple pleasures, here on the homestead. Watching the snowflakes fall. The whir of the sewing machine, as I darned some soft, pastel cotton summer sheets. The burst of summer flavor, as I bit into a blueberry in the Black & Blue jam on toasted homemade bread. The feeders, covered with a variety of birds. The soft snore of a cat on the hearth. I do so love a snow day.
Posted by Laurie at 6:33 PM 2 comments: 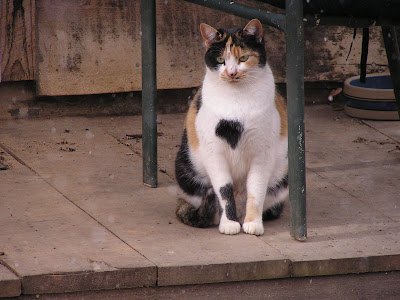 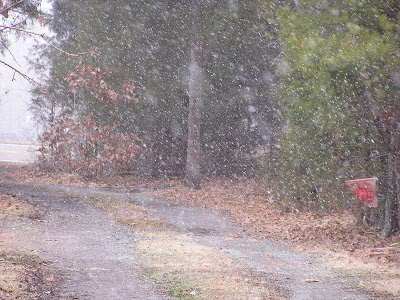 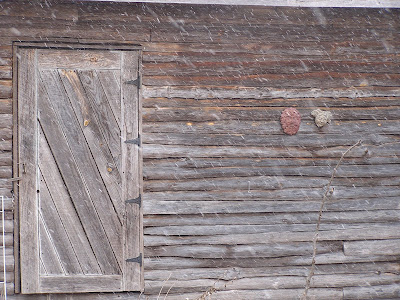 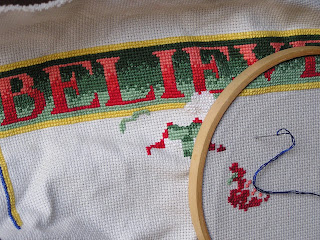 It seems I've spent a fair amount of time with needles lately. Not the nursing type, but the stitchery type. I've worked on the long-neglected cross-stitch in the picture. I've mended some things, namely cashmere sweaters, which are my go-to winter attire, all thrifted of course. I've learned to use the darning feature on the sewing machine, to repair some massage sheets. I'd always been under the assumption that darning was only done by hand. Who knew?! And I've been brainstorming some new shop ideas, which will involve a bit of stitching craftiness. I hope you've been having fun, friends, with whatever you've been up to, in this bright new year.
Posted by Laurie at 7:48 AM 1 comment: