It's All About the Garden & Frugal Accomplishments 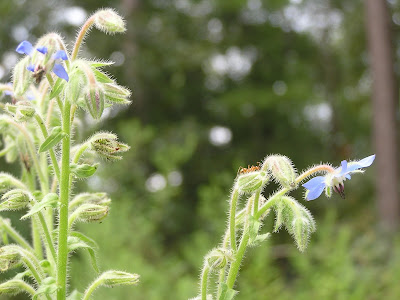 Hello, friends.  Last week, I prepared cucumbers and squash every chance I could.  For one dinner, I made a squash/tomato/corn dish with leftover beans & rice, and asian cucumbers.  I took the same cucumber and squash dishes to a gathering later in the week.  I requested a book from the library.  Eggs were boiled for the pups.  As my cold was still hanging on, I continued to eat a good amount of garlic in eggs and hummus.  One of the things in the fridge I cleaned out for friends was a bottle of Kick*ss Immune Support, so I've also been taking that as well.  While catching up on ironing, just 6 pieces, I found two pieces that needed small areas of mending, so I guess next up is mending.  A bag of pumpkin was defrosted, and used in brownies. 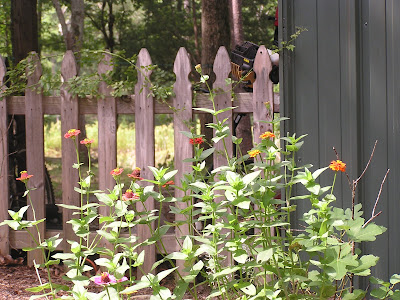 From the garden, I'm gathering cucumbers, tromboncino squash, and okra.  My husband went to pick up an order I had placed online from the hardware store, but they had no record of it.  They apparently had a glitch on their website, and I received an email saying they'll be sending me a $5 gift card for the inconvenience.  Thankfully, the order was for one item, unlike recent others for multiple items, so it was easy enough for him to just go get the item.  The $5 will more than make up for the 2% I was to get back from ebates.  We're opening windows on cool nights, and closing them as the day heats up.  This year, I started tomato seeds from a homestead friend, which I believe are called Blue Berries.  Their shoulders start out blue.  I'm curious to find out what they taste like. 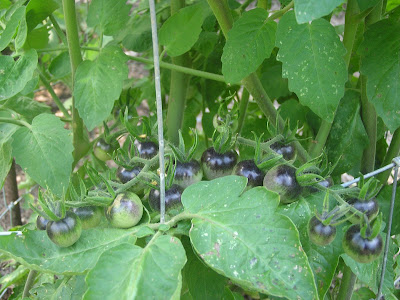 While in town for work, I stopped at the salvage store, and found a few good deals... organic chickpeas .50/can, organic juices $1, black olives .50, natural almonds .50/6 oz.  I stopped by the bank and picked up the $100 gift card I won.  Tractor Supply sent a 10% off coupon, so I used that when buying chicken feed, dog treats, and a bag of dogfood that was on clearance.  I made a salad with the last of our lettuce to go along with leftover spaghetti for dinner.  The pups got chopped cucumber each night, and I've been cutting up small apples and pears with brown spots for them.  Not much fruit once I cut away the bad spots, but at least they're getting a few pieces in with their cucumber and kibble.  The chickens are getting cucumbers every day too, as long as we have more than we can use.  This time of year, it's all about the garden... harvesting, weeding, watering, thinning, cooking and preserving... repeat....

I finally got around to roasting the peanuts we grew a couple of summers ago, and recently shelled.  There was only about a cup of nuts, but it made lovely peanut butter, which I enjoyed on crackers.  I weeded and thinned the carrot bed some more.   Weeds went to the chickens and I added the thinned carrots to the broth bag.  There are now 4 gallon bags of vegi scraps, so it soon will be time to make broth.  Though the cucumbers are slowing down, there are still plenty, so I canned a second batch of sweet pickle relish, which used up a bag of red pepper slices I froze last summer.  Elderberries were harvested and cleaned, which filled the remainder of the 1/2 gallon jar of tincture I started last week.  Another day, I picked more and began a second jar.  Removing elderberries from the stems is a rather time consuming chore.  Sitting on the porch with the pups, which reduces the berry stains in the house at the same time, and watching the birds at the feeders helps pass the time.   Elderberry leaves and stems have cyanide-inducing glycosides in them, so you want to remove as much as possible.  The berries do as well, but cooking them makes them safe to use, which I do once I strain it and add honey.  If you're interested in elderberry, I suggest you look into some of the online research.  The first few (purple) green beans were gathered, as well as lima beans. 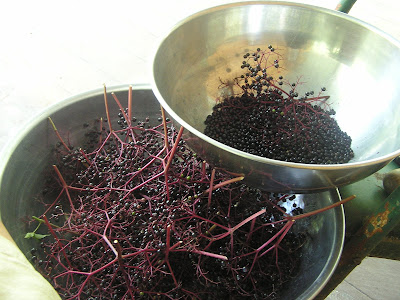 At week's start, there were 8 peaches remaining, none of them close to ripe.  By Wednesday, all that was left were pits on the ground.  So, out of dozens, we will not have one peach this year.  I'm a good sharer, and believe myself to be compassionate, but this definitely crosses the line.  Now we've begun seeing the squirrels move on to eating our plums.  Besides all the acorns and hickory nuts in the forest, there are lots of sunflower seeds below the feeders they can easily eat.  An occasional piece of fruit is fine too, just not every.single.fruit on several trees.  Grrrr.  We cleaned up the gardens so much, there was not much lamb's quarter this year to harvest.  I'd been gathering it little by little.  Thank goodness it keeps very well in the crisper.  I finally had enough to blanche and freeze 2 cups, which will be enough for one recipe.  Our plan is to dedicate an area for lamb's quarter; just have to decide where that is.  I had bought mushrooms that were marked down on Tuesday.  They looked great, but I knew I needed to use them quick.  J asked for mushroom gravy, which I'd never made.   I'm so glad he asked.  We really enjoyed it over jasmine rice, with cucumbers, our first yellow tomatoes & olives on the side.  The only changes I made was subbing butter for the margarine, and I had no marjoram.  Yum!  We enjoyed the leftovers with our first caprese salad of the year. 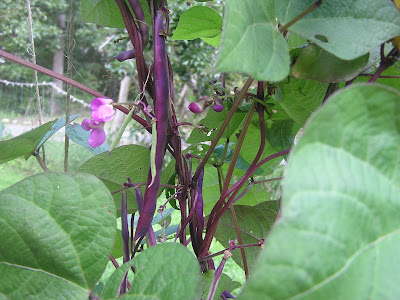 Our new shower was ready to use on Thursday.  After taking an outdoor shower earlier in the day to wash my hair, I took another in the shower that night before bed.  Both were lovely.  I'll try to take a photo to share next week.  I gathered marigolds and dyer's coreopsis for future dye pots.  On Friday, three loads of laundry were done with homemade soap, and hung on the line.  I'm glad I got them in before supper, as we had an unexpected rain shower.  That worked out great, because just a little earlier, J worked up a spot, and we planted two varieties of kale.  Now the seeds are watered in nicely.  Eggplant doesn't last very well once it's picked.  So, when I picked 2 on Saturday, adding to the 2 already in the crisper, I decided to make Pasta Norma.  That was only half of the eggplant needed, so I used some in the freezer from last year for the remainder; perfect, as it was already cubed up.  Yogurt and hummingbird food were made, and the usual washing of plastic bags for reuse, adding fruit & vegi scraps to the compost or vegi broth bag, and shredding paper.  The birds are enjoying the blueberries, and the harvest is dwindling.  I may get one more picking, then leave the rest for the birds.  The concord grapes are starting to ripen now, so they'll be up next.  I see grape jelly in my future.  Have a wonderful week, friends!

It can take us a week or more to use a pint of mushrooms. To keep them fresher longer, I store them in the fridge crisper drawer in a paper bag with a folded paper towel at the bottom, with the top folded closed. They stay fresher longer, and then tend to slowly dry out rather than going bad. We use them sliced for salads at the beginning of the week, and for pizza or sautéed in dishes at the end of the week.

Thanks for the excellent tip, Debra! Mushrooms are so good for you, I'm trying to remember to use them more, so that will come in handy. I always think of you when putting my avocados in the crisper, as you taught me that one too. It definitely helps.

You have been busy! Sometimes when I forget to use up mushrooms stored in a paper bag they completely dry up .. and I'll put them in an electric coffee grinder used for spices .. pulverized they add great flavor to gravy or soup.

Your opening photograph is...wait for it...just beautiful. I know I have said this before, but I always find peace and rest in your work. Thank you.