What We're Eating, What We're Not & Frugal Accomplishments 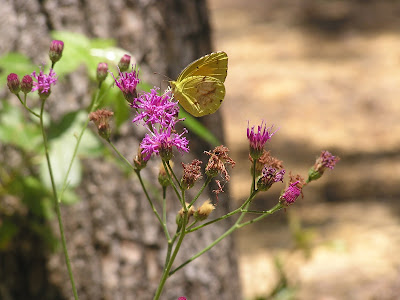 Hello friends.  Knowing the week ahead would be busy, I harvested and prepped lettuce for salads for the week.  After not harvesting blueberries a couple of days, I picked 1 1/4 lbs, though I could see the birds and critters had been enjoying them too.  I canned a few small jars of jam with them, and dried the skins that were removed for bird suet.  After having a working weekend, and knowing what the week ahead looked like,on Monday afternoon, I decided to spend a little time on natural dyeing.  For the first time, I used a mordant (alum) on the materials prior to dyeing, and gathered and simmered a dye pot of virginia creeper.  I've read it gives a peach or salmon dye.  I'm going to try cutting and boiling a larger batch, as the first gave almost no color.  I did put fabrics in the dye pot, wondering if the mordant would help, but not surprisingly, they all just look sort of dingy.   If I do get a good result, I'll be sure to share.  I added warm up water to the washer, used homemade laundry soap, and hung it on the line.  I wrote swagbucks customer support regarding a purchase that was not credited, and received the credit, several weeks earlier than I would have (you usually see it "pending" for a few weeks).  It was only for $2 and change, but it all adds up.  J returned a can of paint that wasn't needed. 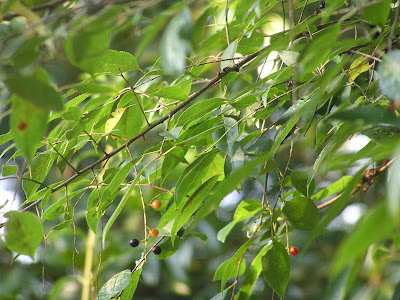 After working in town, I stopped by the library and picked up a book.  The squirrels have been a real challenge here lately.  Three times during the week, I found one in the bird feeder attached to the kitchen window!  I was hoping with changing to the Squirrel Buster feeders, they'd pretty much stay in the woods, eating the masses of acorns and hickory nuts there.  But, it didn't happen.  They've been eating our immature apples and pears.  On Wednesday, I noticed our fullest peach tree was down by half.  On Thursday, while I was at work, J saw a squirrel eating a peach, and every single peach was off that tree (several dozen).  At that point, he took matters into his own hands, and I can't say I blame him.  I was really looking forward to those peaches.  There are a dozen or so left on another tree, that we'll get if we're lucky.  There are still plenty of squirrels, so I don't know.  The Japanese beetles have been munching our apples and pears.  At least half our apples are decimated.  They got our first and only nectarine too.  But hey, there are some good things.  We're still getting plenty of cucumbers, a few summer squash, and we got two beautiful eggplant this week.  Our first tomato is starting to color up.  We've picked the first 5 okra.  I'm trying to keep looking on the bright side. 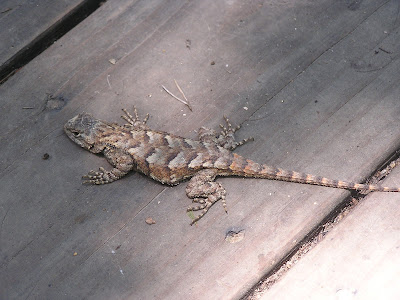 I brought lunch, my water bottle and snacks for each of the days I worked shop sitting.  Though there are customers that come and go, there are always several hours that I have free. I brought the guy's bookkeeping and some of my tax stuff to work on, soaps to wrap, and went through a good amount of my ever full inbox.  I also brought several things to read.  I packed up the drain we bought in the wrong size to return.  As I hadn't been able to pick blueberries the days I worked, I did that Sunday morning, and gathered over 2 lbs.  I also picked several small apples that were ripe, though some had spots from the Japanese beetles.  I've been trying to remember to eat some blueberries every day.  On Sunday, J harvested the rest of our potatoes, cultivated, then planted seeds of cabbage, broccoli, collards, winter salad blend, rutabagas, chard and turnips.  The potato harvest was more than we expected, which was nice.  Once they're ready to store, I'll try to remember to weigh them.  Things are really dry here again, so J's been watering some every day. 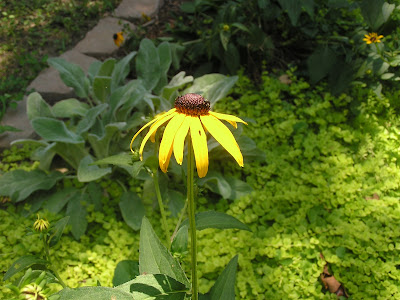 On Friday evening, J integrated the chicks into the rest of the flock.  All seems to be going well on that front.  Our sick rooster is perking up some and is more interested in food, so we believe he's starting to heal.  We're happy about that.  We enjoyed cantaloupe, and brought the rinds out for the chickens, which were mightily enjoyed.  Of course, they're getting cucumbers every day too.  It's a rule that everybody on the homestead has to eat some cucumber every day :o).  Well, I look forward to catching up some around the homestead this week, and also to spending a little time with my sister later in the week.  Hope your week is a good one, friends!

Garden critters can be a challenge. Two pounds of blueberries - oh wow! What a good crop.

That's for sure, Mrs. Mac! It's the first year we are getting this many blueberries. Happy!