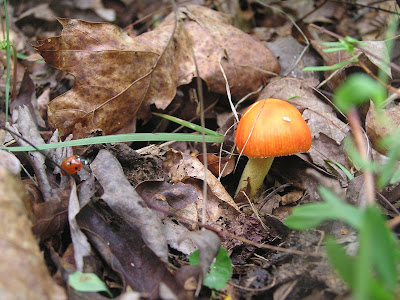 Hello, friends.  Hot, rainy days have made it perfect mushroom weather.  There seem to be so many varieties everywhere.  I recently joined a fb mushroom group in our state, hoping to learn more, especially about which are edible.  Though I've taken a class, I don't feel confident enough to risk it.  Before heading to town one day, I cut up a banana along with our pawpaws and blueberries, for a snack for J & I.  While stopping to return a few things at the hardware store, I checked the marked down plants, and brought home 4 red thyme plants for .25 each.  We planted them in the bed next to the porch, hoping they'll be happy enough to crawl over the rocks, and mingle with the creeping jenny.  Another day, we planted lettuce and broccoli seeds, and replanted chard.  For some reason, I'm having a hard time growing chard this year.  The spring lettuce that had bolted was given to the chickens, with a few plants left for seed.  When planting the lettuce, I noticed both packets were a few years old.  Reading something reminded me that oak leaf lettuce does well in both the heat and the cool, so I ordered both a red and a green variety of it.  I used hay a neighbor gave us to mulch mullein and other plants in a bed near the pond. 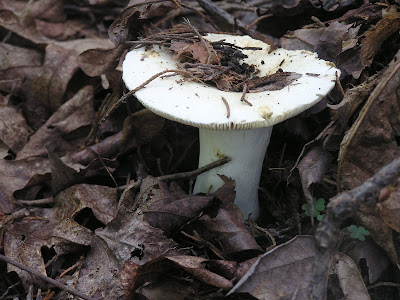 Like the pickles, we still have lots of canned summer squash on the shelves, so I am not planning on canning any this year.  I've tried it frozen and dehydrated, and am not fond of either, so we'll eat what we can fresh, and share it with the critters and anyone who wants some.  We shared some with one of J's customers one day, and his business partner and some friends other days.  Our friends gifted J a couple of pieces of their pottery, saying J didn't charge them enough for work he did.  A new batch of throat spray was made, using colloidal silver and essential oils.  For a dinner, I made a dish using summer squash and kalamata olives, one using collards we froze last fall, and cut up cucumbers and tomatoes.  Though the collards look beautiful, like the day they were frozen (we just put a pile of whole leaves with stems in a paper grocery bag, fold it up and tape it), they are getting rather tough.  We've planted some in the fall garden, so with any luck, will be eating them fresh by late September. 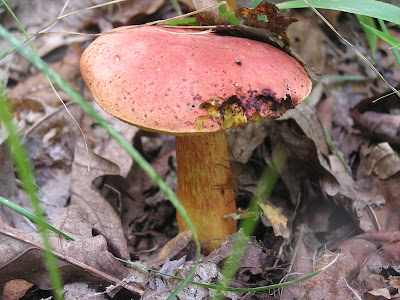 After delivering soap to a B&B, I went by two thrift stores.  I bought a shirt at one for $3, and at the other, resisted a gorgeous handmade pottery bowl that would have been a lovely dog dish, but much too expensive at $18.50.  Both stores had been totally rearranged since the last time I was in, and there didn't seem to be near as many good bargains.  I stopped by a market and bought 6/$1 ears of local corn.  It's the second time I've been to this fairly new market, and the owner has encouraged me to try my soaps there.  I'm not sure I want to add another consignment spot, but she may be interested in buying them outright, so I'm considering it.  I received a lovely note in the mail, along with some food gifts from friends I recently helped.  A few days ago, I read of a group that does gleaning of farms in this state, and I signed up to be a volunteer.   I used to do more volunteering when I lived in the city.  It's a bit more difficult living so far from anything now.  I love the idea of the gleaning group, which helps feed the hungry.  Having some knowledge of harvesting produce makes it seem like a good fit.  Being I live in a rural area, I'm hopeful some opportunities will arise that are not too far away.

I purchased what I hope is the last few things for our bathroom redo, and paid for a portion of it with a gift card.  I got all the potatoes put away and crunched the numbers, and it appears we harvested over 50# of potatoes!  And we still have a small patch left to harvest.  That's much better than we thought.  I got an email invite to Pinecone Research, but like last time, when I put in my info, it said my demographics weren't needed.  It was worth a try.  I received a dollar in the mail from Nielsen, which made me laugh, as we're not television watchers.  They called some years back, and I had to tell them we did not watch TV, but they did have me fill out a diary with the few movies we watched. This time, they followed up with a phone survey, and will be sending "enough for a cup of coffee" as a thank you.  M treated J & I to dinner, as thanks for taking him to the restaurant.  Occasionally, when the local farmers bring their equipment here for J to fix, there are visitors that come along, such as the time there was a bird's nest.  Not long ago, he found a chipmunk in some equipment, which promptly ran under a tarp in front of the shop.  We've been seeing it around the bird feeders, but it moves so quick, it's been tough to get a good photo.  This one's the best I've been able to do.  There were several that lived here before the cats showed up years back.  Now that we're down to one cat, maybe it will have a chance to prosper.  I love to see them, and hope so.

On a walk one morning, the sole of one of my muck boots separated from the rest.  I kept walking, picked it up on the way back, and repaired it when I got home. It's a good thing it was fixable, because the next day, I planned to clean the chicken coop, and you definitely want muck boots to do that.  When I cleaned the coop, I brought in a large, interesting limb that had fallen in their yard for extra roosting space.  J plans to add some roosts, but until then, I'm hoping this will help.  I spent some time going through things, and putting things away.  It always feels better when I take the time to do that. J harvested most of the winter squash.  Between all the rain and squash borers, vines were dying and some were starting to rot, so it seemed the time.  We weighed them as we brought them in, and ended up with over 100# of winter squash, with the largest cushaw weighing close to 14 lbs!   The two largest cheese wheel pumpkins had begun to rot, so they were cut up and boiled.  We used 2 1/2 cups of it to make ice cream.  Years ago, I had saved this recipe (scroll to bottom), and thought it was the perfect time to try it out.  It calls for a different winter squash, but I interchange them in other recipes, so why not this one?  I had to make up some pumpkin spice, but that was quick and easy.  J's grilling our potatoes with herbs, okra and summer squash for dinner.  I'm thinking it's a perfect summer homestead dinner.

We have gone from dry to too wet. I am going to check behind me ears for mushrooms.

Isn't that the truth. Sure wish I knew which ones were edible.

I'd probably want to study mushrooms for a good ten years before I ate one .. except morels.

I've taken a class, Mrs. Mac, and have harvested and eaten puffballs from here before, but that's as far as I've ventured. So many varieties on this land, but I've yet to see a morel!

I haven't seen a chipmunk since moving here 8 years ago, I thought maybe they weren't native to NC! They are everywhere in NH and loved to eat the roots of my hostas.
I am have no knowledge of wild mushrooms. Yesterday a friend gave us a package of "hen of the woods" mushrooms that she foraged and froze with butter. I am anxious to give them a try.

Oh, I bet those mushrooms will be good, Michele. Nice gift! The squirrels are definitely more plentiful, but there are chipmunks here too.