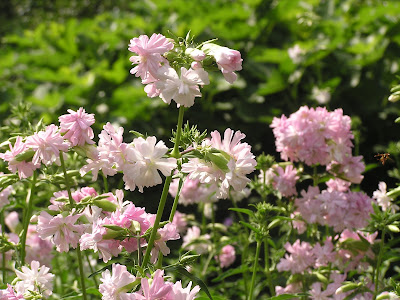 Hello, friends.  Well, I was wrong again, about there being woolly aphids on the roses and raspberries.  It's actually flatid planthoppers, and this time I'm sure of it.   I suppose that's why the insecticidal soap doesn't seem to be doing much.  I've noticed them before, but apparently never ID'd them correctly.  I'm glad the third time's a charm.  Though the article says they don't cause much damage, it does seem as though they're harming the plants, with the branches beyond them drying up, even the wild ones I see on my walks. That doesn't seem negligible to me.  After several weeks of no rain, we had a lovely overnight rain, and everything perked up.  Since then, it's turned hot and dry again. 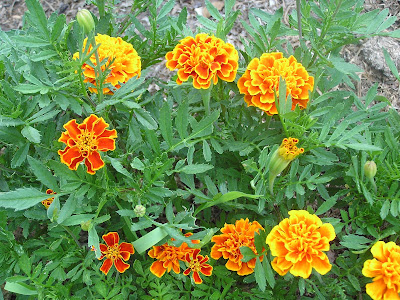 I made a Lowe's purchase for our online business with my cc, for 5% off, and will pay it off immediately.  I found a marked down Heritage raspberry for $8 while there, and purchased it.  All the others were marked $15 (1/2 price), but this was the nicest of the bunch, so I'm pretty happy.  With the above mentioned planthoppers, I've barely gotten any raspberries so far.  J & I planted this one in another location, shortly before a rain.  I spent an hour one morning harvesting all the blueberries and blackberries I could find, which netted me about 1/2 cup.  It's a good thing I enjoy this lifestyle, and also that there are grocery stores, and we're not having to live off of what we can harvest!  It is the beginning of the season here, so I'm hopeful for a better harvest.  On the other hand, I can and do collect dozens of Japanese beetles in an hour.  Oh, the life of a gardener. 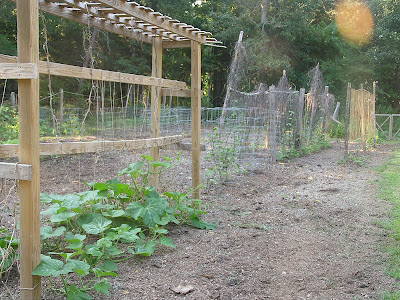 I listed several items on ebay.  Our three surviving olives were mulched, and beets were weeded.  The stencils arrived, so I etched both of the light shades, only to realize the etching is not enough of a barrier for the bulbs, as it still is quite glaring.  I chose tree stencils, being the lights have metal that looks like branches as supports.  My next plan is to purchase frosted glass spray paint to cover the insides of the shades.  J doesn't think it will wash off like the original paint did.  Fingers crossed.  One night, he requested a pasta salad, which included one of our cucumbers, recanned olives, and our basil and oregano.  I took advantage of a 40% off sale, and bought 5 gifts for 3 people.  I suppose that means I've begun my Christmas shopping.  On Friday, I harvested lettuce, cucumbers, blackberries and blueberries.  I weeded the carrot bed, filled a bucket of weeds for the chickens, and gathered lambs quarter for us.  Cucumbers are a good cool treat for the chickens when the days get hot.  I cut them in half, and place them in their yard.  J suggested I try freezing them, which I did after halving them.  They seem to enjoy pecking at them and getting the cold bits.  I'd intended to harvest all my lavender before the beach trip, but only got around to one plant.  Though the other two's flowers were a bit past their prime when I harvested them, they still smell lovely. 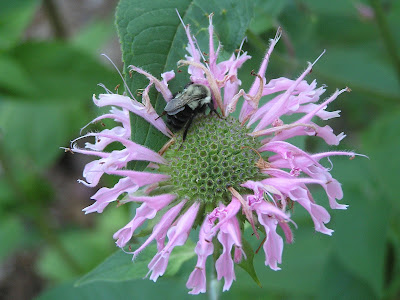 After removing the lambs quarter leaves from the stems, I added the stems to the broth bag.  It hadn't occurred to me until recently to do this.  I gathered some thyme to dry for winter use.  Salad were made with our lettuce and cucumbers.  Eggplant parmesan was made with eggplant slices I froze last year.  That's the first time I tried freezing slices, and I must say we thought it was delicious, so I'll be doing it again, provided there's freezer room.  There were two cool nights, when we were able to open windows.  I've mentioned that we built an outdoor shower, as we won't have one when we get to that stage of the bathroom redo.  I tried it out this week, and loved it.  The first time, it was at night, almost dark.  I'd hung solar twinkly lights around it, which we already had.  Looking up into the trees, and seeing lightning bugs flicker nearby was pretty magical.  The next time was during the day.  Looking up through the trees to see the blue sky with puffy white clouds, and hearing the birdsong was also pretty special. 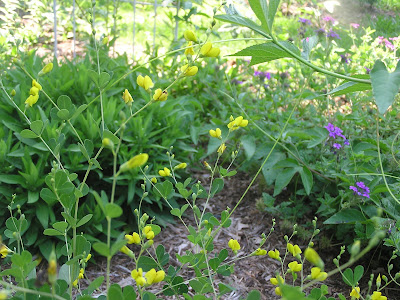 I've used the toaster oven to bake a couple of times this week, to cut down on heat in the house.  There have been a couple of frugal fails.  I had one last large pumpkin in storage that was gifted to us.  As the gardener who gave it isn't organic, I was saving it for a hot day for the chickens,like right about now.  Well, I waited too long, so into the compost it went.  The Olympus camera I've used the entire time I've had my online soap shop (10+ years) was a used one gifted to me by M.  It still works great, but it's not supported by Windows 10, so I've been having all sorts of wonky things happening, lately closing the page when I try to download pics.  After some research, I contacted the company, who told me one fix is to use a photo card reader.  Heeding the tech guru of the house, I purchased a reader, which turns out to be the wrong one.  I tried cancelling my order, but couldn't in time.  I've purchased the correct one, which should be here 4 days before the wrong one, so there's that at least.  I have at least 30 photos on the camera to download, including some of the outdoor shower, but we'll have to make do with some other recent photos. 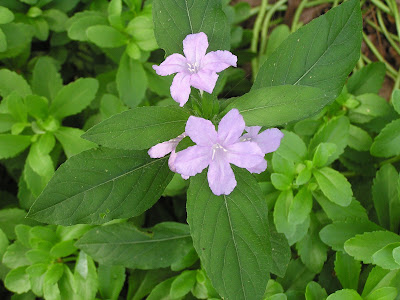 We haven't quite gotten back into our milk buying groove since the beach, and we're running low.  I made up some powdered milk to mix with liquid milk to make yogurt.  Last week, I saw mention of Brandy's mushroom & cheese crepes.  Having some baby bella mushrooms that I needed to finish using up, I decided to make crepes for dinner on Saturday.  I mixed up powdered milk for the crepes, used our eggs, and gathered oregano, parsley and thyme to add to the mushrooms and cheese.  They were good, though the crepes were a bit thick.  I left out the remaining batter Saturday night, after researching that is often how the French do it.  We had a small amount of ricotta and some sour cream that needed using.  I added vanilla and a small amount of honey to each, spread that on the crepes, then added our blueberries and blackberries for Sunday breakfast.  J liked the ricotta ones best, and I thought they were both good.  I added some milk to the batter, and the crepes were much thinner, and just right.  I can see how it would be a great way to use up leftovers.  You could even add different bits of leftovers to each one, if you just had small amounts.  I think I may add crepes to our repertoire. 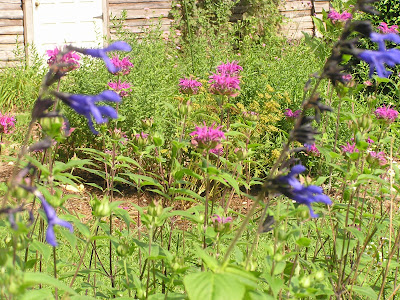 My pantry always has various concoctions "working" in jars.  I strained two jars of vanilla.  One was good as is, and I added three vanilla beans to the other jar and put it back on the shelf.  I also strained two jars of citrus cleaning vinegar, and a small batch of yellow dock and dandelion root tincture to add to the medicine cabinet.  It has been very hot and humid, and I am feeling very thankful for a/c each time I come back in from my outdoor ventures.  Sending many good wishes for a lovely week and 4th of July holiday!

Mmmmmmmmm!!! Mushrooms and cheese crepes! Your family must be in heaven all the time at your homestead. Garden pictures are beautiful, and how I wish we had lightning bugs here! Alas, too hot and too dry...

Happy 4th to you and yours, Laurie!

Your outdoor shower sounds wonderful! A great idea to have it ready for when you do your bathroom remodel.

Well, it was a bit of a stretch to get him to eat crepes, Nancy! He's a big guy (6'2"), and has a big appetite. But he did think they were pretty tasty in the end. Of course, there were sides, but I don't think he was quite sure about them at first.

I'm loving the outdoor shower, Michele! We've already started on the remodel, and there's talk of taking the tub out very soon.

Hi Laurie, beautiful blog you have. I just ordered a few bars of your rose soap on Etsy. I found you through Lesley Austin’s Wild Simplicity. Looking forward to trying your soap, I’ve been searching for rose soap and yours sounds lovely.
Kind regards,
Laurie

Laurie, thanks so much for your order and your kind comments. I hope you are pleased with your soap!