Crunchy From Way Back & Frugal Accomplishments 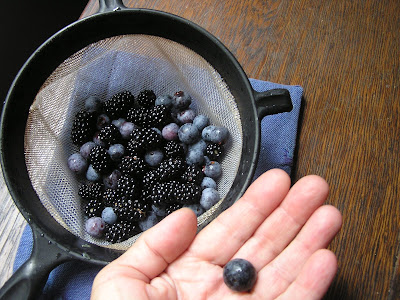 Hello, friends.  Last week, I spray painted the two lamp shades with frosted paint.  J hung them, and I again have working shades in my studio.  J created a new item for our online shop. I took photos and created the listing.  My ebay items didn't sell, so I dropped the price and relisted them.  Laundry was done with homemade soap, and hung on the line.  I met my initial swagbucks goal several days, and made a purchase through them for our bathroom redo, earning 4% back.  The item was marked half price, for damage to the package and possible scratches, but the item arrived in perfect condition.  I'm happy about that.  A library book was renewed online the day it was due, saving fees.  Walks with the pups were taken twice a day, getting exercise, relaxation, and keeping my weight close to where I'd like it to be.  A summer tanager sang to us from a tree one day. 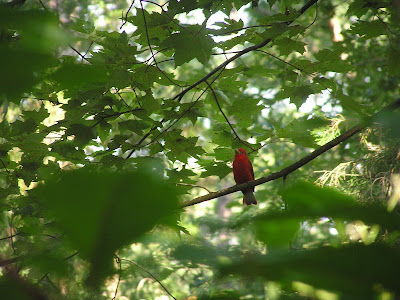 On the Fourth, we dug all the potatoes whose tops had died back.  J was disappointed with the harvest, but I was pretty happy.  I'll weigh it, but it looks like there are at least 20#, which is what we planted.  There's about 1/3 of the patch left to harvest, plus another patch planted from the tiniest of the potatoes we grew last year.  We'll harvest them before long, as the fire ants will enjoy the most of them if we don't.  Less than ideal, but at least we've got some homegrown potatoes to enjoy, even if we won't have any for winter storage.  J grilled, and I prepped some of the potatoes with our herbs.  He and M enjoyed baby back ribs that had been marked down from $19 to $4 and change for the 4th.  Our lettuce and cucumbers went into a salad, and store bought corn on the grill was enjoyed as well.  I considered making one of the flag desserts I saw during the week, as we had homegrown blueberries, as well as strawberries, cherries and watermelon.  I picked up a bag of vegan marshmallows on markdown at the local natural food store too, but in the end, we were all too stuffed.  Here's a pic of the outdoor shower.  That's one of our cisterns in the background. 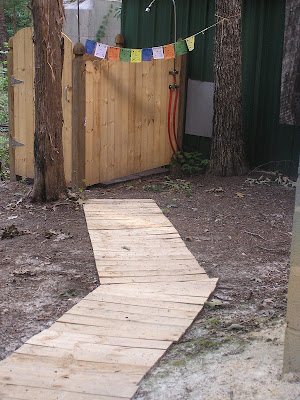 When J was going to town, I asked him to stop by Tractor Supply for animal food, and gave him a 10% off coupon to use that came in the mail. Now we're stocked up with dog, cat, chicken and bird food.  I sold a dozen eggs to a friend, and sent some cucumbers with her.  I also gave the mail carrier and a neighbor cucumbers.  The dogs, chickens and we are eating them every day, in some form.  Another day, we gave our hair dresser and J's business partner cucumbers.  I realized though I have plenty of dill pickles and dill relish on the shelf, I could use some sweet pickle relish.  This can be used in Thousand Island dressing, which has been my favorite for years.  In fact, in the afternoons when I got home in high school, my favorite snack for some time was a salad with fresh made Thousand Island.  I wasn't a vegetarian at that point, but apparently I had some crunchy leanings, to prefer a salad as an after school snack :o).  This week, I made up a batch of the relish, and for a brief window of time, had one cucumber remaining in the crisper, until that days pickings, which added another 21.  They're certainly bountiful! 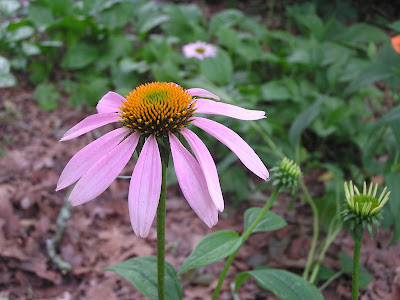 On another day, I made potato salad with more of the potatoes that got cut during harvest, which also used our parsley.  On Friday, J & I went to hear live music, and took a neighbor along.  There was nothing frugal about it, but I consider music one of life's pleasures, and worth the cost.   Here's one of my favorites of his songs, which does have a frugal theme, though sadly he did not sing it that night.  On Saturday, I tried a new soup recipe, which included a gifted large zucchini, our first tromboncino, our basil, potatoes,  parsley and a jar of homemade broth.  The soup is called Burden soup, related to the burden you feel to use up large zucchinis.  I'll be making it again.  I made a salad using our lettuce and cucumber, plus store bought items to go along, and cut up and sweetened strawberries that needed to be eaten for dessert.  The coming week looks to be a busy one, with 4 days of working away from home.  I was glad to get through a pile of magazines.  Some will be going to the free basket at the library, and a couple were saved for a friend.  I also whittled down a pile of papers at the computer.  The pile is not gone, but it's smaller.   Sadly, one of our roosters suddenly became unwell.  We've isolated him, and been giving him all the natural remedies we have, hoping he'll come around.  The cooler temps on Saturday allowed us to turn off the a/c and open windows.  It's been too long, and the fresh air is delightful. 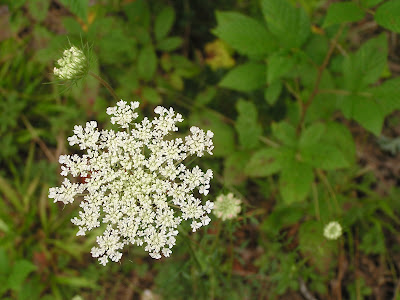 With the cooler temps, we were able to enjoy a pond sit one evening, and observed a bird catching insects at the pond.  It hovered at times, and we believe it to be a flycatcher.  Some dear friends have retired and are moving to Hawaii.  The wife is already there, and on Sunday I helped the husband by cleaning what was left in the kitchen and pantry. As he's leaving in two days, he told me to clean everything out of the fridge and cabinets.  I brought home a car full, including 2 lbs of butter, maple syrup, frozen meat and seafood, oils and balsamic vinegar and lots more, most of it organic.  He offered me their toaster, TV and DVD player.  I left the microwave, but our toaster, TV and DVD player are all having challenges, so they were most welcome.  There are also some lovely pottery bowls and mugs, and assorted kitchen items that came home with me.  I boxed up the rest, and he'll take it to a place at the local dump called the swap shop, where it will be free for the taking.  Someone will be happy to get that microwave.  When I arrived there, I heard a sound I couldn't quite identify, and began looking for a large bird in the trees.  It turns out they have two juvenile male turkeys they feed.  They were quite amusing.  Before I left, I noticed columbine and rose campion with lots of dried seed heads.  I gathered some of each, and hope they'll do well, bringing sweet memories of friends. 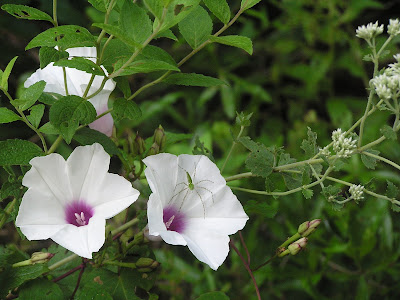 I sent a dozen eggs home with our neighbor.  Each time he grinds mixed grains for his cows, he offers us some for the chickens. J helps him often, to keep all his equipment running.  One day last week he dropped everything to go meet the neighbor in a field, then came home and quickly fabricated a piece to get him up and running again.  It's nice to be in a community where neighbors look out for each other.  It's been a long day.  I expect I'm forgetting things, but that'll do for now.  I hope your week brings you all manner of seasonal pleasures.

I loved the berries picture. M

Love all the pictures! But I really like the outdoor shower! We used to have friends who lived in the country and who had an outdoor shower...it's nice to shower outside early in the morning with the birds singing all around!

I'll have to try early morning, Nancy! I imagine it would be a lovely way to start the day.

You surely do have an abundance of cucumbers! Our zucchini finally seems like it will start producing. Our garden is definitely a couple of weeks behind yours.

Come by and get some cucumbers, Michele!