Hello, friends.  Though the garden is slowing down, I used all the small tomatoes I had along with some larger ones that needed using to make tomato relish, which I canned.  This recipe goes along with one for vegi fritters, which sounded like something good to try.  For dinner that night, I tried a new recipe for potato pie, which we enjoyed, and it used our chives and parsley.  We had leftover broccoli cheddar quinoa and asian cucumbers with it.  Several nights later, I made the vegi fritters, served with tomato relish.  Next time, I'd go with a small zucchini/tromboncino, or add another egg and possibly some more cheese to help them hold together better.  The recipe didn't specify, and I used a good amount of grated squash, because you know, there's always an abundance of squash.  I harvested kale, and tried a new salad recipe, which used one of our pears. 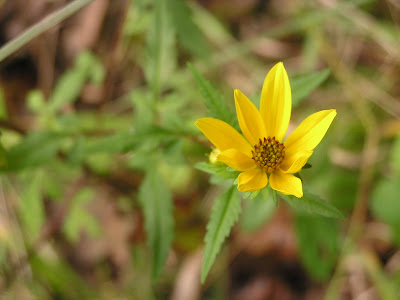 After working in town, I ran errands.  I tried a frugal idea, which didn't work out.  The last time I was at my bank, and requested deposit slips, I was charged $1 for a sheet of four.  My bank was bought out a few months ago, and this is the first time I've been charged.  It bothered me that I have to pay .25 every time I want to put my money in the bank.  J suggested I copy the deposit sheet at home, which I thought was a great idea.  Unfortunately, when I brought a slip to the bank today, I found out the slips use special ink, so I cannot use my home copied ones.  I inquired about ones they've said they can order to be sent to me, but found out they're even more expensive.  Crazy! 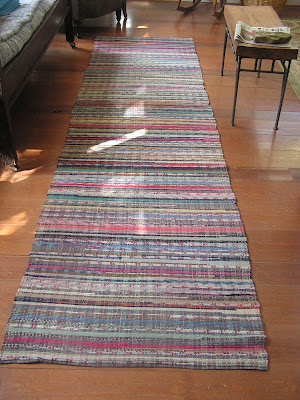 My parsley has reseeded and provided a multitude of volunteers in late summer the last few years, but it was so dry this summer, no volunteers germinated and the original plants are dried up.  While in town, I bought a parsley plant to tide me over.  I looked at the plant mark down racks, and bought two purple mums for .75 ea.  I picked two that had many buds, so they should flower well for some time.  J planted them at the head of our walkway.  Over Labor Day weekend, I noticed a pretty, vintage handmade rag runner for a great price.  As it was 10 1/2' long, I had to ponder if I had a good spot for it.  I decided it would work well in my studio, so that was the last stop on my way home.  They still had it, and I bought it for under $40.  I made vegi BLT's for dinner, using one of our large tomatoes.

The dye pot with the eucalyptus fabrics turned out a pretty peachy tan color.  I used dried silver dollar eucalyptus leaves that were in a bouquet given to me a year ago.  I believe fresh leaves would give a bright, vibrant orange.  In the class I took in July, the instructor used some freshly picked sunflower heads for one of our dye baths.  We removed the seeds and used them.  Thinking frugally, I thought I'd try the hulls at home from already spent seeds under our bird feeders.  They've been collecting there for quite some time.  I rinsed them and simmered them for an hour, then added fabric, but they had not imparted any color after a week's time.

I added alum to a small amount of the same dye bath, and did get a light beige from that.  Traditionally, a Hopi black sunflower was used for dyeing.  Though I buy black oil sunflower seeds for the birds, I very much doubt they are this variety.  It was worth a try. 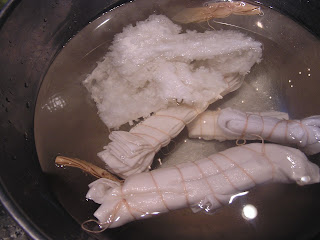 I tried folding some of the fabrics and wrapping them with string, in a shibori type experiment for this round.  I left the chenille fabric as is, but folded and tied the others.  You can see the results with the fabric from the sunflower with alum dye bath, and two from the eucalyptus dye bath. I took a quick look at a shibori photo online , then just did my own thing.  It will be fun to experiment more with the technique.  I'll report back on a short road trip next week.  Be well, friends.

that rug! looks like we need a day together soon.

Sounds good, Meredith! The rug came from the new little antique store in town. They have lots packed in there.

I'm echoing what has already been said--that rug! How GREAT!

Bradford Exchange is one place we've ordered checks and deposit slips online. I think the box of deposit slips was like $2.50 for 250...Check them out online.

I love that rag rug as well. It is a gorgeous one!

Thanks for that, Terri! I will definitely check them out.

I can't believe your bank charges for deposit slips! Some banks have done away with them altogether, hand them your ID and they just scan your checks for your deposit.

I will definitely check that out, Michele, though you think they'd have mentioned it if it was an option, when I was complaining :o).