Hello friends.  Well, we had another disappointment with the chickens.  No chicks hatched with this latest round of eggs either.  The two young roosters are still segregated from the flock, so I suppose it means our older rooster is not "taking care of" the girls.  He does have especially large spurs, and may not physically be able to, so we have been working on gradually shortening his spurs.  Oh well, at least we have the four bought Americauna chicks.  Most days, I'm getting 2 eggs from 9 hens, so we really do need some younger hens, to up the egg count.  I did laundry with homemade laundry soap, and hung it on the clothesline.  I do love the smell of sun dried sheets.  I spotted this caterpillar while at the clothesline.  Isn't it an interesting one?  I don't know what it is. Update: it is the about to pupate caterpillar of the White Blotched Heterocampa moth. 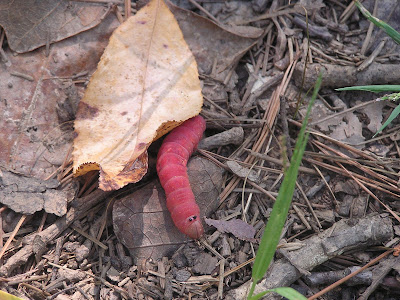 Though the temps were hot, 90 degrees, I managed to get the sweet potatoes weeded, and helped J gather firewood offered from a nearby site that had recently been timbered.  I did pull up a couple of plants while weeding, so have the first of the sweet potatoes curing.  J cleaned up the garden, and took down the remaining, sad cucumbers, as well as the tomatoes that were done.  He also harvested most of the Seminole pumpkins.  Okra and eggplant are still coming on strong, and a few tomatoes.  It looks like the squash are done.  Kale is doing great, lettuce is filling in, the cabbage and collards are doing well.  Soon, cooler temps are arriving.  Thank goodness for that.  I made kefir, yogurt and a batch of granola.  For a dinner, I made potato salad, asian cucumbers (the last of the season... sigh), and okra, using all homegrown vegi's and herbs.  Several bags of okra were frozen for future meals.

We had plans to be at the coast this week, but Maria strengthened back into a hurricane aimed at the NC coast, so we canceled.  We instead headed towards the mountains, and enjoyed a couple of nights in Boone.  The temps were delightfully cooler.  The B&B was a lovely, relaxing spot with a hot tub, which we enjoyed. We visited a free public garden, several thrift shops, an antique mall where I found a large vintage glass refrigerator dish (for less than any I found online when you include shipping), and a cheese plant and shop.  We missed the cheese making, but bought some lovely cheeses.  Instead of going out to dinner that night, we picked up a baguette, olives, fruit and a few other odds and ends to enjoy with the cheese, and had dinner on the large porch of the B&B.  Before our road trip, J changed my oil, checked all the belts and topped off the windshield wiper fluid. 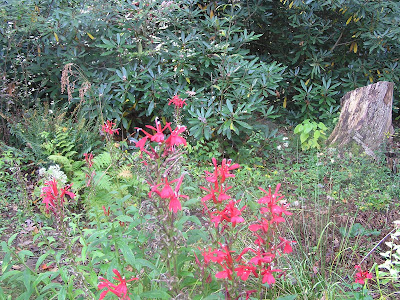 I began doing some fall cleaning, and so far have washed windows on two sides of the house and the two storm doors.  I've had paint for our main entrance door for a few months, and last week put three coats of chalk paint on it, in Boxwood green.  There are a few small spots that I must have missed getting the base coat on, as it's not adhering well there.  I sanded those spots, and will repaint them.  The propane bill was paid within 10 days, which gives me a discount.  Photos were ordered with a 40% coupon.  I've been wanting to create a wall of family photos, and these will finish up the photos needed.  I went through ebates for the purchase, so that will give another 4% off.  J planted a mix of fall greens, what a local seed store called Grandpa's salad mix. Sadly, the seed store closed last year, but he went to another one while working in that town, and had them mix up a close approximation, a mix of mustards, kales, turnips, rape/canola seeds and a purple collard.  We love to eat the greens raw in a salad.  I made eggplant parmesan with our eggplant, tomatoes, garlic and herbs, and an apple cake with our apples.  It's lovely that fall is here!

We are enjoying fall coming on here too. One final (we hope) spurt of hot weather last week early, then it broke. Watching the season turn...but no big red caterpillars here!

It's been so dry here that leaves are turning brown, but not much color otherwise. There's a chance of rain today and a few more days, so I'm hoping.