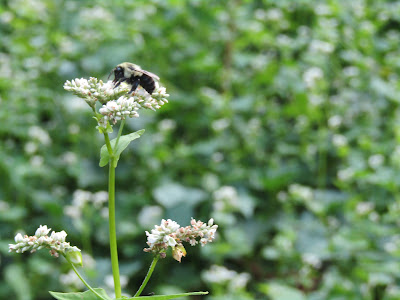 Hello, friends.  Our buckwheat plots are buzzing with many pollinators, a lovely sight to see.  Last week, I found a recipe for vegan GF zucchini bread, and made a loaf with the tromboncino squash.  I picked it because it had many 5 star reviews, and it didn't disappoint.  I'll definitely make it again.  I finally found a GF loaf bread I liked.  I'd been unable to find one that was recommended, but saw Rudy's Sourdough in the freezer at Harris Teeter.  It's the first one that doesn't feel like I'm eating a sponge, and tastes good too.  I'm happy about that!  I harvested carrots, tomatoes, cucumbers, tromboncino, eggplant, a beet, yellow squash, blueberries, apples, figs and pears.  I planted a third variety of collards J wanted. 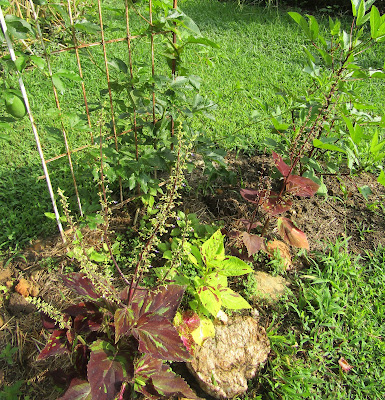 In a green salad, I used our figs and blueberries, and toasted some pecans.  I use honey and lemon juice for my dressing.  I requested books that were all at other libraries in the county to be picked up at my local branch.  A new baked dish was made, using our yellow squash, tromboncino and tomatoes.  It was good, but we agreed to try adding onion next time.  I added onion to the leftovers, and we thought it improved it nicely.  I made a vegan form of parmesan cheese, which is surprisingly good.  Not cheese exactly, but very salty and savory.  Tomatoes and tomato juice were canned. 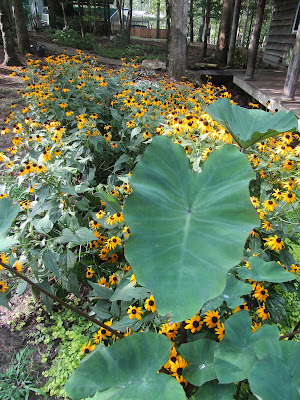 Upon researching, we've decided we've got Modern English Game Bantams.  Interestingly, they have different legs... one has green and the other has yellow legs, as well as different coloration of feathers, so they're apparently not even the same breed.  We incorporated them into the main flock last week, and they're settling in well.  I was worried about them being so small, but they're fast, so can move out of the way quickly when it's needed.  It's the first time in a couple of years that we've had everyone in one coop, which cuts down on my chore time a bit.  I foraged chanterelle mushrooms and lambs quarter, and used the chanterelles, tomato, lambs quarter, and onion in a veggie scramble.  I cleaned my cutting board with lemon peels, after using it for lemon water.

There was a good article on using tromboncino as animal feed.  We'll try growing some out this year for that purpose.  We think there are much better tasting winter squash, but we'll grow them for the chickens winter mash.  I crushed a pan of egg shells, and placed them around the pepper, eggplant, and tomato plants.   It looks like that's allowing the peppers to grow to maturity.  Tomato plants that grew outside the cage while I wasn't looking were tied up with garden twine, as well as the staked eggplants.  A new eggplant recipe was tried, which was OK, but not a keeper.  I printed a few more to try.  Figs were harvested, halved, and frozen. 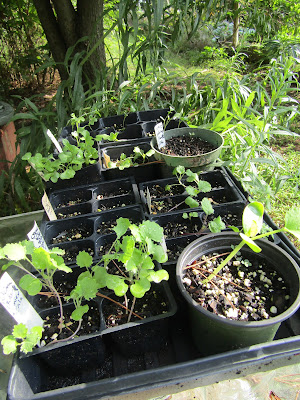 I picked up honey I bartered my time for, and tried to buy a lidded jar there, to replace my broken sugar jar, but she kindly gifted it to me.  I shared cucumbers and tromboncino squash with her.  Though it wasn't a need, I found a lovely simple natural linen dress marked down at Marshall's for $20.  It's the sort of piece one can layer over different pieces.  I picked up books at the library.  At the grocery store, I found our dogfood on sale for $7.30 off per bag, and lemons for $2 off per bag, and got two of both.  None of our cabbage sprouted, so J replanted it, as well as more carrots and beets, and a few more collards.  A lovely fern had come up along our walking path.  Not wanting to mow it, I transplanted it to the shade garden. 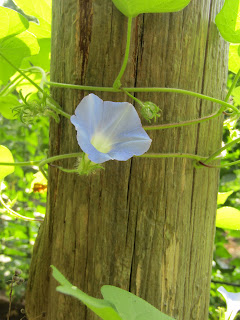 There were challenges on the homestead last week.  There was an abundant harvest, a nice increase in sales in my soap shop, as well as several sales in our metal home goods shop, all good.  The bad included the squirrels finding our hazelnuts, which was just a matter of time.  They also ate every last one of our peaches.  I checked them a couple of days earlier, and they were still hard as rocks, but by Saturday, the peaches were all gone, and they continue stealing the apples and pears.  Our pond lettuce experiment was a fail.  The lettuce never germinated, and the set up got under our floating dock, so when J went to check on it, the styrofoam cracked under his weight.  He used the neighbor's backhoe to remove a stump, so he could more easily mow around a persimmon, and in the process, lost track of and demolished the persimmon.  Oops!  The June bugs have been eating a large amount of our figs as they ripen.  While helping me pick figs on the tallest branches, J got stung by a wasp, to which he's allergic.  Thankfully, no epipen was needed, though his hand was painful, and now itchy and swollen..  Ah well, life is always interesting on the homestead.  Here's to a bit more ease in the coming week.

Oooh, sorry to hear about all the difficulties this week! Thankful that your hubby is okay.

Those squirrels sure do a lot of damage after we've worked so hard to tend to our crops. They can be frustrating.

Sounds like you got some good bargains.
Hope you have been enjoying this beautiful, steady rain.

The squirrels sure do! I found a lot more hazelnut shells on the ground this morning. Grrr... There's not been steady rain here, but there's been rain. So thankful for it! Have a beautiful week!

Oh gosh - you've had a bit of a rough patch for sure. Happy to hear your husband is ok. I'm sure that was a bit scary. Also happy to hear that the sales in your 2 shops have picked up. It's such an interesting time and we've found not as predictable as it has been years past.

What a bummer about the lettuce! It sounds like you are foraging and harvesting quite a nice amount of fruit and veg although it's too bad the squirrels seem to be harvesting as much or more than you are. Squirrels and chipmunks.....you can't keep them out and once they get something they like they obsess over what's remaining.

I began using the honey and lemon combo for salads after you last mentioned it and it's delicious!

We'll be introducing our pullets to the full flock in a couple of weeks. I can't wait - it will make my chicken chores much easier. The flock hasn't received newbies in years so this should be interesting...

Wishing you a week of garden abundance!

I'm happy you like the lemon and honey dressing. I haven't tired of it in 18 months, though I still want to try subbing maple syrup for the honey. I imagine it will be delicious, though probably a bit more pricy. Yes, it's been an interesting time for small businesses, hasn't it? Squirrels... grrrr. It is so nice to have all the chickens in one spot. Wishing you an easy mingling of yours. Have a lovely week!