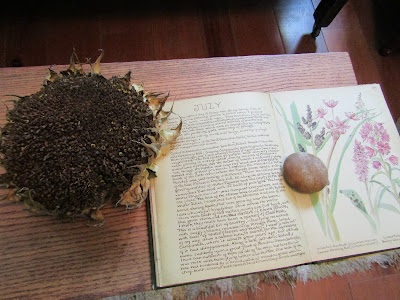 Hello, friends.  How have you been doing these July days?  Last week, I planted seeds of beets, cabbage, kale, broccoli, and collards.  The beets were direct sown, and were Detroit Dark Red and Cylindra.  The others were started in pots, and were Russian Red, Premier, and Dwarf Siberian kale, Early Jersey Wakefield and a mystery cabbage, Green Glaze and Vates collards, and Green Goliath broccoli.  The lettuce planted in the pond last weekend was Salad Bowl and Dark Red Lollo Rossa.  I received free packs of sample HP papers, thanks to someone sharing on The Prudent Homemaker.  While using a $3 off $20 produce coupon, I found organic peaches for $2.49/2# (usually $3.99), and found cherries at another store for $3.99/#.  Some of the peaches were frozen for future smoothies.  We've had some nice, large tomatoes, including this whopper that weighed 1# 11 oz. 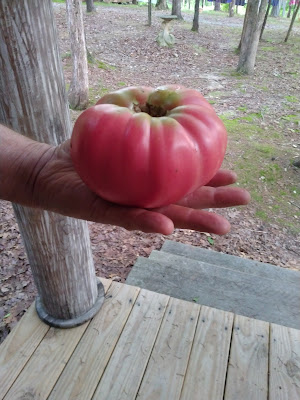 I decided to plant a few more potatoes, using ones that had worked their way above the ground before harvesting, and had started to grow little leaves, as well as ones starting to sprout.  I'm doing this as I come across them when gathering for dinner.  I wish I'd thought of it before we covered them up in their storage spot, but I saw mention where there was still time to get a harvest, even if only small potatoes.  We love potatoes, and more can only be a good thing.  Water from washing lettuce was used to water plants.  A bin of shredded paper was emptied into the compost.  The pups were bathed in the outdoor shower with homemade dog soap.  Their beds were washed, and dried on the line.  I sold a set of antique dishes for my friends on ebay.  There have been lots of apple and pear drops, so I've been gathering many of them.  Some of the damaged apples have been chopped for the pups and chickens.  I'm thinking of making a batch of applesauce with them.  No sign yet of the pond lettuce germinating, but soon I hope. 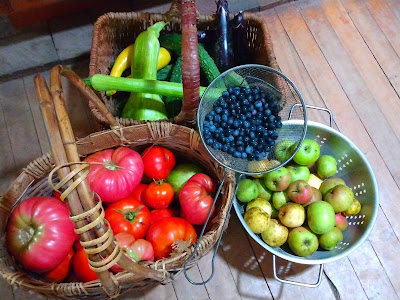 Eggplant, stewed tomatoes and tomato juice were canned last week.  I made soap using the stove for the first time this year.  Sales have been slow, so I hadn't made any since April, when the woodstove was still going occasionally.  Thankfully, sales are picking up a bit.  Last week, I harvested cucumbers, yellow squash, eggplant, tromboncino, tomatoes, basil, blueberries, and green beans.  I went through Swagbucks for a purchase, which will give me $5 cash back, used a $12 reward, and will get another 10% back in rewards.  I mended a small hole in the watering can with epoxy.  The carrots and beets have started coming up, and quite a few kale, collards and broccoli are up, as well as another cucumber.  The first two chanterelles were gathered, and used in a veggie scramble. 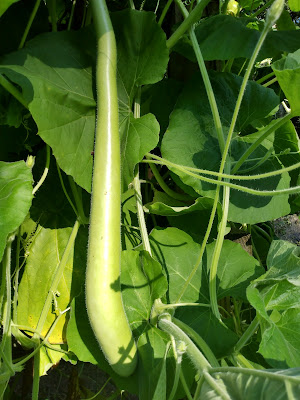 The first two cucuzza squash were harvested.  I checked in with my Sicilian family, and they recommended making pasta with tenerumi and cucuzza.  I watched the video as well on YT, and found out, traditionally the beans inside larger green beans would have been used, but this was changed to black eyed peas in the US, in this particular recipe at least.  I found one large green bean with five beans inside today, so I threw it in, along with the homegrown canned peas.  I figured out what was making holes in our peppers, and causing them to drop off... slugs.  We have a bottle of beer we were given that we don't care for, so it will be used as slug bait.  I may also crush egg shells, and place them around the plant.  I'd love to harvest some peppers.  We're grateful for the good rain we had last week, and are hoping for more this week.    Wishing you a lovely week.

We are doing our best to avoid the heat of the day outside. Fortunately, the days are getting shorter, so it won't be much longer to deal with.

You are harvesting quite a bit! Even the dogs benefit from your garden. We do feed some of it to our chooks, so nothing goes to waste.

I still have yet to sow my cool weather crops. Hoping to get to that this week, since I have an extra day off from work.

Yes, come on rain! We'll take what we can get.
Be Blissed!

What a beautiful harvest. And that tomato!

I planted our fall crops as well and did not plant another round of potatoes. But I should have. I've never tried growing 2 crops but, as you said, I bet I could at least get small potatoes. We love any potato so it would be worth it. Next year I'm going to give it a try.

Happy to hear you had a nice rain. It certainly helps. Also happy to hear that your soap sales are picking up.

I was able to pick up peaches and nectarines last week for $1.99/# and they were so good that I ended up picking up a few more this week although the price was up a bit at $2.49/#. The peaches last week were freestone and I wish I'd gone back to get more for canning.

That's a bummer about the slugs. Hoping you receive a nice amount of peppers once you put the slug baits out.

Chickens are wonderful, to help use some of the extra or less desirable produce! Here's hoping for rain for both of us.

The first peaches I got were also wonderful, but the second round weren't quite as nice. I'll be interested in seeing how the potatoes do. So far, I only have 5 plants, but if that makes another 5#, that'd be great. The soap batches make 18 bars, which can take a while to go through when things are slow. I hope you have bountiful fall crops.

I grow the green glaze collards and you will like them. The leaves are shiny and look interesting in salads. Cabbage worms don't like them much but they will eat them. Flea beetles devour them so watch out. I only grow them in the fall because the beetles are so bad in the spring and summer.
Last year I had some peppers with holes in them and never figured out what did it. Slugs make sense now that you mention it. I didn't consider them because I couldn't believe anything would want a pepper.
Jeannie@GetMeToTheCountry

Looking forward to collard season! The first peppers I checked only had spiders inside, but I knew they weren't making the holes. Then I found the culprit. Always something!

This spring I purchased some slug poison pellets but didn't use them because a rat found the bag in the shed and ate it. It wasn't even hurt.