Eating From the Garden & Putting Food By 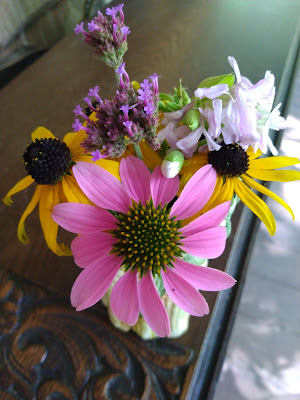 Hello, friends.  Last week, a small bouquet was cut, to enjoy in the house.  I dehydrated tomato tops, which will be turned into powder, once more are collected.  I harvested basil, and made pesto.  Sweet potato and a few buckwheat leaves were gathered, and added to smoothies.  I harvested spilanthes, lemon verbena, thyme and stevia, and dried them.  From the garden, we harvested tomatoes, cucumbers, eggplant, yellow, cucuzza and tromboncino squash, butternut and other winter squash, green beans, cantaloupe, honeydew, apples, figs, and pawpaws.  Apple Cinnamon Zucchini muffins were made with tromboncino.  I made them GF and vegan, and they turned out well.  A bread end was dried for bread crumbs. 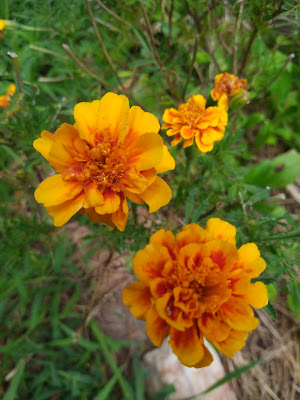 Twice the past week, I saw mention of making cabbage steaks.  Having our cabbage that needed to be used, I tried it for dinner one night.  We thought it was pretty good, though I'm sure real butter would make it better.  Another new dish was tried, using our eggplant, tomatoes, broth, basil and garlic.  I'll be making it again.  While the cabbage was baking, sweet potatoes were added to the oven.  By deferring shipping on some amazon items, I've got $4.50 in digital credit, which will be used for either books or movies.  After a soap delivery, I went by Dollar Tree, and picked up parchment paper, scissors, wax paper, gift wrap, tissues, and a few more packets of seeds for my Garden sets.   I was happy I'd purchased scissors, as my kitchen & garden pair broke at the handle over the weekend. 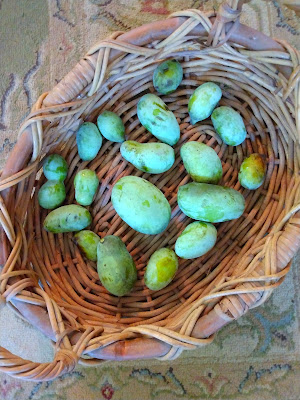 Are you aware of the difference in ingredients the major food corporations put in US foods vs the UK's?  Just another reason to grow as much of your food as possible, and cook from scratch.  I canned another round of tomato paste, ending up with another pint.  Though we've been having cantaloupe pretty much every day, and have shared some, we still weren't keeping up.  I researched, and tried dehydrating some, and made salted cantaloupe jam, which is actually pretty good.  We're not so sure about the dehydrated melon, or how we'd use it.  Our garlic, rosemary and homemade broth were used in soup.  As I can't have mayonnaise, (no eggs or vinegar), I needed to figure out how I could have a tomato sandwich.  Mashed avocado on one slice of GF bread works well, and some basil and salt added makes it yummy. 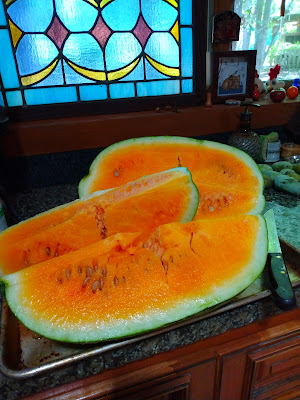 August has always felt like damage control around here, taking care of the produce that most needs attention on any given day.  Eggplant and squash needed using, so I tried a new recipe for cucuzza squash, which also used our tomatoes, onions, garlic and herbs, and made eggplant in plum sauce, using our garlic, herbs, and plum sauce made previously from our plums.  All laundry was dried on the line.  Just about every day, we're picking cow peas, and shelling them.  I cut our first honeydew, and it was sadly a long way from being ripe.  J found one cracked another day, which was ripe.  It's hard to find that happy medium.  I cut a watermelon that was found chewed off the vine, a lovely yellow one, which was thankfully nice and ripe. 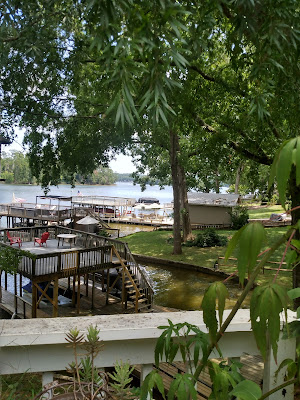 Dear friends invited us to their lake house, for some very needed down time on Sunday.  Once we got all the things done on the homestead, we headed in that direction to spend time with old friends, eat well, and soak up the sunshine.  Cucumber salad and cantaloupes were brought to share.  Now, we can get back to it, with a refreshed spirit.  We're having a rainy morning, which I'm delighting in, rare as they are these days.  Wishing you a most lovely week, friends.

So glad to hear you are having many successes with new recipes! That orange melon looks scrumptious! How about trying pesto on your tomato sandwich? Two great sources for vegan recipes are Minimalist Baker and My Quiet Kitchen.

I know about the difference in the food in the UK and here. They just don't allow all of the garbage that we do. I've often found it curious when hearing about folks with gluten allergies going abroad, and being able to eat regular bread. Oh, how far we have to go.

Your little getaway sounds marvelous! Sometimes all you need is a quick recharge to get back at it with gusto!

Pesto is a great idea, especially when I don't have avocados! Thank you! Yes, I'd heard that about people being able to eat bread in Europe, the difference seemingly being the glyphosate we allow on everything here. It really is insane. I feel like more and more people are waking up every day, so maybe there's hope yet.

What a beautiful bouquet! I love bringing flowers from the yard inside, as long as I can keep the cat away from them.

You're harvesting such a variety of things! I actually can't eat honeydew or cantaloupe, but my husband loves both and I make a cantaloupe jam from food in jars for him. It tastes similar to a creamsicle.

Yes, the ingredient difference between the countries is frustrating, but I think you're right. More people are waking up to the issues. Unfortunately, because of the monetary kickbacks, I don't think we'll ever see an end to the use of glyphosate, which is really concerning.

It sounds like you had a lovely time at your friend's home. So nice to have a day away. Wishing you a wonderful week ahead!

That's a beautiful watermelon and so yummy on a hot day! We love dehydrated cantaloupe; it's amazing a whole cantaloupe fits in a quart jar once it's all dehydrated!

Staci, I'll see if I can find the food in jars recipe. That sounds really good! I only eat melons separate from other food, but that may not make a difference for you.

Stacy, do you eat the cantaloupe as snacks, or use it in other ways?

Laurie - no, unfortunately, eating it separate won't make a difference for me. Cantaloupe and Honeydew give me a weird feeling in my throat - almost itchy. It's a potential indication of an allergic reaction so I just stay away from it. Fingers crossed this never happens with watermelon....