All About the Harvest 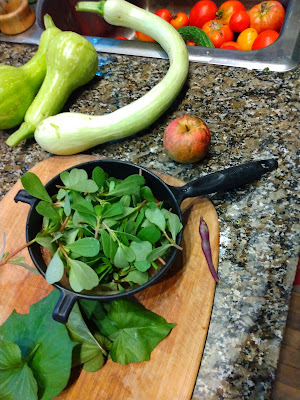 Hello, friends.  Last week was all about the harvest.  Tomatoes were cooked down for paste, which was my first time making it.  They simmered most of the day, as we don't grow paste tomatoes.  They ended up reducing from 18 pints down to 1 pint, plus a pint of tomato juice.  I then canned our carrots, which added six half pints to the pantry.  Four pans of figs were halved and frozen, and some were added to a smoothie, with banana and pineapple.  With leftover pasta, I made a salad and opened jar of caponata canned last summer.  Wheat and GF rolls were warmed for the caponata. I went through Rakuten for 10% back on an order, while the site had a 20% off sale.  Swagbucks is usually better, but this time, they were less than Rakuten, at only 6%.  I cooked using the toaster oven a couple of times, using solar power instead of propane with the regular oven. 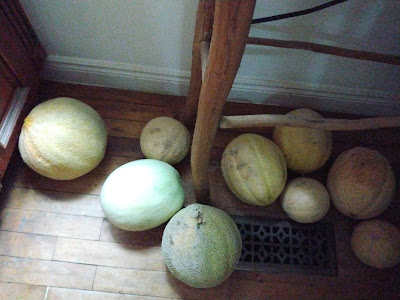 For a dinner, I made a pasta dish that used tromboncino, plus our onion, garlic and oregano.  I made a loaf of fig bread for J, using our eggs and figs.  Cucumbers were shared with our mail carrier, J's business partner, and friends, and tromboncino with friends.  The cantaloupes have started ripening, and the first honeydew was harvested.  While he was nearby, I asked J to return books to the library.  I dug around the recently planted potatoes to check on them, and found the slightest bit of growth on one, one had rotted, and the others hadn't done a thing.  I uncovered most of the soil off them, and as they hopefully grow, I'll replace the soil.  It was another very dry week, but thankfully on Saturday night, we got some good rain.  So very thankful for it.  Warm up water and water from washing lettuce was used to water plants. 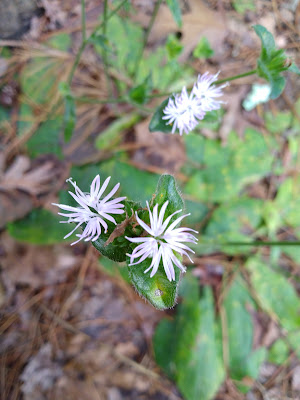 I cut up all the apples that had fallen on their own, or with the squirrel's help.  Though I have an apple peeler/slicer, it doesn't do well with fruit that isn't round or is soft, and they were pretty small as well, so it was a labor of love.  Though I never like to waste anything, it seems especially important this year.   I ended up with two gallon bags of slices.  Being it was dinnertime when I got to that point, I froze them, and will can them another day.  The squirrels have pretty much eaten all the hazelnuts, though the nuts were a long way from being ripe.  After an appointment, I found two canisters at a thrift store, of which at least one will be made into a compost crock.  The other is a handmade pottery piece, and I may keep it, though I haven't decided yet.  I received the 5% senior discount at the grocery store. 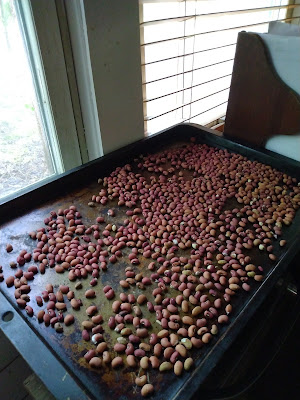 A potato and green bean salad was made on a day in the mid-90's with high humidity.  Neither of us wanted much more, so I made a green salad using our figs, and sliced some tomatoes to have with it.  When I filled up my car, I was very happy to see it had been 20 days since my last fill up.  All laundry was dried on the line.  I gathered seeds from the mizuna.  Though it wasn't my favorite, the chickens liked it just fine.  I've also gathered marigold seed heads.  The latest pest in the garden are leaf footed bugs on the tomatoes, which mostly just damage them cosmetically, though they can also cause tomatoes to drop.  The June bugs are eating a large amount of our figs.  Thankfully, there is plenty to go around this year.  J has sprayed with pyganic, an organic insecticide, to hopefully, cut down on their numbers next year.  Being surrounded by hay fields, their preferred habitat for laying eggs, it's challenging. 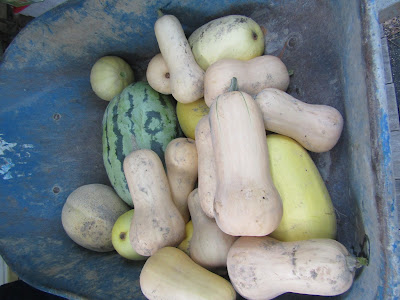 J tilled in the patch of buckwheat.  We were both sorry to, as there were so many pollinators enjoying it, but the purpose of planting it was to build the soil.  We were a little late, as there were already some seeds, so it's possible we'll have another round of it before frost, which will be just fine.  We enjoyed a night out with friends, for dinner and a concert.  The band are local folks that we've enjoyed seeing several times, pre-Covid, and tickets were reasonably priced.  I was excited to find the restaurant, as it was vegan, but found out the following day they were closing.  I'm glad I got to enjoy it.  A dish was made using our squash, tomatoes and onion.  J harvested watermelon, butternut squash, spaghetti squash, Iron & Clay cowpeas and lots of cantaloupes.  I planted several more potatoes, in hopes of a harvest before frost.  I'll probably leave it at that, as I expect I'm pretty much at the end of my window of opportunity.  I hope you're finding ways to put some food by, whether homegrown or purchased.

So glad you received some of that glorious rain! It does a body good, and a garden too!

Sounds like you are getting out and about. Too bad about the vegan restaurant. They are non-existent here, as most folks in this county seem to favor fast food. Ugh.

Enjoy your week, my friend!

It was the first time I've found a vegan restaurant around here (an hour away in Greensboro). Oh well. The rain was delightful! May we both get enough to nourish our gardens and bodies this week. Have a good one!

Too bad about the restaurant that you found is closing. My friend in Greensboro recommends Boba House on Tate St. in Greensboro. They do vegan, vegetarian, and gluten free.
We really need more rain! I don't want to see what our water bill will be this month, despite trying to be frugal.

I give you credit for making tomato paste. That can be a long process and not a lot of product in the end, compared to what you started with.

I didn't grow melons this year but have picked a few up at our farmers market and they have been incredibly sweet and tasty! It's the quintessential summer treat, isn't it? Speaking of food, fig bread sounds amazing!

It sounds like your squirrels will be well fed this winter with all of the "found" produce they're putting away.

Your weekly harvests sound delicious. So happy you received some good rain.

Thanks for the mention of Boba House. I'll check them out. It can be challenging to find a place that will please both vegans and carnivores. Yes on the rain! For a brief period last evening, the forecast said 80% chance, but we got the barest drizzle which never even wet our walk. I'm hoping for this evening.

That was an in interesting experience with the tomato paste. Some of the tomatoes starting to come on now are meatier varieties, so I'll try it again with more of those. The fig bread is one my Mom always made, and is pretty special. I will probably try a GF version soon. Squirrels!!!