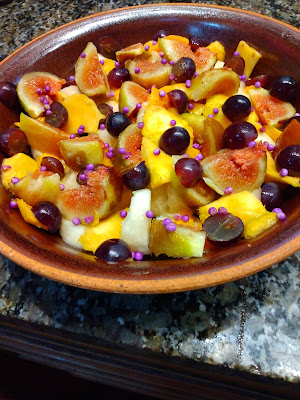 Hello, friends.  I hope your August has been going well.  Last week, I cut up our figs and pawpaws to use in fruit salad, and added beauty berries gathered on a walk to top it, adding nutrition and a little color.  Sweet potato pieces were fried.  Our cucumbers, pepper and tomatoes were used in a salad.  A book was returned to the library, and more were picked up.  When my sister was here learning to can, I gave her garden produce to take home.  She brought me a lovely homegrown bouquet.  My stepmom was visiting NC, and my sister, brother, SIL and I met her for lunch.  I brought produce to my SIL, and brought jars of tomatoes and tomato juice to my sister, which she had helped can.  While in Greensboro, I shopped at my co-op.  They had a sale on Southern Exposure Seed Exchange seeds for $2 ea., so I got three lettuce and a sweet pepper we haven't tried.  Pawpaws were prepped and frozen in 1/2 c amounts in muffin tins. 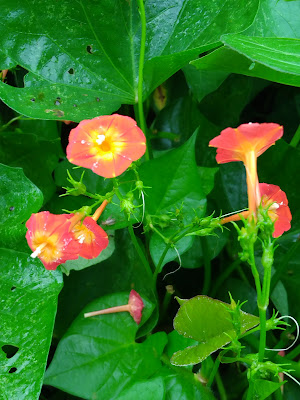 To use some of the bounty, fig bread and zucchini bread were made, the latter with tromboncino.  I blanched and froze some cowpeas, enough for three meals.  Figs were used in a green salad, with beauty berries sprinkled on top.  I gave the zucchini chips another try, hand cutting them thicker this time.  Two trays were prepared, just to try them, and the dehydrator was otherwise filled with onions.  You may remember some time ago I braided onions.  They're doing great, but that was only about half of them, and the round J dug a bit later sat on the drying rack for weeks, which didn't do them any favors.  Several of them, particularly white ones, had started to rot, so I salvaged what I could, and dried it for onion powder.  The latest squash chips ended up being too thick.  I plan to try at least once more.  Another round of pawpaws were prepped and frozen.  A local farm with a CSA had told us they wanted to buy some, but did not in the end, so I'm freezing them for future smoothies.  I redeemed Swagbucks points for a $25 gift card. 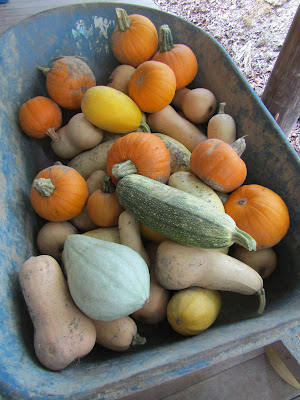 Between the tromboncino and cucuzza, the squash has gotten out of control.  I still have many canned quarts on the shelf, and early in the season, I canned up some pints.  I decided to make Burden soup with some, which uses up 2.2# at a go.  Still only a dent, but every bit helps.  On Friday, we gave away many squash.  Hooray!  I froze all the tomatoes, and will make tomato paste when there are enough to make it worth my while.  Laundry was dried on the line.  Some weeks back, I mentioned how much fun we had dancing at a gathering.  When we saw a local Inn was having a 70's dance party this past weekend, we decided to do it again.  We had a fun evening, the costumes were fantastic, and we were well taken care of for breakfast, despite all our quirky food challenges.  Garden produce was shared with our pet sitter when we arrived home.  Shortly before we left, J harvested most of the winter squash and pumpkins.  J harvested the last three cabbage.  One was used for dinner, and our yellow squash, onion and garlic in another dish.  Though not in the forecast, we received some lovely rain Sunday afternoon.  Wishing all in the US a happy Labor Day weekend!

Wow, that's a lot of produce! Glad you were able to share so much of it with others.

Your getaway sounds fun. And isn't it nice when special diets are considered by the host.

What a treat visiting with family.

I'm not sure if you're still having issues with your skin, but I've recently made a discovery for my own trouble with my hands. I believe the culprit is an overabundance of histamines. So all this picked veg and sauerkraut (among other things) has done me more harm than good. You might want to research it for yourself. I'm eliminating the things on the list for a month to see if I notice an improvement.

Have a fabulous week!

August is always a busy produce month and my goodness, you guys are certainly harvesting a lot! We've had ongoing issues with our paw paw trees and I think we'll be pulling them out and planting another type of fruit tree. Such a bummer.

Getting away and doing something fun is always a nice break. The 70's party sounds like fun! Happy to hear that it was.

Too bad about the zucchini chips, but hopefully you'll find the right thickness you're looking for. Nice save on the onions! I've had a few good saves this summer - I put things aside to deal with later and "later" becomes too many days. We've had a lot of humidity this past month and a half, so I have to remind myself to keep an eye on everything since that deteriorates it faster.

I'd never heard of Burden Soup and, although I'm allergic to dairy so I can't put the parm in, I think I'm going to try it. It sounds delicious! Maybe I'll add a little pesto if it needs something. Thank you for sharing that and the link - I'd never seen that website before either, so I'll take some time to explore it.

Daisy, it was a bit of a complicated conversation with the host about foods, but ended up OK. I know it's a challenge! My hands seem to be in a holding pattern, not getting worse, but never fully healing. I keep trying new things, to see if it will make a difference... upping the lemon water from 16 to 32 oz, upping the celery juice from 16 to 20 oz, and adding greens to the heavy metal detox smoothie. The MM info has fermented foods on the "No" list, so I cut them out last year. I hope the change helps you, and greatly appreciate you sharing anything you learn with me. I'm ready for this chapter to be behind me!

Staci, I also don't put parmesan in the Burden soup, as we can't have it. I do think parmesan always adds nice flavor (I'm Italian after all :o), but it's pretty good without it. A few weeks ago, I made a vegan parmesan cheese, which I sometimes add to dishes, when I want a bit more flavor. I like it better than any store bought vegan cheese I've tried. I'll be interested to know if you try it, and if you use pesto. I need to think of pesto more often!

Rereading my comment, I realized I wrote picked, not pickled veg, so just to let you know. Also, unfortunately, citrus is on the elimination list, so maybe your lemon water is keeping you from healing? I'll let you know how it goes with my new diet. Ugh. New diet. Again.

Yea, I thought that's what you meant. I hear you. It's a challenge.

Hi Laurie - I made the Burden Soup today. It's delicious!! I love the simplicity of it and plan to make more for the freezer. It had enough basil already in the soup, so I didn't add pesto. The only things I did different was that I caramelized the onion to add even more flavor and used veg stock instead of water. Next time I'll probably also add red lentils (I try to add them to almost everything for iron and protein). Thank you so much for sharing this!!

I also use veg stock in place of water. The lentils are a great idea!