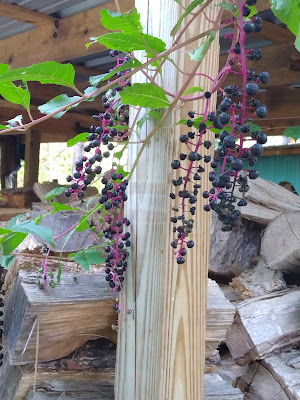 Hello friends, and happy September.  Last week, I planted lettuce and beets.  I had used pieces of roofing tin to cover the most recent round of carrots I planted, but found it got too hot, and dried the soil out, so I replaced it with cardboard.  I've seen just a few germinate, but every time I check, there are dozens of pill bugs and ants on the bed, so I don't have very high hopes that this round will go any better than the previous two plantings.  The beets are coming up nicely, as I started them in a pot.  Less than ideal, but this is round three for them too.  I started a batch of cat's claw glycerite.  Pawpaws, squash, cucumbers, watermelon, green beans and figs were shared with neighbors and others.  I  dehydrated more onions and cherry tomatoes.  At this point, many of the tomatoes are cracked, pecked, or partially eaten, so I started freezing them, to keep our kitchen less of a science experiment than it already is.  It may affect the flavor, but that's the best I can do this year, until I have a chance to preserve them.

For one dinner, I made apple beet salad, potato and green bean salad, and sliced tomatoes, all homegrown except for the apple.  I made an online food purchase using a 15% off coupon, and went through Swagbucks for an additional 4% cash back.  I prepped and froze 6+ lbs of pawpaw pulp.  We're looking into using it to make wine.  I gave the dogs baths in our outdoor shower with homemade soap.  Laundry was dried on the line.  We harvested cucumbers, cucuzza and tromboncino squash, tomatoes, cowpeas, green beans, sweet potato and buckwheat leaves for smoothies, apples, pears, some volunteer ground cherries, melons, figs, eggplant, lambs quarter and purslane.  For the first time ever, I gave up on harvesting something that's still producing.  The cucuzza have been very generous, and I typically harvest 2 or 3 a day.  One or less is enough for most recipes.  We've shared around 20 with others at this point, and some in the fridge have started going bad.  I had the realization that I really prefer tromboncino, so I will continue to harvest those as we need them.  The mature cucuzza may end up as winter feed for the chickens.  J got the fall seedlings planted, some store bought and others I started.  There are collards, cabbage, broccoli and kale. He also seeded some mixed winter greens. 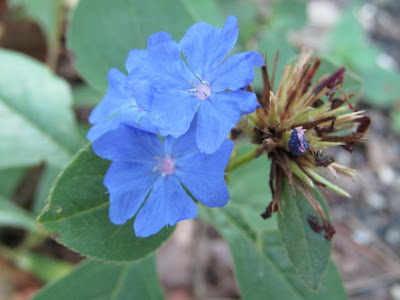 I explored our library website, and found out we now have the Libby app and Hoopla, which should greatly expand our e-book possibilities.  Eggplant was canned, and a triple batch of pesto was made.  The potatoes I planted for a late harvest were all a fail.  I only saw one that appeared to be making a stem, and there were a multitude of ants around it, so it never did anything.  There was a big oops moment for me this week, when I realized the bread I'd been using recently, the one I said was the only GF bread that didn't feel like I was eating a sponge, turns out not to be GF.  I know the first time I bought it, it had a GF shelf label, and amazingly, I never checked the ingredient list, which is unlike me.  No wonder it was so much better, lol.  When we were out for the day, I picked up an actual GF bread from the same brand, so we'll see how it is this week.  While I was harvesting the garden one morning, keeping me company was a hummingbird sipping nectar from the morning glories.  It was my birthday, and felt like a lovely thing, after finding that the Wordle word of the day was "inter", lol.  We had a little day trip, visiting Museum of the Cape Fear, which included a tour of the Victorian era house on site, which was free, though we made a donation.  We were a bit early for our restaurant, and stopped at two antique stores, but didn't find a thing we needed.  It was nice to get a little break, as we'll both be hard at work again on Labor Day.  I hope you've managed some down time, or will on Monday.  Blessings to you, friends.

Happy Birthday, Laurie! That magical bird was a wonderful gift on your special day.

Glad you were able to get your cold weather crops, I picked some up as well this weekend.
There is rain in the forecast, so hopefully, you'll get a good share of it!

Enjoy your week, my friend.

Happy birthday also. I enjoy reading all about your vegetables...the names just sound so lovely. No longer able to garden beyond pots on my little apt. porch, it's great to hear about yours. One pot needs to be thrown out, or at least the contents, an old gardenia with many ants and now some white stuff that might be fungus...so if I can save the pot I'll sterilize it before putting in new soil. So glad to hear from another area of NC...being in the mountains myself.

Thank you, Daisy! We've gotten some rain this evening!

Thank you, Barbara. I saw from your blog that you're in Black Mt. My SIL and I enjoyed some lovely meals there, and meandered to a few shops, on the way to and from Asheville last year.

Bummer about the potatoes and carrots. Hopefully you'll have better luck with the carrots this time. I started putting tomatoes in the freezer as well. As I try to keep up with everything else, at least they don't go bad, and I can use them to make something delicious later. Although I'm running out of freezer space...

It sounds like you're still harvesting quite a variety of food and the dinner you wrote about sounds delish!

I just found one potato sprout in the garden this morning, so maybe I'll get a few after all! I hear you on the freezer space... here too. It's a good problem to have!

I meant to wish you a Happy Birthday!!! No wonder we're kindred spirits!

Did you want me to send you some kajari melon seeds? They are finished drying. If so, email me at naturegurl1111@gmail.com.

Your photos are beautiful. Happy birthday.

Thanks so much, Daisy. I will email you.

Thank you, David. BTW, I purchased Compost Everything a few years ago, and it's been very helpful. Also, we started making easy biochar, thanks to you. Our original way was just too time and labor intensive to do often. So, thanks for that too.

So sorry your fall potato experiment isn't doing well. I was hoping you would be successful and could give me some tips. I had a few come up in the carrot row that I had missed when digging the spring crop up. They have been left to continue growing so I will see if anything comes of it. The leaves look good but that doesn't mean anything.
Jeannie@GetMeToTheCountry