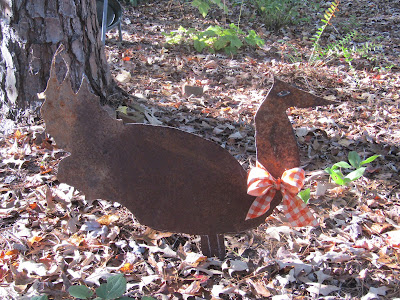 Hello, friends.  J had a piece of scrap left over from a job he thought looked like a turkey, so he did a little more with it, and we have another piece of yard art.   Though the garden has got "the dwindles", I've managed to harvest a pepper, tromboncino squash, lettuce, chard, figs, basil, oregano, a few cherry tomatoes, and black eyed peas.  I checked the tree where I found hen of the woods mushroom last year, and sure enough, there were three clumps.  I harvested two.  The first one was obviously older, but when I cut into it, it was quite buggy, so that one went to the compost.  The other was cut and dried, and I'll be making medicine from it.   With the lovely fall weather, I've been working on some outside chores.  More dog fennel was cut and placed in the chicken coop.  I worked an hour or so cleaning up the dog trot between outbuildings.  It needs lots more, but it's a start.  Things just seem to get placed there.  My potting bench is totally covered with stuff.  It's next on the list. 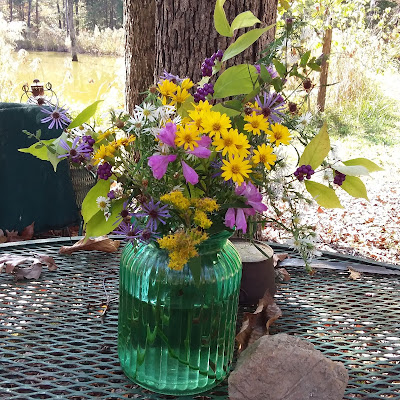 I tasted some of the limes that were fermenting, and realized I'm not a fan, so into the compost they went. A basket of black eyed peas were picked, along with a handful of butter peas.  Seeds from both were shared with a friend.  Before her visit, I gathered a bouquet for us to enjoy, while we sat at the pond.  I also gave her one of the Meyer lemon seedlings, among other things.  She gifted me a parsley and a celery plant, and other lovely things.  And she bought some soap.  I cleaned the nest boxes in the chicken coop, and cut more dog fennel to put in them.  It's the time of year to start the deep litter method, to keep them warmer through the cold months, so I'm doing that.  There's been a little run on shaving soap, so I made a batch, and made a batch of Lavender too.  It will be good to get stocked up for the holidays. 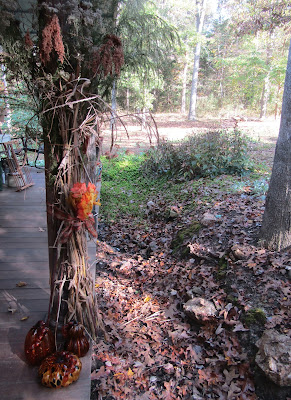 A little fall decor, using mostly natural items from the homestead, was placed on the porch to cheer us as we come and go.  I thought to try to find an old friend on facebook, and found her.  It's been so nice catching up on the past 40 or so years.  There are still quite a few things blooming, and I'm enjoying them so much, knowing how precious they are.  Since many of our apples were imperfect, some are turning brown in storage.  Ones that still have good bits, I give the bits to the dogs.  Otherwise, the chickens get them, and really seem to like them.   A month after submitting it, I received an email from Swagbucks, saying my receipt for an offer was not readable, and to submit another.  The offer had of course ended, so when I tried to do this, I got another email saying they couldn't help, but got yet another email I could reply to.  The deal was worth $12, and I persisted.  I'm glad I did, as they gave me what was due me. 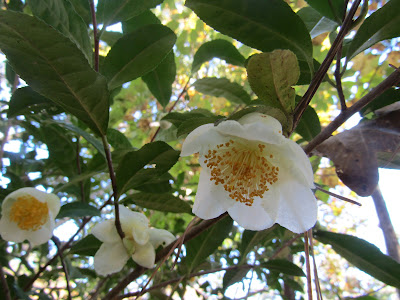 On a run to town to return library books, I ran a few other errands.  Some deals included $1 off a block of feta cheese at Food Lion, B1G1 almonds and $2 off pistachios at Walgreens.  A $5 reward was redeemed towards my purchase.  I filled up for $1.95/gal., and noticed it had been almost a month since my last fill up.  Saturday was an amazingly warm 80 degrees.  I worked on lots of outdoor chores, including hanging two loads of laundry, vacuuming and organizing my car, giving Guinness a bath, and washing the house windows.  On Sunday, I blanched and froze eggplant.  I'll be working away from home Mon-Weds, and wanted to be sure none of it went to waste.  I cut an order of soap for a B&B, and will wrap it during down time at work.  A batch of At The Forest's Edge soap was made, one of my favorites, which incorporates parmotrema lichen extract that I gather.  Kale was harvested, and used in a salad.  Several sweet peppers were harvested.  I hope to make a small batch of pickled peppers sometime soon.  Several tromboncino squash were shared with friends, and they gifted us several "seconds" pottery pieces, which are lovely.  Wishing you a peaceful week, friends.

The weather has been just glorious for working outside, hasn't it? Sounds like you are still harvesting well into the autumn.

Glad you are staying well and keeping busy. Lord knows, there is always something to do around the homestead!

Have a great week!

Indeed it has! I'm tickled to still be harvesting squash, eggplant and peppers. Yes, always a variety of things that need doing.

The yard art is lovely! Way to persevere with getting your Swagbucks points. I've had to do that a few times and only once has it been wasted time :)

My husband brought home scrap building materials from a jobsite so we now have kindling for fire starting, plywood for the top of the kitchen island coming soon, and wood for the new shelf in the pantry. We opened checking and savings accounts for our teenage daughter and changed our savings account all to an online bank with no fees. I redeemed Swagbucks for a $25 Amazon gift card and added to the Christmas funds. I spent rest time each day reading blog posts and watching some favorite vlogs.

More on my blog at https://cottageonblackberrylane.com/frugal-fun-homemaking-for-october-24-2020/

Good deal with your husband's gatherings. What are some of your favorite vlogs?

What a great way to describe a garden this time of year: it has the "dwindles." Perfect!!

Ha! Seemed an apt word to me.

Laurie, a few of the vlogs I watch regularly are Life at Home (used to be Coffee with Kate), Melissa K. Norris Modern Homesteading, What Vivi Did Next (I just found her and am enjoying her gardening videos), Ellen's Abundant Life on Less, and The Elliott Homestead. So many fun ones out there!

Thank you! I've been enjoying The Green Renaissance and The Cottage Fairy recently. I'll check these out.

Hello! I followed you here from The Prudent Homemaker to ask about putting dog fennel in the coop. Do your chickens eat it? Does it have other purposes? I see it around here all the time so I'm curious if it has any real uses. Thank you!

Hi Lorin, Dog fennel has some insecticidal properties, and a little bit of fragrance. My chickens do not eat it. It's a nice addition to the nest boxes. I'd hoped it would work well as a strewing herb on the floor of the coop, but the fragrance seems only noticeable the first day or two.

I loved the turkey your husband made from the piece of metal. It is some yard art that will never rot and last you for years.
I read the vlog suggestions and will give some of them a try...when canning slows down.
Jeannie@GetMeToTheCountry