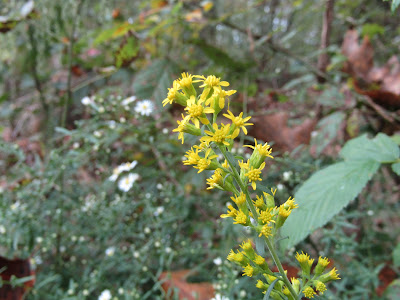 Hello, friends. Last week, laundry was done, and hung on the line several days.  Another batch of goldenrod was harvested for dyeing.  I did some quick research to see about adding it to the previous dye bath.  I never found an answer, and tried it.  The second round doesn't seem to have imparted much more yellow to the fabric.  It seems as though it's one of the dyes that adheres best to animal fibers such as wool.  A spaghetti squash was shared with J's business partner, and some tromboncino with my SIL and her friend, who came for a visit.  We enjoyed hanging out by the pond.  On a cool morning, I baked two loaves of raisin zucchini bread, and froze one.  Pepper and eggplant limbs were secured with some of the twine I found earlier in the summer.  J dug the peanuts in the pond garden.  As we expected, there was not much of a harvest, but I gathered what there was the following day.  The peanuts and sweet potatoes are drying on tin in the carport. 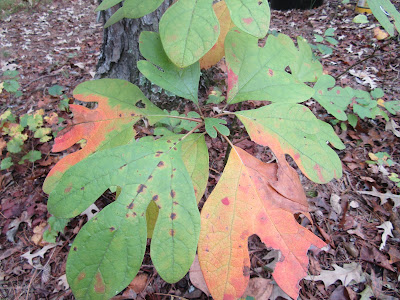 I found one more chanterelle, and used it in a breakfast scramble, along with tromboncino and sweet red pepper.  In oatmeal, I enjoyed figs, a pawpaw and persimmons several days, all homestead fruits.  I used a long handled fruit picker to harvest most of the remaining pears.  The wire shelves we store our garden produce on, such as potatoes and winter squash, were wiped down with some of the thieves vinegar I made in the spring.  We've had some things go moldy, and I wanted to see if this would help.  A batch of golden paste was made for the pups.  Eggs were boiled for egg salad sandwiches.  Our cucumber, tomato and pepper were used in a salad.  Hummus was made for lunches.  Tomato rice loaf was made, this time with brown jasmine rice.  Two free Kindle books were downloaded.  Three celery ends were planted in the garden, and they're already sending up new growth.  Black bean burgers and garlic roasted potatoes were made for a dinner. 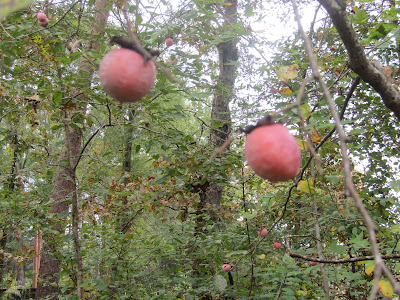 We had a couple of days in the 80's, so I took advantage, and had an outdoor shower one evening.  It was most lovely.  I had an idea for Christmas gifts, and placed an order.  The items came in, and I scoured all the pieces, along with a shirt I want to dye.  A pot of zucchini soup was made, with our squash, tomatoes, onion, basil & parsley, and homemade broth.  I signed up and watched a free webinar of invasive plants and native plants in our area, and learned several things.  Another fairy egg was found in a nest.  It's still a mystery who's laying them.  I potted three of the Meyer lemon seedlings I started from seed.  Pizza was made from scratch, and included our peppers, eggplant and oregano.  I roasted the eggplant, and what wasn't used on the pizza was frozen for another time.  Our last two tomatoes, or parts of them, and cucumber were used in a salad.  We may get a few more cherry tomatoes, but otherwise, the tomatoes are done.  I had a frugal fail, and had to compost three japanese eggplant, which I hadn't used in time. 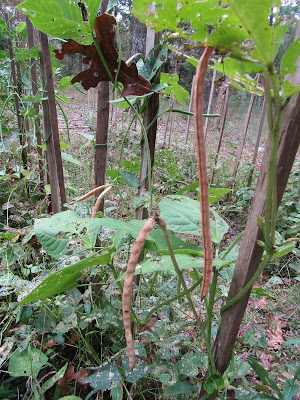 My medical healthshare is going up significantly, but they offered a new lower cost alternative with a higher deductible.  I switched over to that, as I only have it for a catastrophic event.  I'm not on any prescriptions, and see only alternative Dr's as needed.  I do hope healthcare changes in the coming years to more of a wellness model.  It's very concerning to think about having to join Medicare in a few years, when what I've seen them offer is of no interest to me, except possibly the over the counter offerings, and emergency care.  I decided to begin a cleanse, which involves eating only fruits and vegetables for a number of days.  Though we had a small amount of what I needed, I filled a cart on Sunday morning with the remainder of produce.  It wasn't cheap, but it's what I think of as insurance for my health.  A check was mailed for deposit, saving an hour round trip drive.   I made a large fall bow for the mailbox, reusing some wired ribbon, and using some bought for $2 at Dollar General.  I harvested eggplant, cherry tomatoes, the last cucumber, figs, lettuce, basil, parsley, tromboncino, persimmons, apples, black eyed peas and butter peas..  I split the gift fabrics up between the goldenrod and avocado dye baths.  This time, I added washing soda to the goldenrod bath, which did seem to deepen the color a little.

My muck boots are just about two years old, and starting to separate between the lower and upper sections.  J tried mending them with vulcanizing tape, but it didn't hold up.  I've asked for some for Christmas, and hope they will hang on until then.  They've done well, walking an average of four miles a day with me during that time.  The back field is always damp in the mornings, so waterproof shoes are a must.  The boots are often worn to the garden and chicken pen as well.  For Saturday dinner, I harvested winter greens for a salad, and prepared previously canned black eyed peas and sweet potatoes a neighbor gifted us.  Orders were powder coated, and packed up to go out on Monday.  We're getting some nice rain, which all the plants seem to appreciate.  Many wishes for a lovely week.

All of your meals sound lovely and how fabulous to have grown most of it yourself.

I pray that the election brings a better focus on healthcare, my number one priority. Although I know my naturopath won't be covered, I'm grateful that I can afford to see her when I need to. It will be a blessing when integrative medicine is more of an excepted route.

Sounds like you got some of that rain. Our rain gauge showed over 3 inches for the two days.

We did get some nice rain, about 2 1/2" here. It sounds like we're on the same page with healthcare. I would surely love to see progress on that front.

I believe all of the pictures you posted were just for me!

A Sassafras tree: easy to spot because it has three different shaped leaves.
Persimmons hanging from a limb: we have a few just like these on our property. I love them but something is beating me to them.
Dried White Cream Zipper Cowpea: just a guess.
Beautiful colored fabric: I liked seeing your setup for drying your cloth. The view of the woods in the background must make the chore so much more pleasant.

I like that, Jeannie! Critters are definitely eating some of the persimmons, but I'm managing to get a few. The peas are just plain old Black Eyed. I'm still trying to figure out my cloth setup, being a new endeavor. That's what I did on a rainy day.