Autumn Outside My Door & Frugal Accomplishments 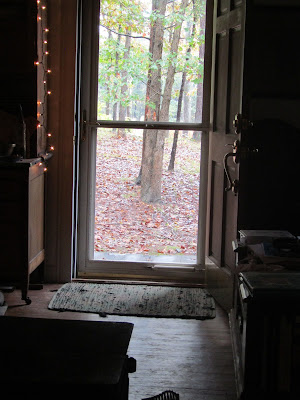 Hello, friends.  With J working out of town last week, I did start the cleanse I mentioned in the last post.  He'll be home before it's finished, but at least I didn't have to worry about feeding him something different for five of the days.  I'm hoping to bolster my immune system, and lose the few lbs. I've put on during Covid, before we get into winter, when I usually gain a few.   When you're under 5', you don't have a lot of leeway before you begin to look like a bowling ball. :o)  I was able to use our squash, lettuce, tomatoes, figs, apples, lemon balm, cucumbers, blueberries and peppers in the cleanse recipes.  I dried another two trays of figs.  Black eye and butter peas, lemon balm, baby kale, arugula, tromboncino, eggplant, lettuce, chickweed, peppers, figs, persimmons and a few cherry tomatoes were harvested.  I'm still finding a few peanuts we missed most times I wander through the garden.  Several loads of laundry were hung on the line to dry.  A batch of yogurt was made.  The pear scrap vinegar, which is tasting very nice, was strained and bottled. 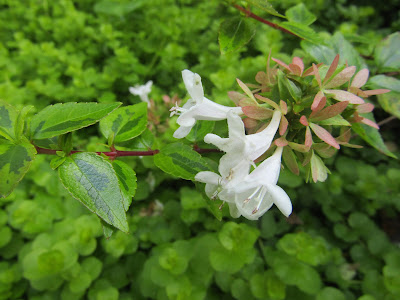 I had seen a volunteer lettuce early in the week, and when I went to move it, found five more.  Happy dance, and they are different varieties than the fall ones that germinated, which is very nice.  They were moved next to the fall planted lettuce.   I redeemed points for a $25 Amazon GC on Swagbucks, using the monthly special, saving 300 points, equivalent to $3.  In purchasing gifts during Amazon Prime day, I noticed that the advertised price of an item increased almost $5 when I went to checkout.  I ended up spending over a half hour on a chat to resolve it, which felt like a major waste of time, but I didn't feel it was right to pay more than the advertised price.  I chatted with three different people, and they never did figure it out, just credited me the difference.  I wondered how many other savvy shoppers noticed they were paying the regular price, instead of the sale price.  My car was in the shop for 9 days, most of that time waiting on a part.  With J out of town, a friend offered to take me to pick it up on Thursday.  I shared tromboncino and figs with her.  J had asked the shop to add a service when we took it in, and even so, the total was less than they had quoted.  One day in the garden, I saw a black caterpillar in the J shape on an eggplant, and later found this chrysalis.  Aren't the gold spots interesting?  I'm having trouble ID'ing it.  The chrysalis of the Question Mark butterfly is very similar, but the caterpillars don't look right.  I wish now that I'd taken a photo of the caterpillar. 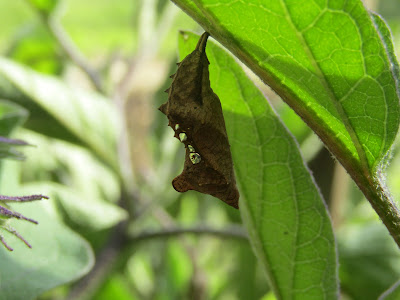 On the way home from meeting my sister recently, I noticed a discount grocery just a few doors down from one that closed some years back.  I went there, the day after getting my car back.  It's a small shop, and some of the prices were a little high, but I was happy to find what I did.  Included was organic peanut butter $1 ea.   All canned goods were .60, and I found several cans of corn, olives,  garbanzos and  soup, all of them organic.  I found 100% unsweetened cranberry juice for $2.99, another bottle of organic juice $1, and a 3L tin of olive oil $15.  The olive oil is more than I usually pay at discount stores, but less than the grocery store by at least $5.  I go through quite a bit between cooking and soapmaking, and was happy to find it.  I also got several pasta, either organic &/or whole wheat for .75 ea.  Though there were some chilly nights in the low 50's during the week, I didn't start a fire until Friday, with the morning rainy and in the 50's, and forecast to get down to 39. 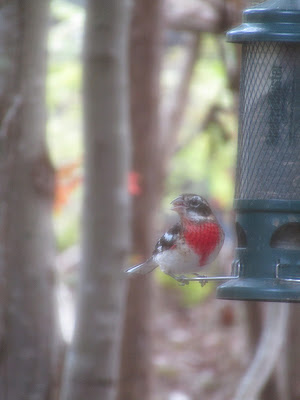 I was delighted to find a rose breasted grosbeak on the feeder one day.  Sorry for the blurry photo, taken through the door.  Another morning, I saw four bluebirds eating berries on a beauty berry just outside our window.  I find so much cheer in the birds that visit.  We had a frost advisory on Saturday, so J and I covered up the eggplant and peppers.  All was well, as it was just a barely noticeable frost.  I harvested winter greens, and made winter salad for J.  Several orders were powder coated on Sunday.  Now that it's candle season, I cleaned up several candle holders, and saved the dripped beeswax bits for fire starters.  Plantain leaves were gathered daily for the chickens.  I decorated with some fall decor, inside and out, and hope to do a little more in the coming days.  Moving into the darker days, making cheer any way we can seems like a good idea, especially this year.

A cleanse sounds like a good idea. Do you just cut certain things out of your diet for the 9 days or is it very strict?

What a treat to see that grosbeak! I will be on the lookout for them!

Enjoy this gorgeous weather! It's a gardener's dream!

The cleanse is fairly strict, more so as the days go on. But, he gives alternative options and recipes. It's lots of steamed vegetables, lemon water, celery juice, a smoothie, spinach tomato soup. No fat or salt, which I've missed. I had to buy one ingredient online for the smoothies. Otherwise, it's things that would be in a grocery store. I did sub my own blueberries for wild ones. Hope you have an enjoyable week too!

Oh, and green salads, with a wide variety of possible additions. I generally did more of a traditional one for lunch, with cucumbers, tomatoes, peppers, and one with fruit for dinner, usually fresh figs and apples.

Sounds fairly easy to do. The no fat/salt would be tough though.

I find so much peace in your writing. Thank you.

Thank you, April. I think of you often, and hope you're doing well.