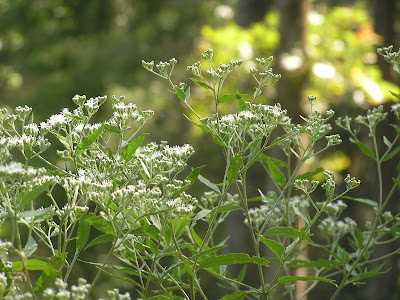 Hello, friends.  As I really needed the freezer room last week, I took out 5 gallon bags of vegi scraps, simmered them several hours, then canned the broth, which added 9 pints to my pantry shelf.  A free dog food sample I requested arrived in the mail. I harvested tomatoes, okra, green beans, lima beans, cantaloupe, tromboncino squash, eggplant, a red pepper, basil, chives, oregano, pawpaws, apples, pears and plums.  The garden harvest, food preserving and cooking are taking up the majority of my days.  That's August for you.  The hens are slowing down on egg production, but we still have more than enough.

There are two seasonal soaps I make.  This week, I made Pumpkin Chai, which will be ready to help usher in the Fall.  I use pumpkin or winter squash grown in our organic garden as one of the ingredients.  Pumpkin is said to soothe skin, contains enzymes that help dissolve old, dry skin cells, and can help with damage caused by free radicals.  Though the recipe remains the same, I do play with the presentation from year to year.  I've done layers and swirls in the past, and do believe this year's is the prettiest yet. 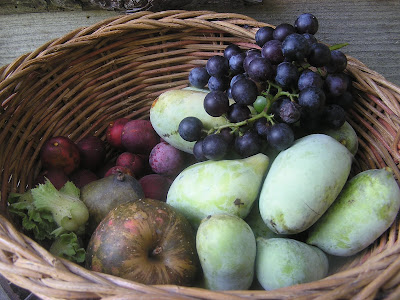 Another two ice cube trays of pawpaw pulp was frozen.  I made the first, and possibly only, tomato pie of the summer, and made this squash dish to use the last of the yellow squash.  Before it gets colder, I decided to enjoy another outdoor shower.  This time, I shared it with a snail. :o)  J made the teak bench for our shower.  He sealed it with linseed oil and beeswax that we had on hand.  I bought the teak on ebay, and the cost was about 25% of what they were selling for online.  This one fits our shower perfectly. 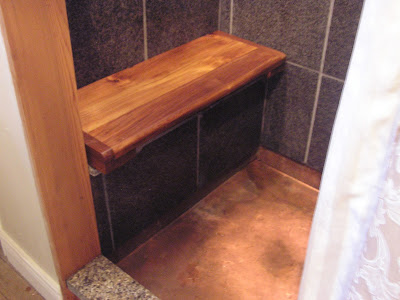 On Thursday, I canned the small fruits.  First came tiny plums. I'd originally tried saving them up for a few days to do something with, but in a couple of days, they went bad.  I gathered about a quart of them, and decided to make plum sauce.  Though I made plain sauce, just plums and sugar, I'd like to use it in asian dishes. I'll probably open a jar and add vinegar, peppers and the other ingredients, and keep it in the fridge to use.  If I can any more of them, I may go ahead and make the seasoned plum sauce, but I knew I had more canning to do that day, and wanted to keep it simple.  Though most of the large tomatoes are rotting from all the rain, there are lots of small and cherry tomatoes.  I decided to turn those into juice.  I did the plums and the tomatoes the same way, cooking them until soft, putting them through the food mill, then reheating and putting in jars.  The tomato skins were dried in the dehydrator, then ground into powder to add to dishes that need flavor.  I thought they looked like festive confetti. 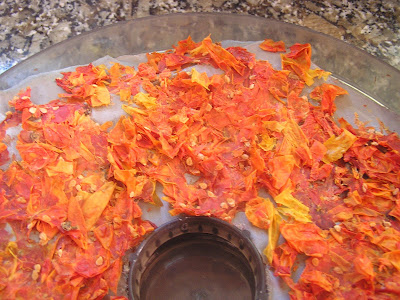 With the leftover tomato pie, I pulled last year's okra from the freezer... we have fresh, but really need to finish last year's.  I also used our tromboncino & tomatoes in a side dish.   I've been harvesting and shelling dried lima beans every few days.  Eggs and tomatoes were used in a breakfast dish.  Yogurt and hummingbird food was made, and eggs were boiled.  Laundry was done on a lovely day with low temps and humidity, and hung on the line.  With the lower temps, baking is again on my mind.  One of the things I've been hankering for is ww chocolate chip cookies, so I ground enough wheat for these and another recipe or two.  Though I've provided a link before, I had a hard time finding it, so I'm going to copy and share the recipe, to make it easy.  I first found it via Diary of a Locavore:

WHOLE WHEAT CHOCOLATE CHIP COOKIES
This recipe, from Kim Boyce's Good to the Grain, has become my go-to. It's about as healthy, straight-forward, and delicious as chocolate-chip cookies can get.
3 cups whole-wheat flour
1 and 1/2 teaspoons baking powder
1 teaspoon baking soda
1 and 1/2 teaspoons kosher salt
1/2 pound cold butter, cut into 1/2-inch pieces
1 cup dark brown sugar
1 cup granulated sugar
2 eggs
2 teaspoons pure vanilla extract
12 ounces bittersweet chocolate chips, such as Ghiradelli's 60% Cacao
Preheat the oven to 350 degrees F. Grease two baking sheets, or line them with parchment paper.
Combine the flour, baking powder, baking soda, and salt in a mixing bowl and whisk well.
Combine the butter and sugars in another mixing bowl or the bowl of a stand mixer. Beat until they are just blended, about 2 minutes. Beat in the eggs one at a time, then mix in the vanilla. Add the dry ingredients and mix until just combined. Add the chocolate and stir until just incorporated.
Form the dough into balls—I make mine a little bit larger than golf balls. Arrange the balls evenly on the baking sheets, leaving about 2-3 inches between each one. Bake for 15-18 minutes, or until the cookies are evenly dark golden brown. Transfer the cookies to a rack to cool, and repeat the process with any remaining dough.
Note: These cookies are best eaten within a day or two of baking. I like to make a big batch of dough, bake off about a third, and keep the rest in the refrigerator to bake over the next week or two.

We enjoyed the cookies, and a dinner of Pasta Norma.  Another round of concord grapes was harvested, and 3 more quarts of juice was canned.  The skins and seeds went into the dehydrator, to use in bird suet.  Lambs quarter was gathered and frozen.  A new pawpaw recipe was tried.  If it's a good one, I'll share next post.  Some dye experiments happened this week. 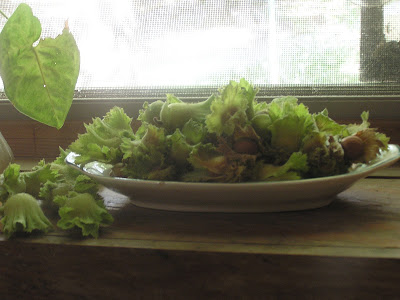 A while back, I'd collected pine bark, which had been soaking in water for several weeks, as recommended.  Sadly, it didn't impart any color on a pair of leggings, except for a couple of dingy looking places.  Happily, I also tried dyeing with marigolds, and it did color the sheet I plan to use as the bottom of the summer bed cover I won at Hospice a pretty yellow.  I'd been keeping all the hazelnut husks, and thought I'd try them next in the dye pot.  After 30 minutes of simmering, there was almost no color in the water, so I added all the hickory nut husks I had saved.  After another hour or so, there was color, though not as much as expected.  I decided to take it off the heat, and let is sit, to see if it deepens.  Most of the online & book research I do on natural dyeing with plants I have on hand turn up nothing or very little, so I will just have to experiment, and see what shows up.  I guess that kind of sums of my philosophy of life too.  Have a great week, friends!

I think I can smell that pumpkin soap from here! Your shower is beautiful. Love the teak bench.
I have been wanting to make a tomato pie, but our larger tomatoes have been few and far between since we returned from NH. I just may go to the farmers market to buy some.

Tomato pie is a treat, and I suppose should be, with all the cheese and mayo in it :o). Thanks, I think he did a great job with the shower too.

You are so kind to say so, Suzie. Life is always interesting around here.

As always I love the pictures you post. I thought I could get over but have been tied here with some things keeping me busy...unexpected company for 2 days last week.....oy!

There are still grapes, M!

I have always wanted to try eating a pawpaw but never had the opportunity. Lima beans are another story. I am constantly shelling them all summer long. I love them fresh with just a piece of homemade whole wheat bread. It is a meal for me.

Jeannie, I took a large basket of lima beans with me when I got my hair colored this week, being I sit for a few hours (it's a multistep natural product). I expected to be laughed at, but instead one of the women shelled more than half while I was being worked on. She tried to take them all to shell, and I had to tell her I enjoyed doing it. :o)

I find shelling beans relaxing, like quilting, only your fingers turn green. It is hilarious you took them with you to the beauty parlor. It was much more social than sitting there playing with your phone.
Jeannie

Yes, it was more social, Jeannie! It's a tiny place, and she doesn't do nails there, and I've never been there when she was doing a perm, so no smelly stuff... just hair cuts.