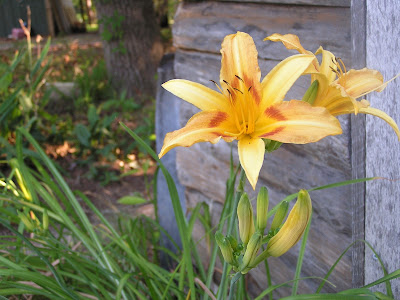 Hello, friends.  Like housekeeping, mending seems to be a task one has to do again and again.  Last week, I mended two pairs of shorts and a dress.  The Japanese beetles have arrived in force, and many were hand picked, dropped in water, and fed to the chickens.  Woolly aphids were discouraged with insecticidal soap, though it didn't seem to deter them much, as they seem to be back the next day.  Cucumbers are beginning to come in now, as well as a few blackberries and the first of the blueberries.  I made asian slaw, and chopped up the cabbage core for the pups dinner. I harvested some purslane and lambs quarter while in the garden, and chopped them up to enjoy in eggs one morning. 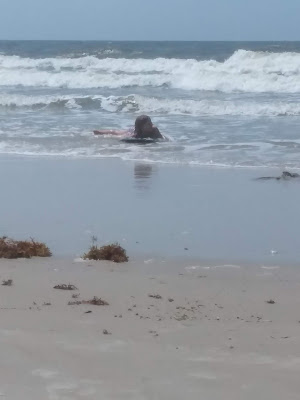 We took a beach trip with our granddaughter, S.  My sister & her family were renting a house.  Her eldest was not able to come for the first 4 days, so my sister asked if we'd like to.  It was a separate little guest house, and was perfect for us for 3 days.  She would not take any money, saying it would just have been sitting empty.  I took our tomatoes, basil and rosemary, plus a gifted zucchini, and made a pasta meal to share with everyone, and ingredients for a new drink she wanted to try, peach bellinis, which all of us adults tried and thought was a yummy summer beverage.   From home, I brought snacks and water bottles for the beach.  One afternoon, we went to see a lighthouse (free), and went for ice cream, a pretty inexpensive treat.  We also went to two thrift stores. J got a box fan for about 1/4 of what he had seen them online, and it's much quieter than the new one he bought not long ago.  I found 2 thick flannel pillowcases for .25 ea., and a colorful fleece blanket that S chose for $4.  I walked each morning on the beach, and we all spent time on the beach each day.  After getting home, I caught up on laundry, and made yogurt. 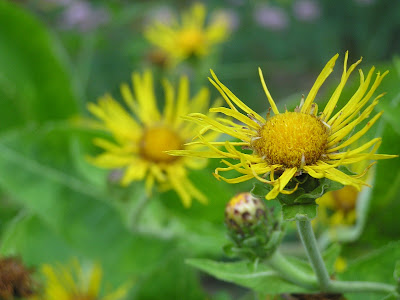 I tried a new recipe, for barbequed chickpeas, which included making the barbeque sauce.  I thought it was pretty good, but J didn't love it.  He agreed to try it with another bean, so I'll try it again doing that.  I enjoyed blackberries, blueberries and pawpaw (frozen last year) in smoothies, as well as the last of the fresh grapes I'd bought for the beach.   I'd frozen most of them, and will use them in smoothies as well.  M gifted me a warm winter hat that he'd crocheted.  I requested one that covers my ears, and it's purple, a favorite color.  It feels like it will be very toasty on the coldest days of winter.  Broccoli and lettuce were harvested.  They're both bolting, so I'm harvesting them while I can.  The second patch of lettuce never germinated, perhaps because the ground was already too warm.  We had several rain showers early on, so I'm pretty sure that wasn't the reason. 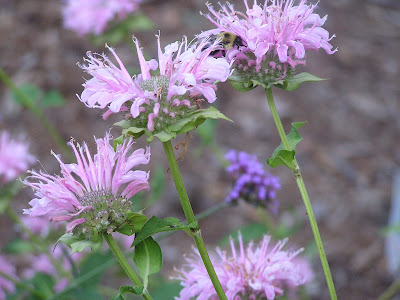 I'd been needing to finish painting a door for some time, and got that done over the weekend.  I painted it with chalk paint, green on the outer side and white on the inner.  As it's the main door we use, I also waxed it to help with durability.  I also got the lamp shades with peeling paint cleaned up with acetone.  I bought etching cream a few weeks ago, decided what design I wanted to use for the shades, and purchased stencils on amazon.  After checking that there was no cash back in the categories I wanted, I bought the stencils and a couple of other small items through Brandy's link, so she will get a few cents from the purchase.  I placed two more online orders, taking advantage of 10% off of each, as well as free shipping.  For Sunday dinner, I made asian cucumbers, and pizza using a frozen homemade crust, our peppers and eggplant, oregano and recanned olives, along with other vegi's.  The pizza was baked in the toaster oven, to minimize heat on a day in the upper 90's.  Wishing you a week of seasonal pleasures!

Laurie, your pictures are just beautiful. It sounds as though your beach trip was heavenly!!

~Nancy of The Bonnie White Hare

Thanks so much, Nancy! It was a very enjoyable trip!

Beautiful and colorful flowers! You have many veggies on your garden!
Swimming is a very good thing to do during summer:)

We do have many veggies growing in the garden, WW. The ocean is a wonderful place to be!

I've always hated mending and have always much rather make something from scratch. Well I can't wait to see your cucumbers, the photo of the nasturtiums reminds me of when my mom used to grow them when we lived in the San Francisco bay area; we are getting so much rain the last two weeks I am surprised anything is growing here.

We've been having the opposite problem, Linda, too little rain. But, we've thankfully had some in the past few days. I did get a taker for some cukes today!