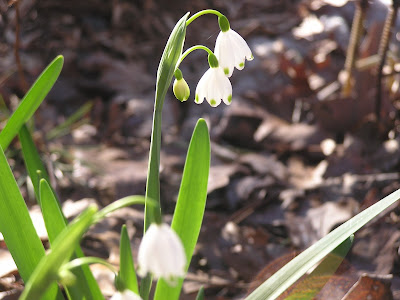 There are still quite a few winter squash in the root cellar, and it's time to be eating them up.  I made a butternut squash crumble, which is my favorite winter squash recipe.  While it was baking, I put two of the cushaw squash in the oven to bake for pies.  The mushrooms that didn't go into the crumble were sauteed in butter, and some were added to a pizza the next night.   Lots of good pantry items went into the pizza... home ground wheat, roasted eggplant and sweet pepper from the garden, black olives I'd canned from a #10 can (using these instructions), as well as green olives and artichoke hearts.   Our oregano went into the sauce, along with onion and garlic.  Half of the sauce, a second pizza crust and 1/2 of the mushrooms were frozen for a future meal. 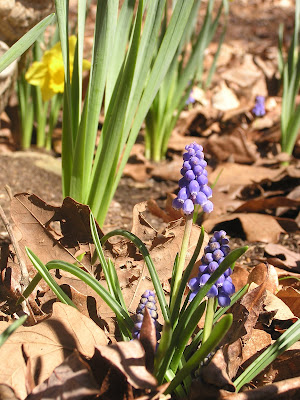 I've been making lots of soap, to build my stock back up.  The woodstove is going again, and has been used to melt the oils, saving on propane.  While in town to deliver soap and ship an order, I ran by the discount grocery store.  I find very little there these days, but did find codling moth traps for the orchard, for $3.  The regular price on amazon is $15.99, but it's on sale for $8.39. I'd say I still got a pretty good deal, and am hoping it makes for nicer fruit this year.  We placed the two traps on Sunday.  I gathered branches of forsythia to enjoy in the house.  J worked up areas for planting potatoes and garlic.  Our kale seedlings are up, and one of the lettuces too.  We don't have a grow light set up, and it's been way too windy to put them outdoors, so they're already getting leggy. 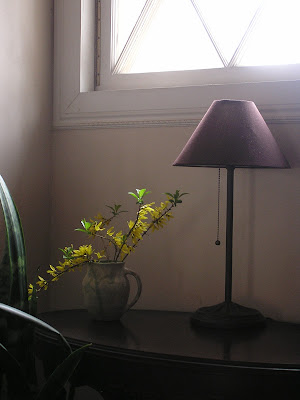 While preparing potatoes for dinner one night, I cut off the eyes and set them aside to plant.  For one breakfast, I made an omelet.  I remembered having a crepe with kalamata paste in it, and how good it was, so decided to try it with a jar that was already open, along with grape tomatoes and artichoke hearts.  It was yummy!  I've been giving away eggs, but there is still an abundance.  One night, I made a frittata, which used another 4 eggs.  I made asian slaw with some of our cabbage that needed using.  Recently, I picked up several dessert pedestals I made some years back, and had at a gallery.  I asked J if there was some way to separate the plates and candlesticks, as I really liked the plates.  He suggested I put them in a cold oven, and bring it up to 225 degrees.  That worked well for two of them, but a third required 240 and quite a bit longer, and eventually separated, so I can add three more plates to our rotation. 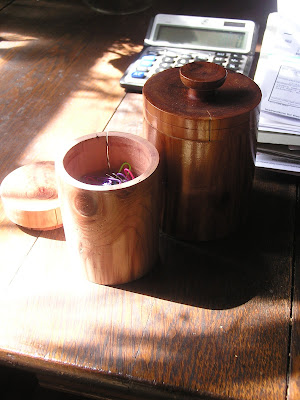 I've been working away at my taxes, little by little.  I can only stand 2 to 2 1/2 hours at a time, before my brain hurts :o).  I finally finished readying everything on Saturday, so we can make an appointment to have them done soon.  I've been meaning to share the cedar boxes M made for me.  They hold large and small paper clips, which I had out while doing taxes, and remembered to take a photo to share.  He's also made several shaving brush handles for my shop, and is getting pretty handy with his lathe.  I've been plugging away at my to do list as I'm able.  I've been enjoying having indoor home days, which helps me to stay focused on tasks.  My mending has patiently been waiting for me.  Last week, I mended a winter coat, a throw pillow, and the binding on a hooked rug.  I've been working on a second rug, which is in much worse shape, and finished it Sunday evening.  It may not be worth it, as it won't last long even so, but it's a vintage one I'm fond of.

On Sunday, J planted the garlic, and we planted the potatoes.  This year, we're trying King Harry potatoes, in addition to a few eyes from different varieties we saved from last year and some store bought ones.  The garlic is California White, a softneck variety.  Here's hoping both do better than in recent years.  The chickens have not been terribly cooperative, as far as scratching up the garden.  Though they have a large area to work up, they insist on going through the 4" holes of the fence to go outside the garden.  I chased groups of them back into the garden four times on Sunday, before giving up, and putting them back in their regular yard.  Some areas are in fairly good shape now, but they could have done a great deal more, if they'd just stayed in the garden.  Sheesh.  I made roasted potatoes with our rosemary Sunday night, and am thinking potato leek soup will soon be on the menu.  Wishing you blooms to cheer you , and good things to eat!

All of your flowers are beautiful! I am having a few things bloom, but we had snow last week, unexpectedly, so it slowed things down a bit. I also think the little wooden boxes are amazing!

So, how did you can the previously canned olives? I'm curious. Do they taste the same?

Becky, I got the olive idea from Jackie Clay, and used her instructions. They do taste the same, and have the same consistency. Here's a link: http://www.backwoodshome.com/blogs/JackieClay/2014/06/30/q-and-a-canning-olives-and-pickled-eggs/

I don't know which I prefer: cedar boxes or peach blossoms! Heaven on earth!

I think we are l ready for Spring. Your flowers are lovely