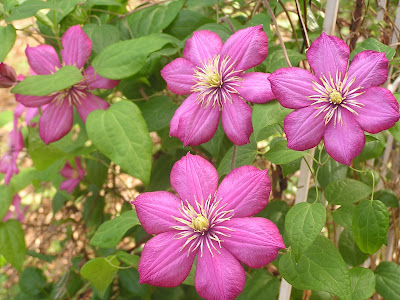 Hello, friends.  Last week, I worked several mornings at one of my occasional jobs.  While in town one day, I dropped off three boxes of donations at Goodwill.  I harvested lettuce from the garden, for salad two nights.  Celery was cut, to go in a waldorf salad, which included one of our apples.  Brussels sprouts were roasted with our garlic, and our potatoes were enjoyed with them.  I made a batch of homemade lemonade for us & my stepson to enjoy in between working on projects.  At the discount grocery, I purchased two boxes of organic K cups to give to my sister as a thank you.  They were $4 a box ($7.25 on amazon).  I  got 2 bottles of organic apple juice @ $2 for our upcoming hayride.  Also found was Weleda's sea buckthorn hand cream @ $3.75 ($8.99 on amazon).  I'll save this for late winter when my hands typically get very dry. 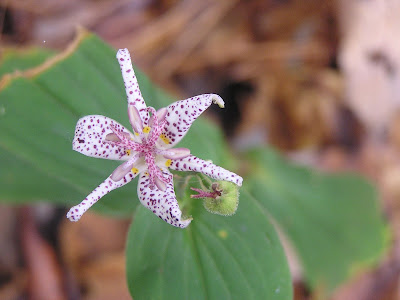 It's cooled off enough that we've not needed the a/c, and have heated with wood several nights.  Then it warmed again, so we could go without any heat for the last several days.  Windows were opened for fresh air when it was comfortable to do so.  Laundry was done with homemade soap, and hung on the line.  In the bathroom, homemade soap and deodorant were used.  I made swagbucks goals most days.  On the way home from an out of town class on Friday, I picked up almost 2 full 5 gal buckets of coffee grounds from the coffee shop, which we'll add to the compost.  Over the weekend, J offered to grill. I prepped a tromboncino squash, trying a new recipe, which was my favorite grilled squash recipe so far.  I also prepped asian eggplant.  They were good, but not quite done enough.  When I roasted the leftovers, they were better. 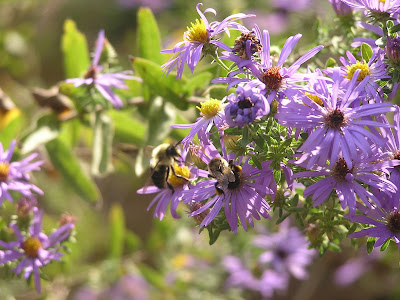 I read about a product called Hairprint, which I'm going to give a try.  It's not a dye, but somehow restores your natural color in a nontoxic way.  It's not especially frugal, and quite complicated to use, especially if you've got conventionally colored hair growing out.  I asked my sister, who used to do hair, if she'd help me this first time.  I'm bringing an apple cake and the above mentioned K cups, as well as some garden produce as a thank you.  I hope it's worth the effort.  There has not been a hard frost yet, so things are still blooming here, which is always cheering to me.  When I walk by the asters, there's a noticeable buzz, from all the pollinators. 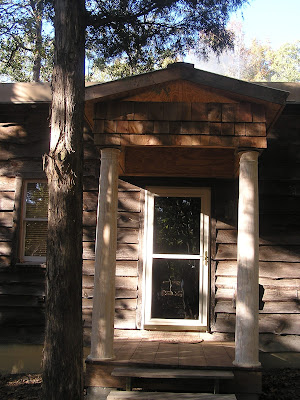 Though I'd been told the posts had been fully stripped last weekend, they sadly had not been.  J & I both worked on them a couple more hours, and then got them set in place  J got all the cedar shingles on the fascia. The posts and shingles match our porch on the side of the house. We still need to apply linseed oil to the posts and paint the ceiling of our little porch.  The house plants were all brought in last week, with some night time temps in the upper 30's.  The rain has begun this morning, most welcome here.  There's a chance of severe weather later today, even tornadoes.  If you could use some frugal encouragement,  The Prudent Homemaker is chock full of it, from the information Brandy shares, to the numerous comments on her posts.  Be safe, friends, and have a great week!

Hi Laurie you amaze me with all of your accomplishments...well done...I wish I could find somewhere to get the coffee grounds from for my compost...I don't drink coffee. will keep my out. :-)

Hi Suzie- getting the coffee grounds has been on my to do list for a while. Most weeks, I'm in town only one day a week, and they're best to pick up before that, being they get moldy. I just have to remember to bring buckets if I have an extra day in town. You can never have enough compost!

We have not yet had a hard frost; I still have marigolds and spiderwort standing. The bees are still busy in them too!