The Circle of Life & Frugal Accomplishments 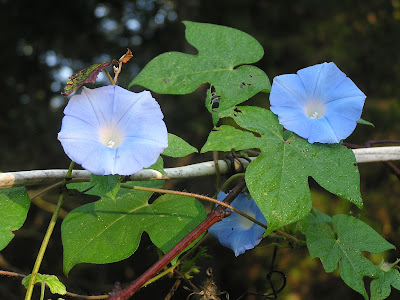 Before vacation, I requested books from the library, and harvested butternut squash, okra & tomatoes.  I decided to make my first egg in a hole for breakfast, after reading about them & thought it was good.  After we got some rain, J & I planted cabbage, cauliflower, broccoli & collard seedlings that he bought.  Some of the lettuce, kale, turnip & either beet or chard seeds are up.  I pulled a peanut plant, and we both enjoyed them after they dried a day.  Even green, they were sweet and good.  Hopefully, the rain will help more of the peanuts to mature.  I made pasta salad twice using our cucumbers, tomatoes, basil & oregano.  I'm joining in with Frugal Accomplishments today. 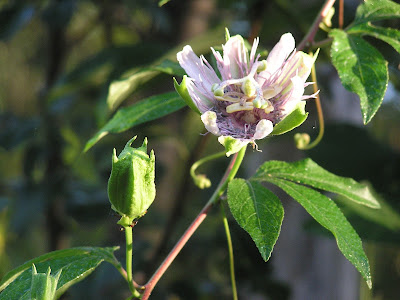 J & I planted a row of the collard seedlings I started.  We're trying to make sure we have lots of good, healthy plants going into fall.  I baked 2 loaves of apple, carrot, zucchini bread, which used our eggs, zucchini, & homemade vanilla, as well as 2 apples and an orange that needed using.    Once cooled, I put one loaf in the freezer.  I colored my hair at home.  After some much needed rain, I moved around some of the lettuce that had sprouted.  Several plants were together in clumps, so I spread them out a bit, and seeded another small area as well as another 6 swiss chard.  We had been regularly watering the gardens with both well and pond water the past few weeks, so now we can take a break for a time. 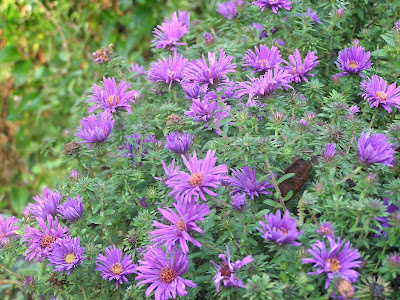 I harvested eggplant, tomatoes, okra, lima beans, tromboncino squash & gathered eggs.  Shelled a bowl of crowder peas.  I picked swiss chard leaves with holes & fed them to the chickens.  At Aldi's, I bought organic beans (pinto & garbanzo) for .79/can, avocados for .69, organic bananas .69/lb, red onions on sale .79/2 lbs, 3 bags of 25 mixed fall bulbs 2.49 ea., & organic red grapes 1.29/lb.  At Lowes, I found a can of organic refried beans on the mark down shelf for .79.  I made yogurt & kefir, and composted vegi scraps.  It's finally cooled enough to be able to go without A/C during the daytime most days and every night.  I dehydrated most of the red onions, and canned summer squash and eggplant.  I planted the remainder of collards I had grown from seed, and gave the seedlings that were left to a neighbor, then planted one of the bags of fall bulbs with red flowers in a couple of beds near the road.  I watered plants with the canning water. 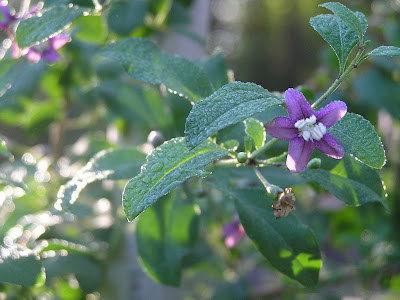 During our trip to the coast, I noticed two people cleaning windows, and they both used squeegees.  The housekeeper at our motel used a spray bottle of window cleaner instead of a scrubber and water solution, but a man working on shop windows used a scrubber and squeegee.  Interesting the things you can notice when your focus changes.  On the way home, we stopped at a discount grocery store.  Prices weren't as good as they were a couple of years ago... this time, a 3L tin of olive oil was $18.99!.  I'm used to paying $8 to $12 at the discount stores.  But there was organic juice for less than 1/2 price, a 28 oz can of organic crushed tomatoes for .79, a box of No. 2 coffee filters for .99, and a couple bags of natural cats treats I'll save for Christmas.  When we got home, J started a couple loads of laundry & we hung them on the line.  I headed to the garden and picked a basket of okra.  The ones that are too big were cut open for the chickens, so they could eat the seeds.  I found a cucumber, a pear and grabbed a couple lima beans in passing, then headed to the pond garden, where I found 3 tomatoes and 3 butternut squash.  Some sort of worm really did a number on the swiss chard while we were gone. 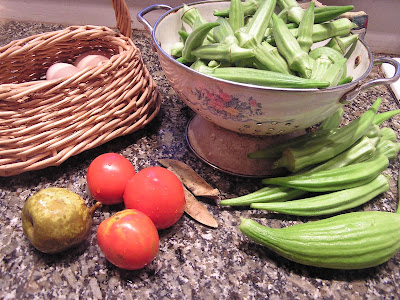 The rain gauge had 4 3/4" of rain in it, which we had emptied before we left.  We knew there were several powerful storms that came through, which knocked out our phone and internet.  Thankfully, our provider sent someone out quickly, and we were soon up and running again.  Noodle beans were picked over the weekend, and crowder peas and cantaloupes were checked in the road garden.  Something beat us to one of the cantaloupes, and it was too damp to harvest crowder peas.  We visited our favorite thrift stores at the coast.  Finds were a cashmere sweater, embroidered handkerchief, 2 baskets, pair of suede Skechers, new nightgown, long sweater top to wear with leggings, new Aigner wallet & rust colored napkins for our upcoming hayride dinner, all for $25. 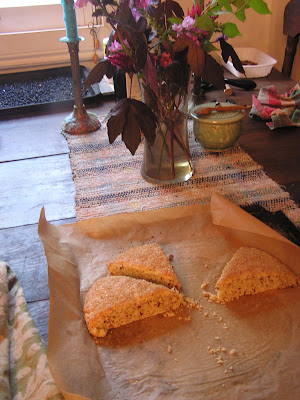 With the weather cooling, I'd been wanting to make scones.  I had in mind lemon blueberry with our frozen berries, but when I read the recipe, it called for dried blueberries.  I used craisins instead, and they turned out lovely.  I painted two porch tables with chalk paint.  Now that they're done, I'm looking at the wardrobe that was given to me some time ago.  It needed work then, and needs even more now.  I started by pulling all the drawers out, dusted it all, and pulled the laminate off the lowest drawer, as it was hanging loose in multiple pieces.  Much of the piece needs to be glued back together, but most of the joints are dovetailed and I believe all the pieces are there.  It's a beautiful piece.  I hope I can do it justice. 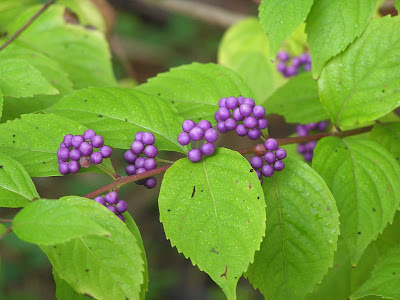 Last night, I woke to the sound of coyotes howling off in the distance.  Living on a homestead, you can't help but remain aware of the circle of life.  Yesterday, Joseph was heading up the driveway, on his way to buy some Bt to remedy the worms eating our swiss chard, when he noticed something amiss in the chicken yard.  A hawk had gotten one of our youngest chickens, and was feasting on it.  I knew hawks would grab a small chick and take it, but I didn't realize with bigger chickens, they would kill it and eat it in place.  This 16 week old chicken was a rooster, which explains why the big rooster did not protect it.  They will do their best to protect the hens in their flock, but usually not another rooster.  Of the 6 chicks born here this year, there are 3 left.  One had a deformity & didn't make it, another died during a heat wave, & now this one.  The other 16 week old chicken is the only hen out of the bunch.  I sure hope she makes it.

Sorry to hear about your chicken. I raised chickens in the past and it was alway upsetting when they were killed by predator. We often hear the coyotes howling at night... even in town!
The storm was a doozy! The worst we have had in a long time.