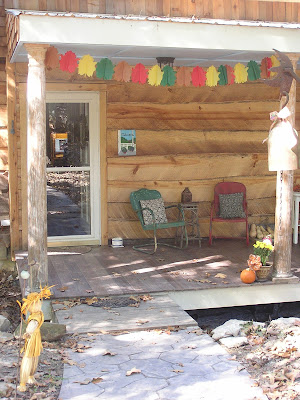 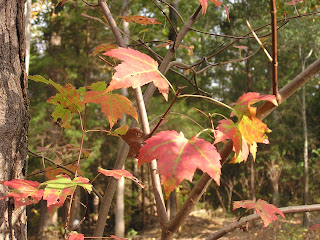 Early last week, we had a bit of Indian Summer, with days in the mid 80's.  There are many plants blooming that aren't usually at this time.  The okra loved it, and put on lots of new blooms.  Since the September rains, I noticed my toad lily putting on growth.  Today I noticed several blooms.   It must be happy where it's at, which is lovely, as I have not had the best of luck with them in the past.  I'm still harvesting small tomatoes, so on one of the warm days, I used some in a pasta salad & another day, I made a tomato cheese pie along with our okra and a salad from our first fall gathering of lettuce.  I also harvested dried lima beans, eggplant, okra, basil, oregano & garlic chives.  I walked with the pups for exercise, with Joseph joining us a few times.  I'm joining in with the Frugal Accomplishments community today. 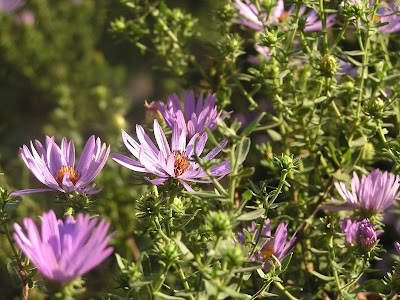 The hand washing and laundry were done with homemade laundry soap and hung on the line.  At our ladies homestead gathering last week, I shared how I make laundry soap, deodorant and wool dryer balls. It was a fun night, and everyone got to take home some laundry soap and a jar of deodorant.  I dug up an elderberry to share with a women who requested one.  I received a $5 off $15 coupon for Big Lots.  I had already planned on going there to pick up something, so J & I picked up a few more things and used the coupon.  Our local library has a basket for donated magazines that anyone may take, so I dropped off a pile that had been collecting in my car.  There were also 2 toner cartridges in my car that were dropped off at Staples for recycling and a credit.  When dropping off soaps at the local hardware store, I got black oil sunflower seeds for the birds, and it ended up being an even barter, so no money out of pocket. 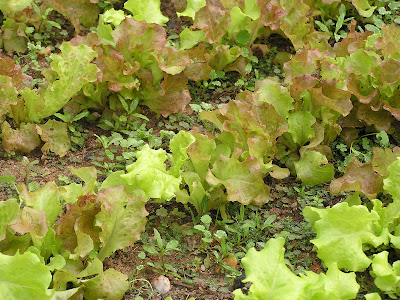 With nights in the low 40's and 30's in the forecast, I brought in all the houseplants.  J & I harvested our sweet potatoes.  A few had rotted, some had been chewed on, but all in all it was a good harvest.  On the other hand, we also harvested our first crop of peanuts.  We knew it would be skimpy due to the drought and weeds, but they had also been eaten by something, and quite a few were resprouting, so we'll be lucky if we end up with a quart or so once shelled, though there were 6 long rows.  Our main goal was to add the plants back into the soil to enrich the garden, so getting to eat some will be a bonus.  I gave the chickens cherry tomatoes, dandelion leaves and holey swiss chard.

We picked the last of the crowder peas and watermelons.  One melon that had already started turning brown on one end went straight to the chickens.  They may all end up as chicken feed, but we'll give them all a look & possibly a taste before deciding.  J tilled that garden when we were through, readying it for our first ever planting of heirloom wheat.  I'm excited about that!  I harvested more eggplant, and canned another 6 pints.  While watching the canner, I shelled all the dried crowder peas.  J shelled all the green ones, except for the smallest ones which he snapped.  We had the beans with basmati rice, and some of last year's sweet potatoes. 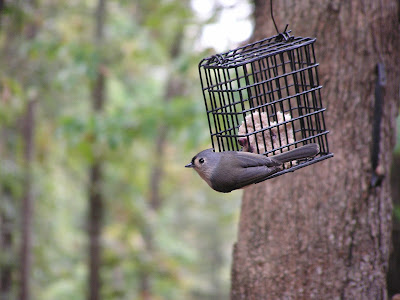 When J tilled up where the sweet potatoes had been, he found quite a few more potatoes.  Some had been chewed up by the tiller, so I cooked up the first of those for the pups tonight.  Sweet potatoes need to cure a month or more before their starches change to make them sweeter, so this seems the best use of the ones that won't last that long, but aren't yet good eating for us.  J got our winter clothes and sheets from the attic, and the first flannel sheets of the season are in use.  A gallon jar of green olives was given to J last week.  I need to read up on recanning them into smaller jars.  I expect it's similar to when I recanned the #10 cans of black olives, but want to be sure I'm following the recommended procedure.  I hope the coming week is a good one for you, friends!

It sounds like you have been busy! I have always wanted to try and grow peanuts but I live in an area that is not conducive to growing them. One of my fondest memories is eating boiled peanuts as a kid. I think I had them when I was visiting in Ohio. :)