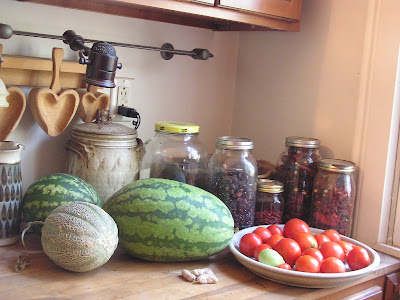 The late September rain did wonders for our asian eggplant.  I picked a dozen one day, and used all but two in a dinner of Pasta Norma, using our garlic, onions and herbs.  The eggplant tops went into the broth bag.  I picked a basket of winter greens (a mix of turnips, mustards, etc), and made winter salad, chopped some greens for the pups dinner, & fed leaves with holes to the chickens.  Redeemed swagbucks points for a $25 Amazon gift card.  I began working with J on gluing the antique wardrobe back together.  We did one area first thing in the morning, another area in the evening, and will keep working on it until everything is properly back together.  I checked the Walgreens sales paper, & made a list of things needed.  I shopped there for the sale items, & found a few things on clearance, including a couple of items for my shoebox.  The remaining items were cards needed for upcoming special days.  All along, I thought I'd been getting 20% off their cards on senior day, but found out greeting cards are not included, so that's a frugal fail.  In the future, I'll try to get most cards at Dollar General. 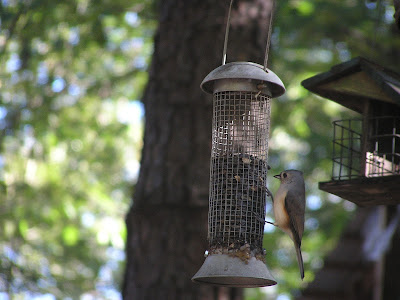 Our Aldi's has closed for remodeling, and I'll miss it these next few weeks.  I took an online class needed for license renewal, which was a freebie given with a class I took in August.  Though smaller than they were during peak season, I continue to pick tomatoes.  Wanting to beat the rain from hurricane Matthew, I picked another basket of crowder peas, 2 watermelons and a cantaloupe.  I've spread the peas on a blanket on the floor to finish drying.  I harvested okra, and a few carrots, some of which were grated for the pups dinner.  There were only 2 eggs in the fridge when we returned from the coast, but as they've built back up, I've started giving one to the pups for breakfast.  J has seen a hawk flying low near the chicken pen a few times, which we assume is the one that got our chicken last week.  He shot nearby to discourage it from hanging around here.  On the way back from taking care of some business in town, I stopped by a local orchard looking for small pumpkins or gourds to decorate with.  I found a pretty gourd, but it was going to cost nearly $6 once they weighed it, so I left it there, and found out they had given away all their small gourds and pumpkins to customers a couple of weeks ago.  I'm sorry I missed that, but will try to remember to look for their announcement next year, as it seems they do that each year.  I did purchase a few apples, which are delicious.

Before the rains arrived from hurricane Matthew, I did three loads of laundry and hung them on the line.  I'd been wanting to wash the pillow covers, bed pad and covers, and did that.  I harvested another dozen eggplant, which were canned, and all the beets that were of good size, which were roasted over the weekend.  J wants to pickle some hot peppers, so I harvested a basket of those as well.  There was another basket of red noodle beans picked, which take up lots of room in the fridge, so I canned another 6 quarts.  I realized the season was soon ending, so made a sharp cheddar sandwich with some of our tomatoes and basil for lunch one day. A few years back, someone introduced me to using basil instead of lettuce in cheese sandwiches, and I love it.  The basil is on its last legs, so better enjoy it while I can.  On that note, I also made a caprese salad for a dinner, along with our okra, and beans & rice from the pantry.  There were some too large noodle beans, so I shelled the beans out of those.  I froze enough okra for 6 meals. 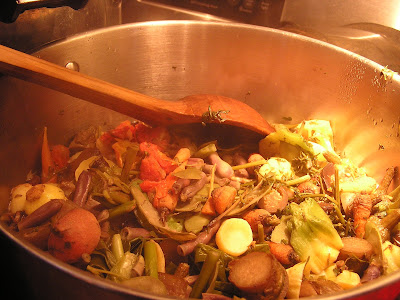 Bags of frozen vegetable trimmings were threatening to take over my freezer.  When I pulled them out, I had 7 1/2 gallon bags saved up, so I put them on to simmer in between working on the eggplant.  I also did something a bit different this time.  Having a couple stalks of celery that needed using, a couple recently pulled carrots, & one of our onions, I made a mirepoix and added that in.  Two stock pots were needed for simmering this time, as I'd been saving vegi scraps since early spring, waiting for cooler days to make broth.  I'll be happy to have more jars of broth on the pantry shelf.  This was the first time I tried a double layer of pint jars. I read about it a while back, checked my canner manual, then ordered another rack so that I could do it.  It worked just fine.  One out of 13 jars did not seal, which sometimes happens.  I made zucchini soup yesterday, and used it then.  I found artichokes 5/$5 at the grocery store last week, and prepared them to have along with the soup, along with homemade bread I had frozen.  I did some online holiday shopping over the weekend, going through ebates or swagbucks for cash back, and researching best prices.  I finished shopping for one family member, finished most of it for two others, and bought supplies to make a handmade gift for another.

Here's a peek of the wardrobe I'm working on.  The recent days of rain from the hurricane slowed progress, but I hope to be back at it soon.  Our rain gauge had over 4" of rain in it yesterday morning.  My thoughts are on so many who are in flooded and damaged areas, those who still need safe haven and those who are working to clear roads, restore power and provide rescue from flooded areas.  Our forecast has the first nights in the 40's, so yesterday I brought in all the orchids, lemons, avocado and moringa.  The poor moringa was flung off the porch during the winds, both the pot and main stem broken.  It's been repotted and given lots of tlc, but I won't be surprised if it doesn't recover.  Oh well, the gardener in me says there's always next year.  I'm joining in with Frugal Accomplishments.

we enjoyed eating from your garden while you were gone... I'm enjoying the cooler temperatures- but Matthew was scary!

How great to hear that you are still enjoying fresh fruits and veggies from your garden! I too am sad that Aldi is closed for a bit, but excited to see what new products the expanded store will bring.

The cooler temperatures are lovely, Meredith. I hadn't really thought about it yet, but you're right, Michele. Now I'm excited too!

I love that thought: there's always next year.

I am reading through your last several posts, catching up, and I just have to say it (again): I absolutely LOVE your photography. You have such a great eye and I feel like I am right there experiencing what you are seeing. Your blog is such a peaceful respite.