Singing in the Bathtub with the Dogs 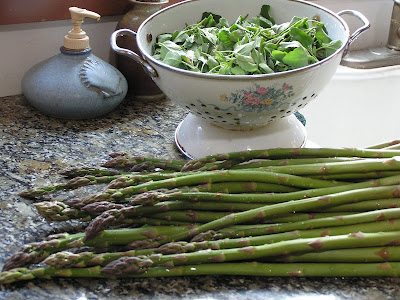 The birds have kept me filling their feeders this week.  There has been more hummingbird activity, but  I haven't seen more than one at a time, so I can't be sure it isn't just the same one right now.  The dogs had baths yesterday, and seem as though they're getting used to it.  I just praise the heck out of them, sing loudly made up songs to them, bless their hearts, and use my homemade dog shampoo.  Hickory used to think the suds were pretty tasty, and would lick them off almost as soon as I would soap him up.  He also got to where he would just step into the tub when I asked if he wanted a bath.  Which is a blessing, when you're dealing with a Great Dane mix.  I hope these two will follow suit, but in the meantime, I'll just make it as fun and positive an experience as I can for them.

The potatoes have started to sprout in the garden.  One of the newly planted tomatoes was bitten off by a cutworm.  There's some justice, as I found him and fed him to the chickens.  I hope he was an only child.  My tastebuds were happy last night, with asparagus soup.  The recipe I use is from homesteader extraordinaire, Carla Emery's The Encyclopedia of Country Living.  Though she is no longer with us, her light still shines brightly, showing the way for old and new homesteaders.  Borrow or buy the book if you can.

Cut about 1 lb of asparagus in one inch pieces.  Cook with a little salt in 1 quart of water (or stock) until tender.  Make a white sauce by stirring 4 tbs flour into 4 tbs melted butter.  Add to soup along with 1 beaten egg yolk and a dash of cream.  Serves 2.

I always run mine through the blender.  If you use storebought eggs, you probably will want to cook the egg yolk a bit after adding it to the soup.  I don't worry about it, using eggs from my own, healthy chickens.

I'll be at the Celebration of Spring Kiln Opening at Whynot Pottery this weekend.  If you come out tomorrow, you may have to dodge a storm or two, but Meredith's cookies are worth it.  Sunday promises to be a calmer day.  Hope to see you there!
Posted by Laurie at 9:00 AM

an only child.... you made me laugh!
Those are two very luck puppies to have you as there Ma.
And those asparagus we ate everyone in the pan.
They were tasty!
See you soon we are moving you all into the work building on sat- sunshine on Sunday!

I just spent awhile reading back and catching up on some of your recent posts. The background music is so relaxing and there were so many good recipes that I lost track of time. Your new puppies are so cute! I'm bad about giving our one small dog a bath let alone two puppies that will grow very big.
I'm looking forward to seeing more of your new pond.