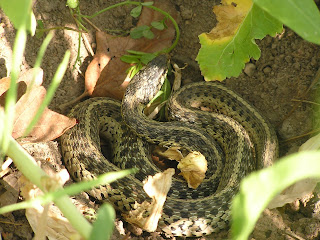 WARNING: slithering photo! It's been an interesting time here since yesterday, with all sorts of creatures showing up and one disappearing. A week or so ago, J created a chick daycare so they could be out in the fresh air & sunshine during the day, and able to scratch in the dirt. It's basically a fortified dog lot. I keep an eye on them out the back door, or from working in the garden, and every hour or so, go there to make sure all is well. I had been in the house, quietly painting, trying out a simple batik method I learned of recently here. When I went out to check, the Delaware chick was missing. No sign of her, no feathers, no noise, just gone. I'm thinking a hawk may have gotten her. The lot is under a tree, and partially, though not totally covered by tin. She was 5 weeks old, so I'm thinking too big for a snake. I immediately got the other chicks in the house. As soon as I went to check on the older hens, who were free ranging around the garden & orchard, I saw a black lab at the edge of the woods, and one of the hens came running towards me with her tail feathers missing, as well as a wound. I don't know the dog, but it had a collar on, and you can bet I'll be keeping a close eye out for it, as well as the camera handy. I think the hen will make it. I've been giving her lots of greens to help with clotting, and clabbered milk to give her extra protein for wound healing. She's talking to me a bit, though moving slowly.

This morning, I noticed Famata kitty had a rodent. We've got lots of moles here, as well as mice. She was doing her feline homesteading duties. When I had finished harvesting asparagus, I saw Callie jumping around in one of the greens patches. When I got closer, I saw she was tussling with a snake. She's the smallest cat, but I think the most fearless. You just never know what will show up when you're living in the woods.
Posted by Laurie at 10:41 AM

oh- its fun living in the county!
Different kind of watch where you step!

A Friend Across the Miles said...

And the dog? I'm sorry that happened to one of your Ladies - how humiliating for her...chicken buns to the sky!!!