Hello, friends.  Last week, J & I took our long awaited trip to the NC coast.  Before we left, I froze figs, green beans, eggplant and tomatoes, and J planted the beets I started from seed.  Hopefully, they're large enough to not get eaten, unlike the ones I started in the ground.  I've begun saving seeds from the purple podded pole beans.  We brought food from home with us, and I made hummus to take for my lunches, to have with our sweet peppers and cucumbers.  I requested several books from the library, and took two with me on vacation.  Dinners brought from home included rice and butter beans with sauteed tromboncino, fried potatoes, peppers and onions with salad, and pesto and pasta with salad. 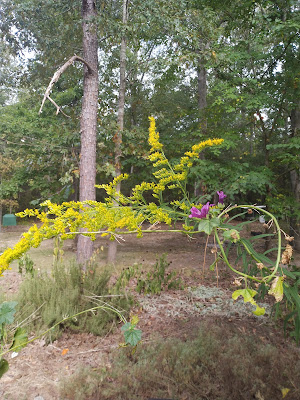 Though I love our little room and kitchenette at the beach, the kitchen has just the bare basics.  Being a vegan, gardener, and homesteader, I spend a lot of my life chopping vegetables, and a knife that isn't much better than a butter knife makes me a little crazy.  I laughed, thinking we are "those people", who bring our knives with us on vacation.  We brought a 5 gallon bucket of lima beans, and another of field peas with us to the beach.  We shelled the lima beans the evening we arrived, and enjoyed some for dinner that night, with rice and squash.  I got another laugh wondering what our housekeeper would think of our trash can filled with bean shellings.  Bet they don't see that too often!  We both did a lot of reading, on the beach and the balcony. 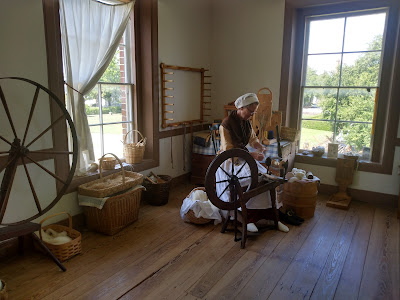 We shelled the peas another evening, and occasionally lost one down between the balcony floorboard cracks.  There were men sitting outside on the floor below, and we wondered if they even noticed.  Their talking never seemed to skip a beat, so hopefully not.  We did our usual thrifting one day.  J found lots of work clothes, which he sorely needed... pants, warm vests, and thick flannel shirts.  We took a day trip to New Bern, the original NC capitol, and enjoyed touring Tryon Palace and gardens, the original governor's home.  There are things we weren't able to see that day, and would love to go back.  I didn't think to take photos in the palace, and all of these are in the Kitchen building.  I have an affinity for old historic sites, and really enjoyed touring it.  We also thrifted there, and I had better luck, finding some canisters to turn into compost crocks, a lovely set of handmade cards, and a large zippered bag of cross stitch fabrics for $5.99.  I purchased a pattern for a gift some months ago, and needed fabric for it, so I should be covered, and may end up selling some fabric to recoup my cost. 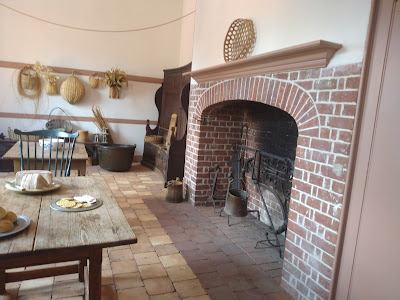 We had planned to eat dinner out three nights, but with the meals being disappointing, not to mention much more expensive this year, we decided to skip the third night.  There was enough left to make another meal of potatoes, peppers and onions, and salad.  After we got home, I did a cursory pick of the garden, and found quite a few Black Swallowtail caterpillars on the parsley.  J did a last picking of the peas, and disced them in over the weekend.  He also began tilling in the sweet potato vines, and came up with a great idea for the winter.  I've been using sweet potato leaves in my morning smoothie, as they're such a mild green.  He suggested I try potting one to overwinter in the house, and harvest from it.  While I won't have the quantity I have now, I'll be glad to have some fresh, mild greens to harvest over the winter, and will definitely try it. 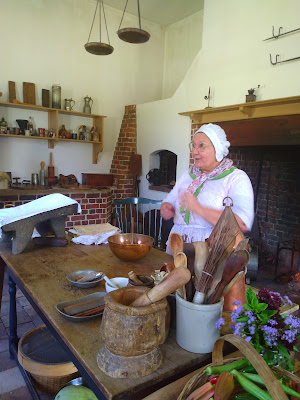 After getting home on Friday, I made an easy pasta meal, using our herbs and veggies.  On Saturday, I made lentil soup, which used some of the carrots I canned this summer.  A new eggplant recipe was tried on Sunday, which included tomatoes and chickpeas, and we liked.  While we were gone, I won a T shirt from an Instagram giveaway, and may use it as a gift.  With night time temps dipping into the 40's, I switched out the summer & winter linens.  The bed was stripped, and the mattress cover and pillow covers were washed along with the sheets, and all was dried on the line.  The winter quilt was aired on the line before replacing the summer one.  Though it's washed in the spring, it gets a bit musty smelling while being stored over the summer.  The mattress cover was coming apart in places, and was mended.  It's organic cotton filled with wool, and was rather pricy, so I want to keep it going as long as I can.  That's all I'm remembering at the moment.  Happy Fall, everyone!

How nice to get some time at the beach, and enjoying the old capitol of NC! Those kitchens were certainly busy places, and probably hard to keep that clean with fires going constantly in fireplaces.

I hadn't thought of the mess it would have created, but that's so true. It's hard enough keeping our house clean, while heating with a woodstove. Wood and ashes are quite messy!

So happy you were able to get a little time away. That's funny about the knives. And so true about spending so much time chopping veggies! Well, we are "those people" who bring a shower head with us. I can't tell you how many awful showers we've taken before we finally got smart and packed one. It sounds like you had a wonderful time and found some great deals!

Lentil soup sounds so good right now. I may have to make some this week. Don't you love the summer and winter linen switch out? I look forward to it at the start of both seasons.

I can understand taking a showerhead! Some places are abysmal. Yes, I do enjoy changing out the seasonal linens. Hubby hasn't yet wanted me to switch to flannel sheets, but that will be coming soon. Have a cozy week!

I love visiting the old kitchens and always marvel at how clean they are nowadays. It couldn't have been like that back then. They must have been like the Amish families' kitchens I have popped into. They are full of males in from the fields eating a hearty meal, ladies busy cooking, canning (outside on the back porch), and washing dishes while children and babies crawl underfoot. They were crowded but jovial. No one minded or even noticed the crumbs on the floor.

Instead of potting up a sweet potato, try rooting one in water. Might be easier. I dehydrated the leaves one year to sprinkle in smoothies but forgot to label the green powder. I kept smelling it thinking it was an herb but there was no scent. Eventually threw it away and only remembered what it was later when I went looking for it.
Jeannie@GetMeToTheCountry

That must have been an experience, being in an Amish kitchen. I'd love to be a fly on the wall and observe. I thought about rooting a sweet potato in water, but wasn't sure it would last through the winter? I potted up three last week, and if they don't do well, I'll try that next. Thanks!

Inside the Amish kitchen was a woodburning stove that was not going since it was summer and they were using the one outback. It was missing a dishwasher and the electric appliances sitting on the countertops but that's about it. The valuable lesson I learned is that they are just like us only there are more of them.

The sweet potatoes I rooted in water did make it through the winter since the vines got their nutrition from the potato. They never got really bushy or long since my laundry room doesn't get much sunshine.

Interesting. And that's great to know about the sweet potatoes. Thank you!