Making Use of Our Homegrown Produce 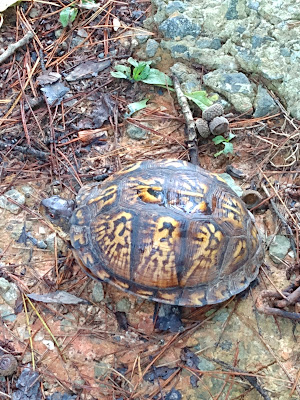 Hello, friends.  Though there's still plenty to do, the garden is showing signs of slowing down.  Last week, I prepped and froze pawpaws, and froze tomatoes.  I made onion powder from dehydrated onions, and dried another round in the dehydrator.  Early one morning, there was a box turtle hanging out in front of J's shop.  They had the prettiest shell markings.  I'm always cheered to see them visit us.  I harvested squash, tomatoes, cucumbers, apples, butter beans, cowpeas, eggplant, peppers, pawpaws, and green beans. 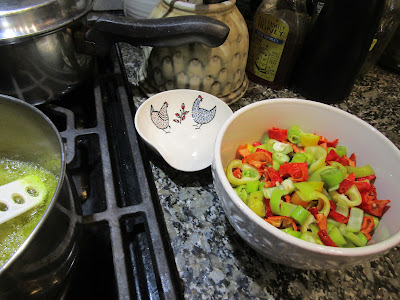 I made a small batch of cowboy candy with the gifted hot peppers, using a Jackie Clay recipe.  There were quite a few ghost peppers in the bunch, which got both J & I coughing.  Hopefully, they didn't make the cowboy candy unbearably hot.  I guess it depends on who's eating it.  Though I've shared it here before, I thought it was worth mentioning Disappearing Zucchini Orzo again, in case any of you still have plenty of squash to use up, as we do.  I use at least 2# of squash per recipe, use GF orzo, leave out the cheese, use homegrown herbs, and substitute tromboncino for zucchini.  It is tastier with the cheese, but we do what we must, and it's still pretty good.  Sweet potato slices were dehydrated for the pups, which finally used up all of last year's potatoes. 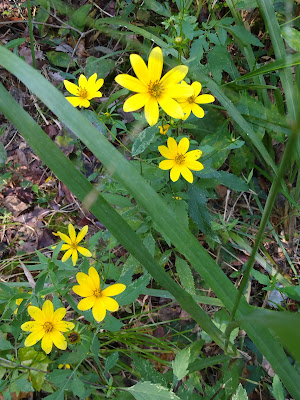 I harvested the first of the mature tromboncino, as their vines had died, and plan to use them grated for dog and chicken food.  Two of the mature cucuzza squash were harvested, and I've begun feeding the dogs and chickens with one of them.  Still having plenty of jars of canned green beans, I froze some this time, and also froze more figs and tomatoes.  I shared squash with J's two coworkers twice.  Honeydew and watermelon were enjoyed as late summer treats.  Some were shared as well.  We'll be enjoying these last precious days of summer, until the Fall equinox this coming Thursday.  There are 40's in the forecast the following day, to bring in cozy Fall days.  I hope you're well, friends.

Yes, it sure feels like fall is fast approaching. And isn't it welcome?! You are still harvesting quite a bit.

Yes, I am looking forward to fall! Hope you have an enjoyable week too!

Our Oliver loves sweet potatoes as well. We were the lucky recipient of a couple of fall-like days last week but we're back to humidity (but at least lower temps). Our humidity should drop tomorrow some time and we will also be receiving cooler temps later this week. I'm SO excited!!

Our garden has also slowed, although I just saw 6 cucumbers coming quickly on the one vine I have left. I was pretty happy to see it! And our green beans have begun producing again. Hooray!

The box turtle is beautiful. Thanks so much for sharing the orzo recipe - I'm still harvesting zucchini and will give it a try!

I was thinking of you when I shared the orzo recipe! Hoping the last of the temps in the 90's is this week. It's looking to be cooling down afterwards. I hope yours does too.

The flavor of my last watermelon was bland but we choked it down anyway. I tried something new that worked out well. I took the vegetable slicer you recommended and peeled the outer green skin layer off leaving only the white rind. Then I chopped the white rind into small pieces and sauteed it in stir fry. It absorbed the flavor of the other vegetables and tasted fine. No one knew what it was.

Bill claims we would have more compost if I stopped feeding the scraps to him.

Now that's a thought. I'd read of pickles from the rind, which didn't appeal, but this sounds like a great use of something that would go to waste... or compost. Bill's a funny guy!

I LOVE the turtle photo!

I am catching up on reading a few blogs; it has been an unusually demanding time on other fronts. I always relish your photos; they are very restorative and just what I need.