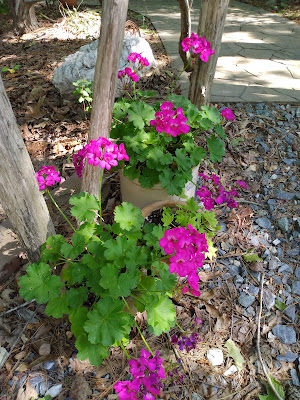 Hello, friends.  Last week, I repotted lettuce, and harvested cucumbers, yellow squash, figs, blackberries, blueberries, lambs quarter, eggplant, tromboncino squash, and oregano.  I planted the last wintersown coleus, and several cypress vine seedlings in the ground.  The next day, I planted zinnias started from seed in a pot to cheer me when I drive in.  I got back into working on my friend's antiques, and did 10 listings on ebay.  Two items sold, which is more than my recent track record.   I just really need to get all of it taken care of.  Thankfully, there's not much left of it now.  There was no indication of color when I bought the marked down geraniums above, and I couldn't be happier with what showed up.  The photo below is of the pond garden.  Left to right, there are winter squash, winter squash & watermelons, cantaloupe & honeydew melons, Dixie Lee field peas, and tomatoes.   The space between the melons and peas has been cover cropped with buckwheat and phacelia.  In the distance is the pond, which we use to irrigate this garden.  In the foreground, you can just see the old truck tool box we use to start some seedlings.  It was a cloudy day, so looks a bit dreary, but it's usually a very sunny spot. 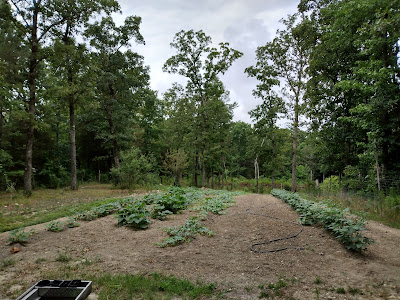 On a cooler day, I cut up all the "need to use first" potatoes, made mashed potatoes with mushroom gravy, and made cucumber salad.  I let another neighbor know we had lots of cucumbers, and she stopped by after work.  I worked at the gallery again on Saturday, and brought the owner some more cucumbers.  I was happily surprised by a $1/hr. raise, which really helps with gas prices these days.  While in our small town picking up something for J, I shared cucumbers and an elderberry I had potted up with a friend, and stopped by the little local grocery store.  I had hoped to get an avocado, but at $2.99 ea., I left it there.  They did however, have limes for .29 ea. and lovely cilantro for $1.29/bunch, and I got three of each.  They also had two cartons of mushrooms marked down to .99, so I got those too.  The next day, I canned our smallest potatoes, adding 24 pints to the pantry, and got a few small jars of mushrooms done at the same time.  The timing was only 5 mins. longer for the mushrooms, and the second canner load wasn't full of potatoes, so that worked out well. 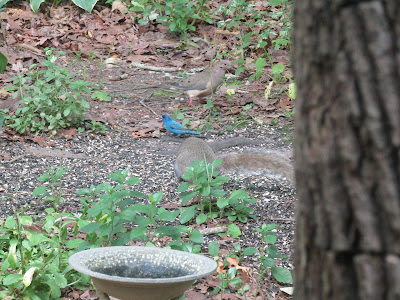 While at the sink one day, I noticed a vibrant blue bird.  Grabbing my camera, I managed to get a photo, and was delighted to find it was an indigo bunting.  Though I see them in the area, usually at the side of the roads, I don't remember seeing one under the feeders here before, so that was a real treat.  Golden paste was made for the pups, and also food for the hummingbirds.  I harvested kale, basil & parsley, and made a double batch of kale pesto, which went in the freezer.  The parsley and chard were weeded and fed with comfrey tea.  The rest of the kale went in a new to us salad.  Our potatoes and the first tromboncino were used in a MM zucchini tot recipe, and our figs, blackberries and blueberries were used in a fruit salad, with grapes and a nectarine that needed using.  Another night used our tomatoes, garlic and herbs in pasta sauce, and cucumbers, carrot, and tomato in a salad.  It's good to be eating more of our garden produce again.  We visited my MIL on Sunday, and don't have any big plans for the 4th, though we're thinking about trying out a vegan ice cream recipe, made with fruits, coconut milk and honey.  It sounds like it should be good.  Whatever your planning for the 4th and the week, I'm wishing you an enjoyable one.

It's such a wonderful feeling to be able to grow what you love. I made a shepherd's pie which included our own potatoes, carrots and garlic. It'll feed me for a few days quite nicely.

I hope you got some of that glorious rain yesterday! We got 2"! Everything looks so happy out there today.

I will be making deviled eggs (a family holiday tradition) and a maple syrup-sweetened sweet potato pie today. Enjoy your goodies.

Have a safe and tasty Independence Day! God Bless America!

No rain here yet, but we keep hoping. That sweet potato pie sounds wonderful, and my husband would love it. I may have to add that to my plans!

So much goodness you're harvesting and so kind of you to share the bounty with others. The geraniums are beautiful! So cheery. I have admired your beautiful garden space for a while. It's lovely even when the weather makes it appear dreary.

I hear you on the avocado - it's difficult to justify paying that much for one. They are high priced here right now too. The watermelon pricing has been ridiculous this year too. Congrats on the pay increase! Such a nice surprise.

I hope the dairy-free ice cream was delicious. The ingredients sound yummy!

Happy 4th and have a wonderful week!

Aren't the geraniums a pretty color? We just don't eat pickles like we were, and there are still quite a few jars on the shelf, so I'm happy to share cucumbers. Of course, the pups and chickens are enjoying them too. We've been lucky to find some good deals on watermelons, and decided to have that yesterday, instead of the ice cream, but will try the recipe another day. Have a lovely week!