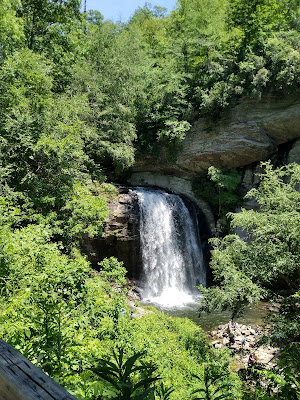 Hello, friends.  Last Sunday, I left to visit my niece in Asheville.  Between mid-afternoon Sunday to Monday afternoon, we took five hikes, including two to waterfalls.  For scale, look closely at the rocks on the right for people.  We had a lovely time.  North Carolina surely is a beautiful state. I gathered an oak gall and a little bit of usnea on our hikes.  There was lots of usnea, but our hikes were my focus.   After our first hike, we went by the farmer's market, and I picked up a few things for dinner Sunday.  We also did some thrifting, and I brought home a lovely pair of linen shorts.   When I headed towards home Tuesday, I stopped by a nearby discount grocery I'd found online, only it wasn't truly a discount grocery.  Most of their stock was regularly priced, and some was even higher, such as a 2# bag of organic apples for $7.49.  They did have GF chips for $1.49, and I got a couple, but overall, it was a disappointment. 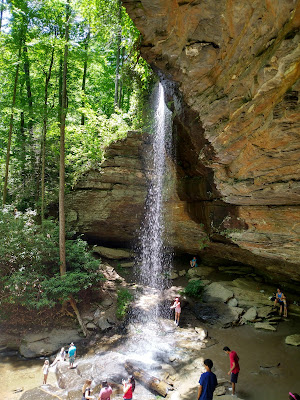 I'd offered my niece my old juicer, which she was happy to get.  That worked out wonderfully well, as I could make my celery juice each morning while there.  I planned ahead, and was able to stay on the MM recommendations during my visit.  Between the produce I brought, and what was gotten at the market, it was pretty easy.  I prepared smoothies and cut up apples for the drive each way.  On Monday night, my niece suggested a curry house downtown.  I wasn't sure how much I liked curry, but they had two that I could eat, so off we went.  It was delicious!  I'm still thinking about it.  I had a Thai Panang curry, with veggies, coconut milk, lime juice and peanuts.  So good!  I've already found the Panang paste, and plan to attempt to recreate it at home. 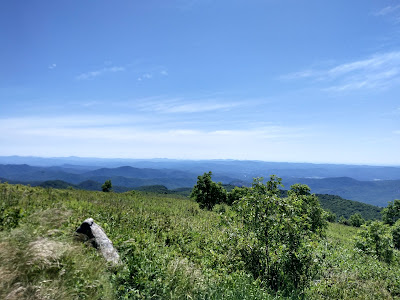 Two loads of laundry were hung out to dry outdoors.  The cucumbers have started bearing, and are bountiful.  Several were shared with two neighbors, and some were shared with the owner of the gallery I worked at on Saturday.  I pulled two bags of frozen leftovers to take for my lunch at the gallery, as well as water and fruit.  I tried a MM recipe for Spicy Cucumber Chips, which we liked.  I'm happy to find something to replace the Asian cucumber side I usually make each summer.  There were two store bought onions going bad, so I salvaged what I could, dehydrated it, and added it to the soup mix jar.  I harvested cucumbers, mulberries, black berries, figs, a yellow squash and a small eggplant that something had started chewing on.  We're getting quite dry here, and are very much hoping for the rain in the forecast on Monday.  The chickens are getting a chopped mash each day, and rewarding us with eggs.  I used diluted comfrey tea to feed lots of flowers and landscape plants. 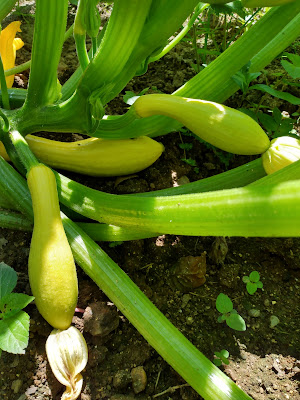 J harvested the onions that were ready.  They're larger and nicer than previous harvests, which is nice.  He planted two cover crops on currently unused areas of our main and pond gardens.  The cover crops he used were phacelia and buckwheat.  Besides building our soil, both of these will also support pollinators.   After our potatoes had dried on the ground for several days, J & I sized them.  I brought a basket of the smallest ones into the house to can at a future date.  As last year, we spread them out on pine straw in small, medium and large sizes, J limed them, and then placed more pine straw on top.  They're then covered with heavy plastic, and they're within a dog lot which is covered with tin roofing. This system works better for us than anything else we've tried so far.  I used our first tomato in a salad Sunday, but it wasn't very good. J picked up a few Early Girl plants this year.  We're hoping it's because of the heat and dryness, rather than those tomatoes in general not being good.  Either way, they won't go to waste. 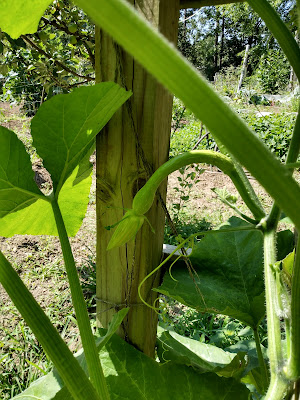 A few weeks ago, we were invited to an outdoor party this past Saturday night.  It was called a Gratitude Fest, and was a small gathering of around 2 dozen.  It was so nice to be out among a gathering of people, some old friends and also meeting some new.  We were treated to live music from an excellent musician, and then danced under the stars for the first time in a long while.  It seemed the quintessential summer night.  I'm grateful for many things, but family, friends and summer nights have to be up close to the top.  Though we'd originally planned our first cookout Memorial Day weekend, we were surprised to find a Carolina wren on a nest in the grill.  Everyone has now flown, so we finally were able to grill over the weekend.  I prepped potatoes and yellow squash with herbs, all from the garden, and made salads using our carrot and the tomato.  Wishing you all the gifts of the season.

Absolutely gorgeous (your hikes/walks). Refreshes me just to see the photos!

Love the idea of a Gratitude Fest. I too am grateful for many things, and that sounds like a wonderful way to share that gratitude with others near and dear to me.

I love the idea of a Gratitude Fest making it's way around the world!

NC does indeed look beautiful. Your photos are spectacular! I haven't seen waterfalls like that since we lived in Hawaii.

Bummer about the discount store. At least now you know.

It sounds like your garden is coming right along. Comfrey is a wonderful plant, isn't it? I've been planting it at the base of my fruit trees to assist in their nutrient absorption.

Such a sweet story about the wren. I do things like that as well. A small inconvenience to me to serve a sweet animal is worth it. Sometimes it drives my husband crazy, lol, but he's coming around.

I LOVE the gratitude fest. Sounds like a marvelous time. And kind of nice that it was a smaller group.

I hope you received rain today (and I hope rain helps your tomatoes - bummer when you don't get that delicious fresh tomato taste!). We received a nice amount this morning which I'm incredibly grateful for after a hot and humid weekend.

We are still watching and waiting for the first of our tomatoes, summer squash, and cucumbers, but we are continuing to thoroughly enjoy the greens, sugar snap peas, and radishes!

There is comfrey planted at the base of many of our fruit trees here too. It is a lovely plant. I love it when they're both useful and pretty. The Gratitude Fest was such an enjoyable evening, and it was indeed nice that it was a small gathering.

We're still waiting on the rain. Looks like maybe mid-afternoon at this point. My husband tried another tomato this morning, and said it was much better. Thank goodness, because that first one tasted like a grocery store tomato, which, as you know, isn't worth the trouble!

P.S. How wonderful to live in Hawaii! I visited twice, when I lived in LA in the 80's. It's so gorgeous there. Though I know, being islands, the cost of living is quite high.

Yes! I know you're well acquainted with musical gatherings yourself.

What a wonderful trip you had! I really need to get back to Asheville. Time away can be so restorative.

Your garden is doing great! We are getting cukes now too. I was away for a few days, but the garden looks good. The boys kept it alive while I was gone. Thankful.

What a great idea the Gratitude Fest is.

It was a lovely little getaway, and gathering too. Good job on your guys!

Your garden seems to be ahead of mine. I have only dug a few potatoes for meals. We picked our first cucumber and tomato yesterday. Everything seems to be waiting for a good rain to produce.
Jeannie@GetMeToTheCountry

I have been thinking about how you store your potatoes. When lime them, do you sprinkle a little over the top or do you roll the potato in the lime powder? Last year I kept mine in cardboard boxes in the basement and we ate them before they went bad. Hopefully, I will get more this year so I need to consider storing them better.
Jeannie@GetMeToTheCountry

We're also waiting for rain. It's been dry enough here, we're worried we're soon going to run out of rain water for our home. We just sprinkle the lime on top of the potatoes. I hope you have a bountiful potato harvest.

I searched in the back of the shed and found an old bag of lime. I am thinking about putting them in dried grass in cardboard boxes, sprinkling lime over them, and then storing them either in the basement or the garage. They are the flat stackable strawberry boxes from Aldis. Bringing dried grass and lime into the basement is going to be a mess but food is getting too important now to risk losing anything. We haven't dug them yet since it has been dry. I'm hoping for a good harvest.

We understand the worry about water since we are on a well. I hope you get a good rain soon!

Thanks for letting me know how you do your potatoes.

Jeannie, that sounds good. If you can keep them in a single layer, that would be good. We're dancing with joy, as we got 1.5" of rain this evening! Our water tanks are looking much better, not to mention the plants.

We are dancing too! I awoke in the middle of the night to lightning flashing in the window. We got enough to leave a small puddle on the sidewalk. I'll take it! Hopefully, it will continue moving on to your place.
Jeannie