The Last Sweet Days of Summer 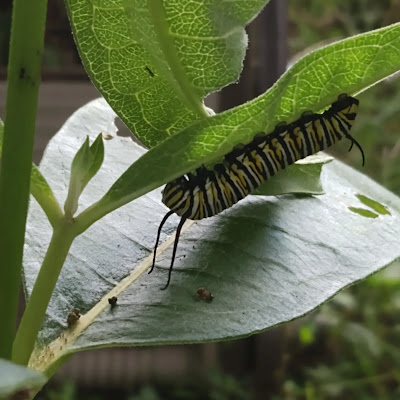 Hello, friends.  Seeing this monarch caterpillar on some of the milkweed made me smile.  Last week, lemon balm was harvested to finish filling an already started jar of glycerite.  I gathered more stems of dock seed, and dried them for future baking.  Three trays of figs were dehydrated.  I'm thinking of baking fig bars during the cooler months, and came across a healthy, GF recipe I can use.  For several weeks now, I've been gathering hickory nuts as I come across them.  The best place is our driveway, as the vehicles run across them, and take the outer husk off, so each time I go to the mailbox, I gather some.  There are still some from last year I've not used, but they'll last a long time in their shells. 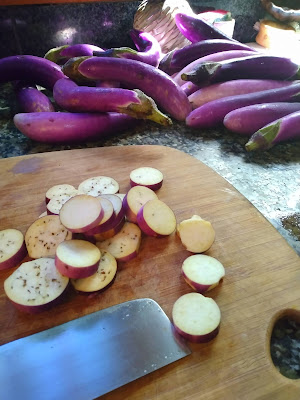 On Tuesday, I canned eggplant.  If I have more eggplant bounty, I intend to make caponata with at least some of it.  On a roll that day, I went ahead and canned up yellow squash too.  It felt good to catch up with those.  I also prepped the noodle beans, some while watching the canner.  All the end bits went into the vegi broth bag, which filled the 4th gallon bag.  Soon I'll need to be canning broth.  On that day, I was on the 9th and final day of an advanced Medical Medium cleanse.  I was worried my energy might be low, because on this final day, only liquids were allowed.  It turns out my energy was great, which has been the case throughout the protocol I've been doing, which tells me I'm on the right track in supporting my health.  My weight has dropped to 100, the lowest I've been in, well... decades, but still a good, healthy weight for my height.  I continue walking daily with the pups for exercise. 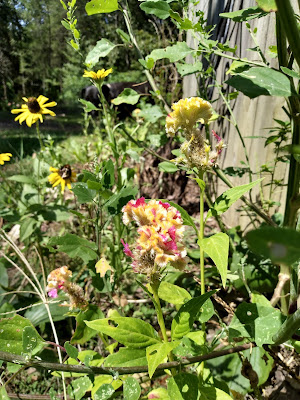 On Wednesday, after painting orders, I canned noodle beans, and froze red pepper.  Another day, I cut and dried several sweet peppers.  The ground is still quite dry here, so it has not been a stellar mushroom year.  Still, I found a few more small chanterelles on my walks and dried them too.  A juicer I tried, but didn't work for me, was returned to Amazon.  The tomatoes in the garden are pretty much done, but I'm still harvesting figs, eggplant, cucumbers, peppers, the last pawpaw and noodle beans.  The yellow and tromboncino squash are slowing down, but we're still getting a few of those.  Herbs have been harvested for meals, including basil, oregano and chives.  We enjoyed our watermelon.  I saved the seeds, and harvested our last one.  Our little home goods business has been booming, and we're looking forward to a little break.  Enjoy these last few sweet days of summer, friends.

That monarch made me smile as well. We have so many this year!

So, are you thinking that GF is going to be a lifestyle for you now? I know I have eliminated gluten from my diet. Although my hands have been quite distressed in the last two weeks. Hope you continue to find healing in your dietary plan.

Enjoy these last few days of summer. I will be happy to welcome in the autumn season. ;0D

I'm still navigating that. I know when I tried to minimally broaden my
diet after the 90 days, the eczema started returning. I'm hoping I can tolerate some of the ancient wheats, like Einkorn and Red Fife, but I'm figuring it out as I go. Ideally, I can enjoy those in a few things, mixed in with GF as well. It's an adventure.

I love that caterpillar. You got a great picture of it.

I am amazed at all the eggplant. That is something that I don't grow here in my garden. The very few times I've tried it, it didn't grow. Neither does okra and melons are hard here. We have lots that does grow well, so we enjoy that, but it's great to see what other people have success with in their gardens.

Melons are a challenge here too. What we have this year are from a volunteer. Gotta like them. I've seen what you've harvested and preserved. You grow quite a lot in your backyard!

I have never canned eggplant and would love to hear how you do it. I always grow just one or two plants since I didn't know how to preserve them.
Jeannie@GetMeToTheCountry

Jeannie, here's a link re: eggplant canning. I hope you like it.
https://abelabodycare.blogspot.com/2011/07/you-can-can-eggplant.html