A Trip to the Coast 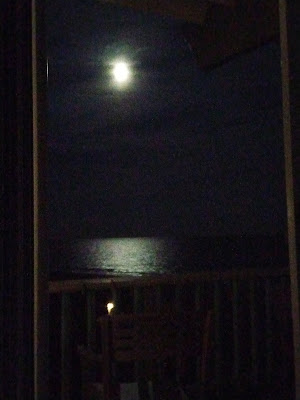 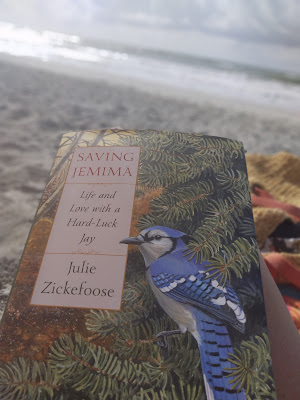 Hello, friends.  Last week, J & I took a much needed break, and headed to the coast.  I brought a library book, and finished it, The 100 Years of Lenni and Margot, which I enjoyed.  I also brought a copy of Saving Jemima.  I'd been holding on to it, waiting for vacation to read it.  It was also an enjoyable read.  Several magazines, a Netflix movie and another book from home were also packed.  All breakfasts and lunches were eaten in our room (with kitchenette), and 3 of the 6 dinners.   We tried a new to us place for one dinner, which ended up being the best meal of all.  We'll be returning there.  Some food was brought from home, including our last watermelon, and some was purchased at the grocery store. 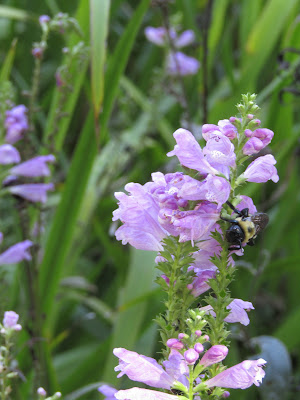 We did our usual thrifting rounds, but did not find as much as in years past.  J found two pants, a shirt and two books.  I found a winter shirt, two linen shirts, a skirt, sheets, a pillowcase and two books.  Another thing I found was a box of artichoke steamer stands for .25.  After purchasing two artichokes, I realized I had no way to steam them there, so this was perfect.  I'd never known there was such a thing, but it worked well, other than not being able to put the lid on fully.  The largest pot provided in our kitchenette was not very large, needless to say.  I brought a good knife with me.  Next year, I'll also bring a steamer basket. 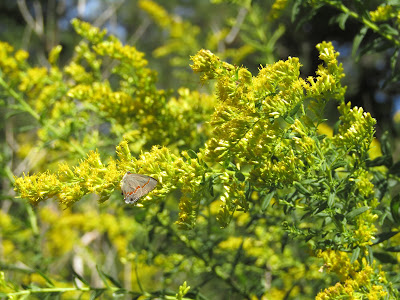 The garden had been picked pretty well while we were gone, so there wasn't the usual harvest needed when we returned.  I harvested a couple of yellow squash.  There was a small tromboncino the borers had gotten into, so I cut off the wormy parts and grated it for the pups dinner.  There were two cucumbers, and a couple of small, sad tomatoes, and I picked the first lettuce.  A few muscadines were harvested in the past 10 days.  There are plenty of noodle beans, but there are still a good amount in the fridge, so I don't feel the need to harvest more.  J decided to clean up the garden on Sunday, so the noodle beans are now gone.  I can't say I'll miss them, lol.  Two loads of laundry were hung on the line the day after we returned, and I finally got around to working up a bed and planting carrots, beets, chard and lettuce.  It's very late, but you never know what the weather might do.  The goldenrod is blooming profusely.  I decided to gather some to use for dyeing.  Several pieces of cotton were scoured, and a pot of goldenrod started.  The first round of plants did not turn very yellow, so I gathered two more rounds, added them to the pot, and I'll let it sit overnight.  I'm so enjoying these cooler days and nights.  Wishing you beautiful days.

I harvested my first Tromboncini!!! I only got one but it has taken me three tries to finally get a harvest. I left it on the vine until it was very ripe. I will let you know when I cook it as to what I think.

Oh, great! I hope you love it. So, did you leave it on until it was orange? We only do that for saving seed, as what we tried was tasteless. But we do love it as a summer squash.

Oh no. I did it wrong. I left it on the vine until it was orange and the vine was almost dead so it would be good and seasoned. It looks like I messed up; regardless, it will be eaten. I will save the seeds and try again next year.
Sigh. Back to the drawing board.
Jeannie

Jeannie, it's possible yours will taste better than ours did, there's such difference in soils and such. Gardening gives us plenty of opportunities to learn, doesn't it?!