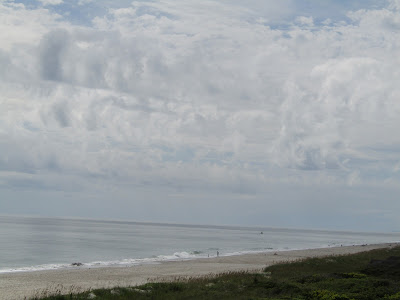 Hello, friends.  Last week,  J & I had our annual trip to the coast.  I brought food for all our breakfasts, all but one lunch and half of our dinners.  We did pick up a handful of items at the store when we arrived, to supplement.  The first few days were chilly and quite windy, so a lot of reading was done, and of course we thrifted while there.  J found 6 pairs of work pants, including several brand new ones, and some great shirts, including a like new Woolrich flannel, as well as a beer making kit.  I found a skirt, two dresses, two shirts, a cashmere sweater ($2.99), and five canisters to turn into compost crocks.  The skirt was silk and linen, and one of the shirts was 100% linen.  I think they were $3 ea.  I also got a few sewing supplies, and three cotton sheets.  We'll use one, and the other two are for dyeing projects.  I returned to a pet store where I'd gotten the pups Gorilla chews last year.  They were a big hit, the chews were significantly less than amazon, I expect due to shipping costs, and I was able to support a local business.  They lasted many months, which is saying something with McNibs, so I was happy to find them again.  Next door to the shop was an antique store, where I found a glass refrigerator dish for $10.  I've almost replaced all my plastic food storage dishes now. 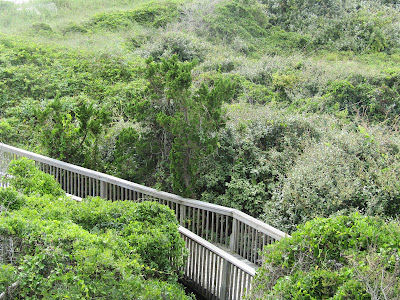 We just love our little getaway, which sits in the maritime forest.  That's the view outside our door, with the ocean beyond, and there's an ocean view from our balcony.  After we got home, I picked 25 figs, 5 eggplant, and a few other odds and ends.  I'd asked J for sweetfern plants for my birthday, which came while we were gone.  Over the weekend, we got them in the ground, along with plants we heeled in in the spring, which were oregon grape, buttonbush, false indigo and a service berry.  We also moved a black currant and wild indigo which weren't happy, and transplanted a couple of hazelnut volunteers.  Hopefully, they'll all settle in well.  I found some more wild muscadines, and gathered them.  Some more eggplant, winter squash, tromboncino, figs, pears, a few tomatoes, and cucumbers were gathered, as well as the first of the black eyed peas.  Most of the fall garden is coming along nicely, but only one of the three varieties of lettuce germinated, in two different places.  None of the seeds were very old, so it's surprising.  That's gardening for you.  You just have to be grateful for the successes.  Two batches of cotton cloth were scoured and hung on the line, for future dye projects.  J caught up our laundry, after vacation, and hung it on the line.  Wild hickory nuts have been gathered on my wanderings. 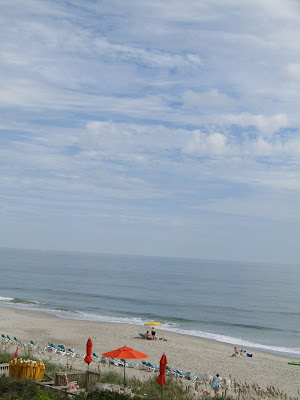 In researching plantain seed, I learned it's related to psyllium, and has a laxative effect.  That's not needed in our household, so I'll probably feed it to the chickens over time.  I did end up finding a few dock seed heads, gathered them on a foggy morning, and hung them on a line under the porch, to dry a bit more, with a plan to grind them and try them as flour at some point.  Eggs were boiled for the pups.  For a dinner, I made focaccia, which used our rosemary.  I made some infused garlic oil to go on it, and added oil cured olives.  I gathered lettuce for a salad, added our cucumber, and a tomato we bought at an organic market at the beach.  I had two half lemons in the fridge, and leftover garlic oil, so decided to make salad dressing, with some added sour cream, mayonnaise, salt and pepper, loosely based on a recipe online.  It turned out pretty good, and used a few things that might have been wasted.  We've got two olive trees hanging on, from a start of 10 or so.  We decided to put large stones on the north side of them, for some protection from the cold and wind.  J moved the first stone with his tractor, and placed it.  Several of the Meyer lemon seeds sprouted, so I'll need to get them in soil soon.  I hope you're staying well, and enjoying these first few days of autumn as much as I am.

It must have felt like such a luxury to be able to go on a trip. Glad you were able to get away and enjoy yourselves. Great bargains while thrifting, too! A favorite pastime.

Glad you are back safe and sound. Enjoy your week!

It was a lovely thing to do, in this very interesting year.

I miss the beach so much! We were only a 30 minute drive from the ocean when we lived in NH. I am glad you enjoyed your getaway.

I bet it's hard being so far from the ocean.