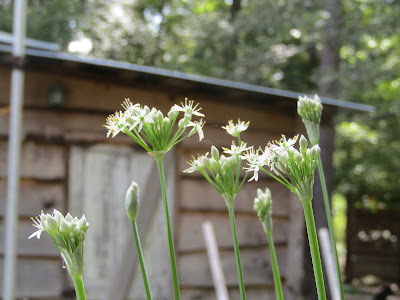 Hello, friends.  One day recently, during a pond sit, J & I were discussing all the wild dog fennel on the homestead, and wishing there was a use for it.  I did a bit of research, and found it can be used as an insect repellent, and well as a dye plant.  I gathered some, and put it in the hen's nest boxes.  It's soft and feathery, so I thought they might like it.  It turns out they do, or at least don't mind it, as they're laying eggs on it.  It also has a history of being used as a strewing herb, so I plan to use it in the chicken coop in that manner, both for insect control and aromatherapy.  How wonderful to find uses for something that is abundant here.  On Tuesday, I decided to take a day off from canning, and play with plant dyes.  It's very dry here, and I gathered what goldenrod I could find, but it wasn't a lot.  I've got fabric in it as I type, but it is not the brilliant yellow it was the last time I dyed with it.  I'm hoping the forecasted rain will encourage more to bloom. 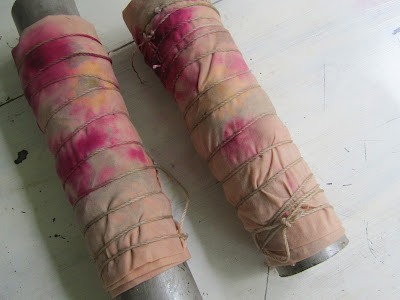 Next, I did my first experiment with eco-printing, and gathered dyer's coreopsis, beauty berry, dyer's chamomile, poke berry, raspberries that had dried on the vine, dog fennel, black-eyed susan, and a few sparkleberries, the majority of them still being green.  I decided to use the avocado-dyed cotton from my last dyeing adventure as the fabric.  J contributed pieces of stainless pipe to wrap the bundles on.  I hope it turns out well, as I have an idea for small gifts for the holidays using the fabric.  Several books were requested from the library.  I just finished reading The Book Woman of Troublesome Creek, which was a very interesting read, based on a family that had a genetic mutation which made their skin blue.  From the garden, I harvested noodle beans, apples, pears, pawpaws, peppers.  Laundry was hung on the line to dry. 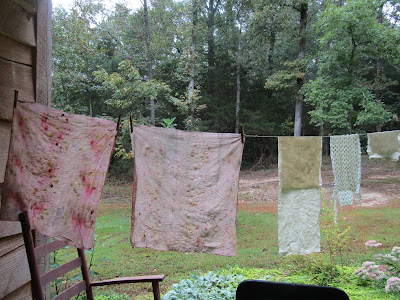 For a dinner, we had our butter beans with jasmine rice, and asian cukes.  Both the goldenrod dye bath, and the eco-printing were underwhelming.  The dye bath only had maybe the slightest hint of yellow, unlike the last time.  There's a large patch that should soon be blooming, so I plan to try again with more plant material.  The eco-printing pieces are not bad, but had no definite flower or leaf shapes, which surprised me.  One of the bundles was too close to the water, and the colors were washed out.  A little more research is in order before I attempt it again.  I was excited to realize that some of the flowers in my birthday bouquet were safflowers, and look forward to trying them in my next attempt.  There are also sprigs of eucalyptus, also a dye plant.  With more pears that had ripened, I made a double batch of Amaretto pear preserves.  After cooking, I couldn't really discern the Amaretto, so think next time I would skip that expensive ingredient, and just use the optional almond extract.  Another jar of fruit scrap vinegar was started with the skins and bits. 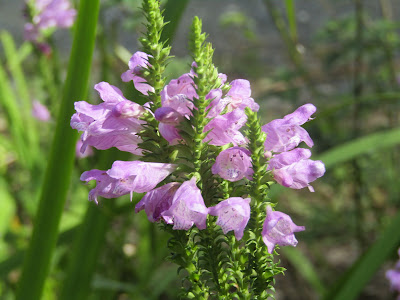 More dog fennel was added to the nest boxes.  That should help cut down on our hay use, as long as it lasts.  J dug post holes, and cemented in the posts for the two gates in our pond garden.   One day, I pulled nine tomato hornworms from the cherry tomato plants, which were given to the chickens.  I had just enough eggplant to make Pasta Norma, which also used our garlic, onions, basil, oregano and chives.  Last week, I worked at a gallery two days, the first time since February.  One of the mornings, not far from home, I passed a man on a cart, being pulled by mules.  Though I do enjoy a good adventure in the city, I'm awfully glad to live somewhere that has a slow enough pace to allow for mules and carts.  The roads here are hilly and curvy too, but rural enough to make it possible.  The second work day, I made several stops, to a thrift store, Food Lion, and a brand new Dollar Tree along the route.  The Dollar Tree was a disappointment, but I found a few things at the thrift store, including clay saucers for .15 ea., and a vase from a local potter which would have been over $100, for $3.  I realized when I got it home, it had a crack that leaked.  I can use it as a vase if I keep the water level no more than half full, but think I may use it as a utensil holder instead.  There were a few deals at FL, including the pup's dog food at $3 off a bag. 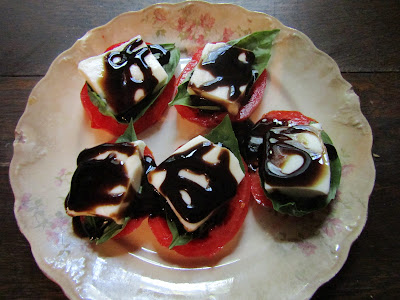 The owners of the gallery had told me things had been slow, and they were.  I had no customers the first day, and made good use of my time wrapping soap, shelling 4 gallons of lima beans, and mending a sweater.   When I got in the second evening, I gathered pawpaws and figs.  Many of our greens seeds are up.  Almost all of the seedlings I started burned up, so J picked up more cabbage, broccoli, collards and kale starts, and planted them on Saturday.  Two more trays of figs were dried.  J picked up library books for me when he was nearby.   On Sunday, I powder coated orders, and put things away that were neglected my work days.  In the evening, I helped J set up our new chicken watering system, which will be much cleaner than the present system.  We're getting close to being done with the chicken renovations.  While I was at work, J pulled all the bean plants, which had been decimated by bean beetles and other pests.  The eggplant is doing well since the rain, and a couple were harvested over the weekend.  Hummingbird food and yogurt were made.  I used our last tomato of good size to make caprese salad., with sauteed squash, asian cukes and pinto beans.  It's been so heartbreaking to read of the fires out west.  They've been in my prayers.  Stay safe, friends.

Sounds like you had an adventurous week! I love being home, but thrifting is always a treat.
I use lavender in my hen's boxes, since I have it growing outside and it overwinters well.

Yes, I agree about the fires. I can't imagine how difficult it must be to live with that threat. Bless them.

Enjoy your week. I hope you get some of the predicted rain for Friday!

I bet your chicken coop smells good. So glad we got an inch of rain the past few days, but more would definitely be welcome this week.

I love the dog fennel story about finding uses for it. That made me smile.

I was happy to find uses for a prolific volunteer.

Busy as usual, I am not sure how anyone gets bored, so much to learn and do.
Dog Fennel... I need to find this.

I expect you have lots of dog fennel too. Were you able to harvest any of the elderberries?