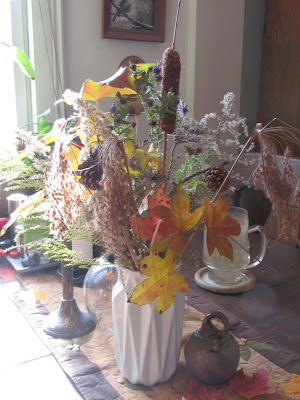 Hello, friends.  Whenever I've previously checked for organic butter at Aldi, they'd had none.  I'm glad I thought to check again, as this time they had it, for $4.25/#, which is the cheapest I've seen in a while.  Food Lion had some for $4.99.  At Aldi, I also got a $1.29 pineapple, and avocados for .79.  I used $1 coupon for cat food.  I picked up photos at Walgreens, got pistachios on sale at $5.99/#, and used a $5 reward.  I found a penny in the parking lot.  The remaining fresh tromboncino squash were used in pasta sauce.  Unfortunately, I had to compost all but a piece of one of the remaining eggplants.  Our tomatoes, basil and rosemary also were used in the sauce.  Last week, my online soap shop had its 11th anniversary and 700th sale, which was hard to believe, as well as encouraging. 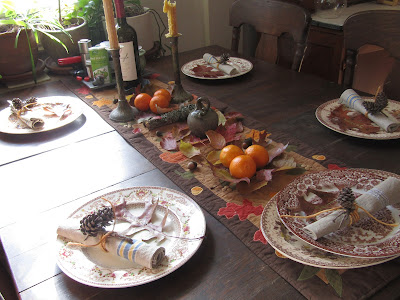 I repaired a boot and a slipper with the hot glue gun.  During the first several years of doing massage, I mostly used my table, then things shifted, and for a number of years, I've been using my chair the majority of the time, so the table mostly sat in it's carrying case.  It had started getting a sticky residue on the vinyl, and nothing I tried seemed to help.  I was beginning to think I'd have to recover it, or buy a new one, which I really didn't want to do at this age.  I googled it, and was delighted to find someone with the same table had had the same problem, and written a tutorial.  It was messy and took quite a while, but the table is 90% better.  I'm happy with that, and very happy to not have to spend several hundred dollars to replace it.  A pottery friend I spoke with at last week's show asked for soaps to carry in her shop.  I delivered them to her, and bartered for one gift while I was there. 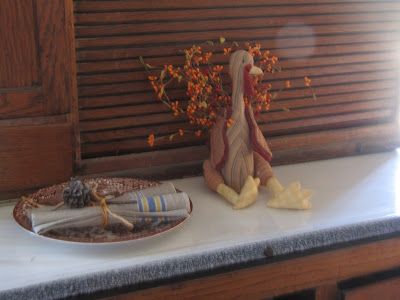 I made swag goal several days.  I answered a question about what I was preparing for Thanksgiving, and won 100 SB (the equivalent of $1).  Thanksgiving was a fairly low key day at home, with M and J's son joining us.   Bouquets were gathered for the house, and natural items for the table.  The mismatched thrifted brown plates were used.  I made pumpkin pie, autumn succotash, cranberry relish, and a vegetarian version of my grandmother's dressing.  J prepared pork loin with carrots and potatoes.  Fresh whipped cream was made to enjoy with the pie.  My dietary recommendations were forgotten for the day.  The night before, I began the peanuts for succotash on the stove, and once they were boiling, moved them to the wood stove overnight.  Back in the summer, I made some lotion.  At the time, it seemed too heavy.  Now that cold weather is here, with the drier air, I'm enjoying using it.  Warm up water was used for humidity on the wood stove.  A bin of shredded paper and cardboard was added to the compost bin.
. 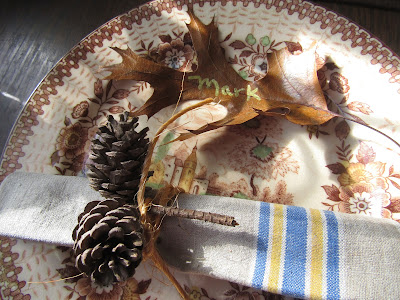 The day after Thanksgiving, I was in the mood for lighter fare, and made Jill's juice for lunch.  I have yet to find a juice I like better than this one.  I finished organizing the upright freezer, using bins I purchased at Dollar General.  There was so much stuffed into the freezer that I could not get it all back in.  Quite a bit was composted, mostly older and freezer burnt packages of okra, squash and lambs quarter.  The chickens got a few treats, including a few figs that had been in there a while, and an English muffin that had seen better days.  I caught up on laundry, and hung it all on the line.  The forecasters were wrong, and it got rained on early morning, so finished drying in the dryer.  I sewed several presents.  For the remaining detail, I plan to dye some fabric with onion skins. 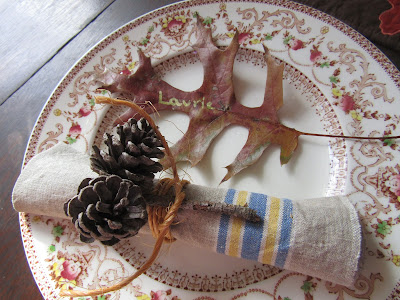 Recently bought presents were wrapped, and I'm again caught up for the moment.  I learned about a site that can tell you whose ancestral land you live on, here, and learned we live on Catawba land.  I've found several arrowheads over the years, and there is an undisturbed Indian mound on private land that adjoins ours.  I'd never heard which people were originally here, and am very happy to now know.  Two batches of thieves vinegar have been mixed up, and are steeping.  If you don't know the story of thieves blend, it's pretty interesting.  The mixture already has the most wonderful scent.  I will be off on an adventure next week, but will be back with details when I return.  Be well, dear friends.

I followed the link and discovered my land was originally "Tsalaguwetiyi, Cherokee east Tennessee." My morning has been spent following rabbit trails to see what I can learn. Sadly, most of the history has been lost due to no written records. It is the reason I consider modern-day blogs so important, a record will be saved for posterity...unless we get hit with a massive EMP then all will be lost again. Sigh.
Jeannie@GetMeToTheCountry

Oh, I'm so glad you followed the link. I've not thought of blogs that way, but you're right.

Congratulations on your successful ventures!

You certainly have no trouble finding things to do. I understand...

What an fascinating thing to explore. I never thought about researching that, but you've tweaked my interest.

Have a wonderful week! Bundle up!

Thank you! There are so many interesting things to learn and do, it's hard to find time for them all.