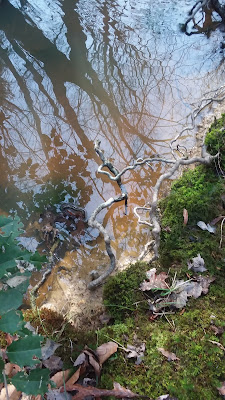 Hello, friends.  I hope it has been an enjoyable week for you.  For Christmas, I gave several jars of pear preserves made last summer as gifts.  A pumpkin pie was made, using our canned pumpkin and eggs.  Cookies were made with pantry items.  For orange zest, I used some I had frozen.  On Christmas Eve, we took our granddaughter out to dinner.  I brought home leftovers to enjoy for another meal.  Biscuits were made for Christmas breakfast.  As they use 6 tbs of butter, I rarely make them.  I made baked ziti for Christmas dinner, using tomatoes from the pantry, fresh oregano and garlic, and basil frozen from the summer garden.  Though it didn't go with the meal in my mind, J requested cranberry relish with dinner.  I used frozen mandarin zest in the recipe.  It used two cinnamon sticks, which after being used in the recipe, I rinsed and added to the water used for humidity on the wood stove, which smelled very festive.  Lots of Christmas music was enjoyed for free on Pandora and youtube. 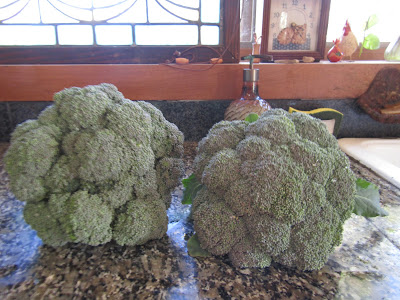 A Christmas tradition of mine is taking a walk in the woods.  The pups and I enjoyed our wanderings.  While shopping for mozzarella cheese, I noticed the store brand had 2# for only .11 more than 1#!  I bought 2#, and will divide and freeze it.  Two heads of broccoli were harvested, and some was used in a broccoli and quinoa dish, which also used our eggs and garlic.  Here's the recipe: 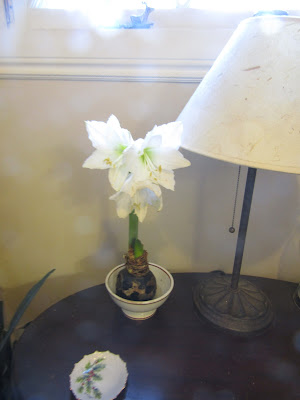 I don't often have sourdough bread for the recipe, as J isn't a fan, so I use what I have.  I first tried making it without the paprika, but it was too bland.  If you don't have smoked paprika, substitute another spice to give it some zip.  During the holidays and the coldest part of the year, we enjoy an occasional hot buttered rum.  I mixed up a batch of the batter, which keeps in the fridge a few weeks.  A $4 coupon was used to purchase dog food.  You might imagine I'm an encourager of other people's frugal accomplishments.  Last week, M brought me an amaryllis.  I'd been looking for one since we got back from Germany.  I was excited to get it, but the best part is he said he got it marked down to $1, and knew I would appreciate that as much as the flower.  Indeed, and well done. 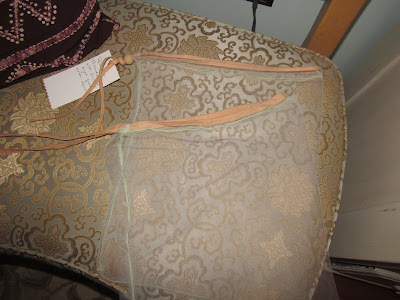 A salad was made for a family gathering, with homemade dressing.  Before the gathering, I took advantage of the beautiful sunny day and 70 degrees.  Five lettuce volunteers were transplanted, and all of the greens were fertilized.  It was good to be working outside again for a little while.  I thought I'd share a finished pic of the gifts I made for several women in the family.  They're reusable produce bags.  The tulle was some I thrifted, maybe close to 15 years ago now.  It was my first time trying to sew with it, and it wasn't the prettiest sewing I've done.  The strings were made from bias tape, also thrifted.  They were dyed with onion skins.  I was able to use wood beads with the thinner tape, but the thicker tape was too big for the beads.  I've saved one for myself, and may make some more.  J & I have had some responsibilities, which have kept us very busy since Christmas.  We're seeing the light at the end of the tunnel, then it's onward into the new decade.  Happy New Year, friends!

Hasn't the weather been a wonderful surprise? We have 64 degrees here in the Piedmont right now and it is the perfect day to be outside with overcast skies. What a blessing.

I love the produce bags! What a fantastic and thoughtful gift!

I'm loving the weather! Hope you enjoy the quinoa dish too.

I am impressed with the heads of broccoli. Never have I grown any close to being that large.
Good job.
Jeannie@GetMeToTheCountry

The cabbage worms usually do a number on the broccoli. Not sure what is different this year, and I expect we won't be able to replicate it!

I have been away from your blog far too long and just spent some time quietly reading and appreciating your (as always) beautiful photography. Here's to a new year, Laurie!

Yes, to a new year! May it bring many good things!

I think I am going to give the quinoa and broccoli recipe a try. Jeff isn't crazy about quinoa, but I think baked with the broccoli, cheese, and bread crumbs, he might like it!