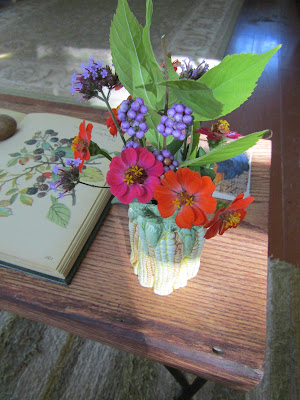 Hello friends.  Last week, I really enjoyed reading a Kindle book I had downloaded for free.  It was a heartwarming story of how the area of Gander, Newfoundland responded to the aftermath of 9/11, by welcoming 6700 people whose planes were required to land there.  As I write this, it is still free for those with amazon prime.  I so enjoy reading about all the good in the world.  I was a bit under the weather most of the week.  The first day, I read quite a bit, went through a pile of previously read magazines to get recipes, etc., and shelled lima beans while watching a show on Roku. I made soup with pantry items, along with our garlic and leeks, and took remedies I had, including homemade fire cider.  We did without heat on nights with lows in the 50's. 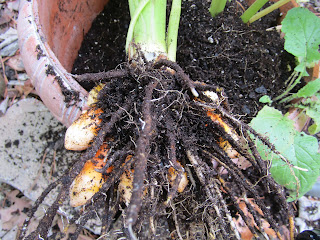 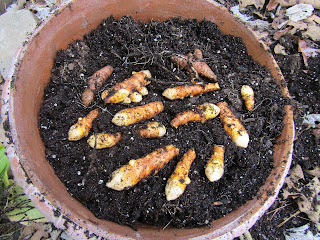 In the past several weeks, I found 4 kitchen canisters at thrift stores.  Last week, I drilled holes to turn them into compost crocks, took photos, and listed them in my shop.  The weather pattern has shifted, bringing us rain, and filling our tanks.  I'm so very grateful for that.  I harvested the turmeric, and ended up with 11 pieces, from the 2 that were planted.  The soil was loosened first with a trowel, then the plants pulled up.  I replanted one of the pieces, to see if I can keep it going indoors until spring.  I plan to put some in a batch of fire cider, and try dyeing fabric with the rest.  I began gathering the dry green beans for seed, and some of the scarlet and peach runner beans. 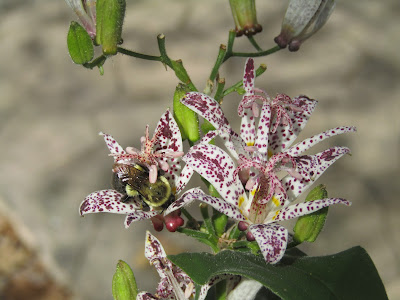 I was feeling lots better on Friday, so on Saturday helped J & his son with firewood.  That may not have been a good idea, as I ended up with a bad cough, and my voice has been coming and going since Saturday.  Oh well, we persevered until dark, and got most of the wood to our land... 3 long bed pickup loads, and two 17" flatbed trailer fulls of huge rounds of trunk.  The lettuce and winter greens are coming along nicely with the rain, and the broccoli has started making heads.  After hundreds of blooms, it looks like we'll only harvest five tiny goji berries this year. 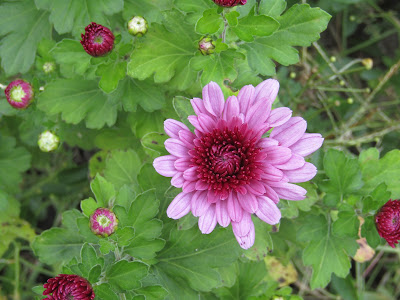 Here it is, almost November, and I'm still harvesting things from the summer garden... several tromboncino squash, eggplant, a couple of tomatoes, a pepper, dried lima beans and a fig were picked on Sunday.  J harvested 4 of the little pumpkins, which are now curing on the porch.  I've been wanting to try making the autumn succotash mentioned in my last post, but between illness and today's unseasonably warm temp of 82, that hasn't happened.  Soon, I hope.  I'm still cutting flowers to enjoy in the house.  Some look a little worse for the wear, but I'll take them this time of year.  I've been curious to see how well my soap cleaned my hair, and used it as shampoo last week.  It did a perfectly good job of cleaning it, though it doesn't feel as soft as shampooed hair.  I would do it again, and will try my homemade rosemary lavender rinse on it next time. 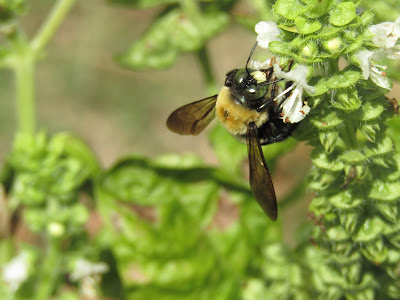 The cold weather clothes and sheets were brought down from the attic.  I went through all my clothes drawers while swapping them out.  There's a box of things to donate, and three homestead T shirts to turn into rags.  I don't think I ever followed up on my Marie Kondo experiment with folding clothes last spring.  I really love it.  It makes it so much easier to see what my choices are, so I did it with all the drawers this time.  The fall mailbox bow and garland was also gotten down, and hung.  I've started a new (free) Kindle book, and recently ran across a youtube channel I'm enjoying, called Fairyland Cottage.  It's about simple, sustainable living, with lots of tutorials.  I'm very excited about one thing I want to try, and will let you know if it works as well as I hope.

Glad you are on the mend.
Did your turmeric still have green leaves when you dug it up? I've never grown it before and am not sure about the timing. I will overwinter mine in the "greenhouse".

We still have zinnias blooming here, for which I'm grateful. I was able to put together a bouquet to surprise a neighbor.

I use that method for my clothes now as well, and my hubby is quite jealous of my neat-n-tidy drawers!

The turmeric did still have green leaves. It had never bloomed, and I wondered if that would make a difference. It was not quite the length of time I'd read it should be before harvest, but I knew I couldn't fit one more large plant in the house. I didn't plant it until late April.

Don't you love that method for folding clothes?!

Do you mind sharing the name of the YouTube channel? We don't pay for cable TV and I love finding interesting YouTube Channels.
Thanks,

Hi Lisa, it's Fairyland Cottage. We don't have cable here either. I hope you enjoy it.