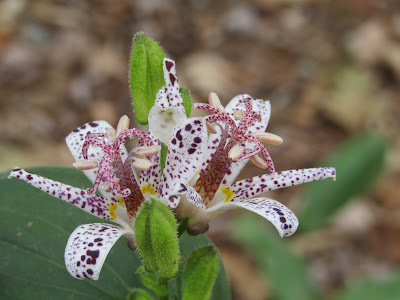 Hello, friends.  While at work on Monday, I shelled almost a 5 gallon bucket of lima beans.  The dried ones were laid in pans to finish drying before storing.  The fresh ones were blanched and frozen. With our water situation, I thought I was going to have to go to the laundromat to help conserve water.  Lo and behold, we got several showers.  Though the forecast only showed a 10-20% chance each day, I think our angels were looking out for us.  By Tuesday morning, our tanks were between 1/3 and 1/2 full.  So, laundry was thankfully done here, and hung on the line.  Scrap paper was used for notes and lists. 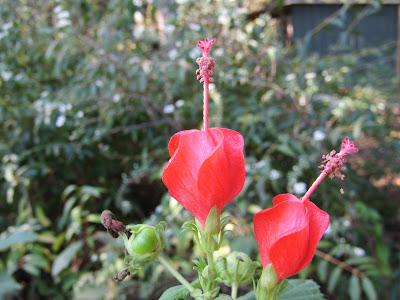 I harvested two pumpkins whose vines had died.  Cleaning the windows is on my list for fall chores. I got the first two windows in the kitchen cleaned. I forgot to mention that we saw Downton Abbey while on vacation.  I thought it was lovely, and J enjoyed it too.  We rarely go to movies, so seeing it on the big screen was pretty special.  While in another town for an appointment, I stopped at Trader Joe's and a natural food co-op.  I brought a cooler for the groceries.  At a thrift store, I picked up two cotton pillow cases for $1.  I harvested kale, and made a kale salad to go along with vegi sloppy joes.  We're still having summer temps, with highs several days in the mid 90's.  The sloppy joes were made for one of those nights.  Hummus and eggplant spread were made the next night, to have with pita bread, along with sliced cucumbers and tomatoes. 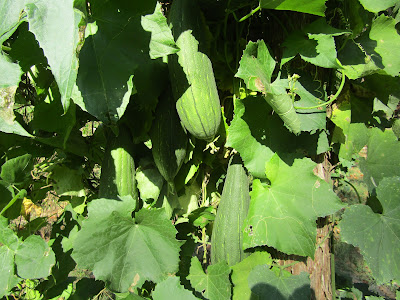 I thought I'd been doing a fairly good job of culling some of the small loofahs, so was surprised to see how many large ones there are.  I'm still hoping some of them will be mature before first frost.  A small butternut squash was harvested, and the remaining garlic harvest was cleaned.  Yogurt was made.  I made another batch of corn ice cubes for the chickens, for the days in the 90's.  Hopefully, they'll be the last ones needed this year.  Though the fruit is definitely winding down, I did manage to have a fruit salad using a pawpaw, a passionfruit, and a fig from here, along with a banana and pear.  I continue harvesting lots of dried lima beans. 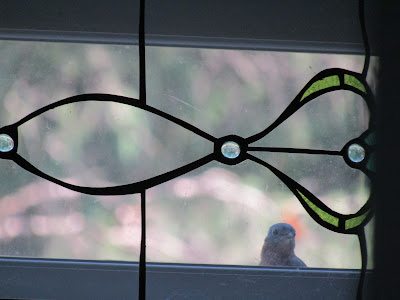 A silly bluebird has been attacking various windows of the house for several months now.  I'm surprised it's still at it in October.  I've read it's a territorial thing, but would have thought that would be done for the year, no?  On Saturday, J & I worked on firewood, cutting up a tree that had fallen at our friends' home.  In between moving brush and throwing wood into the truck bed, while he was cutting, I shelled another round of lima beans and visited with my friend.  Shelling beans is so much more pleasurable while having a conversation with a friend.  Some of the shelled beans were left there.  I had a homegrown breakfast on Sunday, with eggs, tomatoes and garlic.  Fortification for the window cleaning planned. 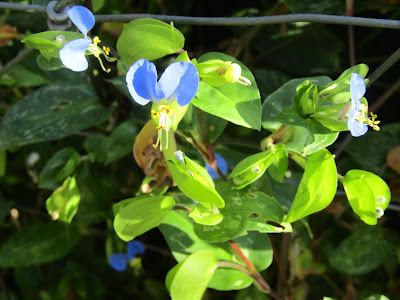 While I washed all the windows, J washed the screens, and then rehung them.  That was a huge help.  I spoke about what I use to clean windows here.  Now I'm ready for the houseplant exodus back into the house, which will happen soon.  My music-loving friend and I are heading to a concert tonight.  The venue is a farm about an hour from here, one I've been wanting to check out for a few years.  I can't imagine a better way to spend an early fall evening.  Wishing you a week of good things.

Window cleaning is on my fall list as well.

I agree about shelling and visiting going hand in hand. Before you know it, you're done!

A farm concert sounds wonderful. Hope you enjoy it.

Yes, shelling and visiting are a good combination! The concert was lovely.

silly bird! We have one here that comes every spring.

I am hoping to see Downton Abbey at the theater but not sure I will make it before it's gone. Windows, ugh. They are on my list too.

I love the birds, but I guess, just like people, there's bound to be a silly one in the bunch.

If I remember, you got a window cleaning set similar to mine, Michele? It went surprisingly quick this year, though I know J taking care of the screens helped a great deal. Hope yours go just as quick!

Five gallons of Lima beans! I am impressed! I love Lima beans. Mine did fine during our drought. Last year I grew so many I actually got tired of them during the winter. Can you imagine??? Tired of Lima beans - never thought I would say that. This year I tried growing a few different beans but wasn't pleased with any of them. Next year I will try some others.
Jeannie@GetMeToTheCountry

I'm in a similar place this year, Jeannie. I told J we needed to grow fewer lima beans next year. I hope you have a better bean year next summer.