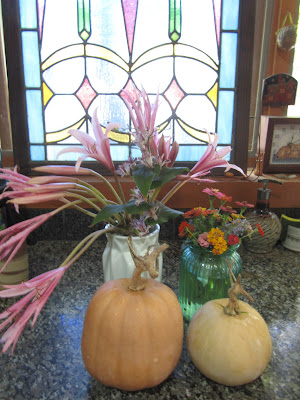 Hello friends, I gave the pups a bath on one of my better days, when temps were in the mid 70's.  After working in town, I picked up a book from the library, and went to the discount grocery store.  Sadly, I found the food section continues to shrink.  I used a $5 coupon at Big Lots, and bought holiday cards and some small gifts.  I bought a huge pomegranate at Food Lion, then a couple smaller ones at Aldi's.  I love using them in green salads.  I went by Tractor Supply, and used a 1/2 off coupon for a premium bag of dog food, which made it several dollars less than their usual food.  I've been learning about reasons for the current high incidence of cancer in dogs, and am trying to feed them more along these recommendations.  Though they had been mostly eating grain free, most kibble is still largely carbs (peas, potatoes, etc.), which is not natural for them.  They don't list the % of carbs on labels, but when you see the % of protein and fats, you realize the remainder of approx. 60-70% is carbs.  Ideally, I'd give them a high quality canned food, but it's priced out of my range.  I did buy one can, called Thanksgiving dinner, which I'll save and give them as a treat on Thanksgiving.  The pups continue getting chopped vegetables, yogurt and occasional eggs.

I harvested swiss chard, which we had with pinto beans and brown rice.  Thyme was harvested and dried.  The respiratory infection really varied from day to day.  On a not so good day, being ready to be done with it, I made vampire slayers soup.  As much as we like garlic, it was a bit much for us (4 roasted heads, plus more diced).  Besides our garlic, it used our thyme and homemade broth.  I did finish mine, and had the small amount leftover for lunch the next day with kale salad.  J took a few bites, then decided he'd rather have fish sticks and fries :o).  It did seem to turn things around, which was good, as the following two days, I needed to work at one of my occasional jobs.  Meandering by the pond one day, I found a giant puffball.  I diced and sauteed it, then used it in a recipe later in the week, a cheesy pasta bake.  Another meal was pasta with pesto from the summer's garden. 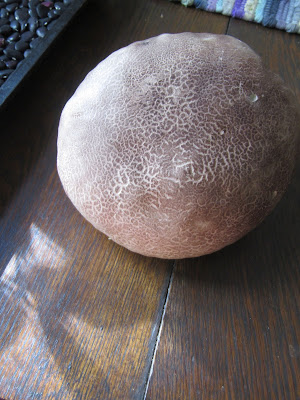 I switched the summer and winter clothes in my closet, and filled another box for donation.  I'd been hanging on to three dressy, long dresses "just in case".  I hadn't worn any of them in 10 years, so it was time to let them go. I passed a few things on to my niece.  With lows in the 30's in the forecast, I picked all the tender veggies and herbs on Thursday... eggplant, sweet peppers, tomatoes, tromboncino squash, a fig, lettuce, basil, lemon verbena, and lemon balm.  I harvested more chard, and another 5 gallons of lima beans, a mix of dried and fresh.  There are still some beans higher than I can reach, but that should do it for the beans.  It's certainly been a banner year for lima beans!  I was surprised how much in the garden there still was to harvest.  The lemon verbena and balm are being dried for tea.  For my work days, I pulled single serving leftovers from the freezer, and pulled black bean burgers for dinner one of the nights, freeing up more room in the freezer.  All the lima beans were shelled while at work (minding the shop at a pottery gallery).

After we got in from work Friday evening, we dug our sweet potatoes, and were surprised by the nice harvest.  We also harvested some winter squash, and I cut flowers to enjoy in the house.  We've gotten light frosts, and expect a freeze  tonight.  This afternoon, my niece and I joined a group hike to the highest point in this county.  The hike was a 400' vertical climb, and then whoever wanted to could climb another 140' up the fire tower, to see above the tree line.  It was the perfect day for it, great exercise, and the view was fantastic.  We could see Pilot Mountain, which is approximately 60 miles away.  I had my metal water bottle, but didn't want to carry the weight up the mountain, so got one of the small free bottles offered.  On the way home, I stopped and picked up free tissues at Big Lots.  It's now been at least three weeks since we replaced the gas cap on my car, and the light has stayed out.  Hooray for a cheap and easy fix!  On the other hand, we're still having fridge issues, so we're planning on letting it defrost for 24 hours soon, and see if that doesn't fix it.  Friends had what sounded like the same problem, and that's what they did, which fixed theirs, so we're hoping.  Wishing you a beautiful week.

Curious to know why the food section of the grocery store is shrinking?

Sounds like you'll have a full freezer with all of your garden goodies. I am hoping some of my starts get off the ground. We've had frost 3 days in a row, with colder overnight temps expected next week. I'm not complaining though!

Glad the garlic did the trick for you. It is amazing.

Hope you are feeling strong this week and can get some fun worked into your days!

The discount store started out all groceries, and then began adding other things. Since then, the owner has died (he owned huge amounts of property in this area), and his heirs have been moving more and more towards stocking "stuff" instead of groceries. At this point, only about 10 or 15% is groceries. I asked the cashier if it was going to continue to shrink, and she thought so. It's the only one nearby, so I was sad to hear it.

I hope your seedlings thrive!

Thanks for sharing the Vampire Slayer Soup. I'm keeping that on hand for any sickness this winter.
*We went through household and pantry items to take stuff to our older daughter who just moved into her first apartment. It was a blessing to find stuff on hand that she can use right away and won’t have to purchase.
*We have been conserving gas and not really driving too much. This is a double blessing because the less I go to town and to stores, generally the less I spend.
*We’ve had a few small savings like a few dollars through Ibotta and Rakuten for items that were planned purchases. We also sold an item on ebay that was free to us so that went into savings.
*I have been much better at using up every last piece of food and whittling our grocery bill down to what I suspect is the lowest it will go with my new nutritious eating plan for the MS diagnosis. I am really loving the bone broth I’ve been making from the chicken bones and leftover bits of organic vegetables. It’s really good!
*We got the space heater for the large living area out of storage, and my husband used the Shop Vac to make sure it was clear of dust. We’re trying to only use it first thing in the morning to take the chill out of the living area while the fire in the wood stove gets hot enough to start heating the house.
*I started using the free version of the Every Dollar app by Dave Ramsey. We’ve had a written budget for a long time, but I have a hard time keeping up with the tracking of spending to see how close we come to the plan each month. I started this last month and it’s definitely helping me track the spending in the different categories so we can make better budgeting decisions.
I have a bit more on my blog! https://www.cozyhomemaking.com/frugal-fun-homemaking-for-end-of-october-2019/

It sounds like you're doing wonderfully, Jenny! I think it's an excellent idea to support yourself with nutritious food. I look forward to checking out your blog.